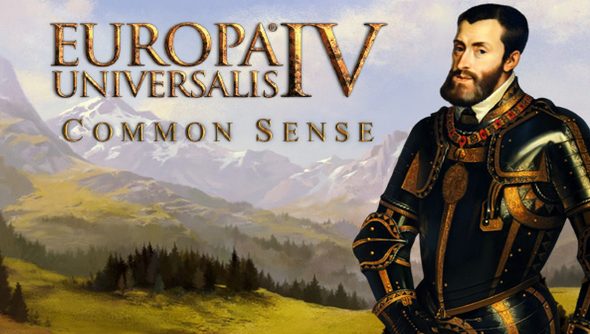 Common sense is not a trait I’d ascribe to my rule when playing Europa Universalis IV, but the grand strategy game’s upcoming expansion, Common Sense, should provide tools for the barmiest of leaders as well as more thoughtful rulers who want to fine tune the growth of their realm.

Inspired by the pamphlet of the same name written by Thomas Paine in Revolutionary America, Common Sense focuses on the art of ruling and the shift away from absolute monarchies to nations led by parliaments.

Paradox says that the biggest addition to the game is the provincial development system.

“Building space in a province is now limited by its terrain and Development Value. The more developed a province is, the greater wealth and power you can squeeze out of it. By spending monarch points, you can now customize your trading hubs or make great recruiting centers.”

By cutting down the number of buildings that a province can construct to fewer, more powerful buildings, Paradox hopes that it will generate more meaningful decisions.

Parliamentary rule has been thrown into the mix, as well. Laws can be passed through parliaments in constitutional monarchies like England and other nations with constitutional governments.

Both Buddhism and Protestantism have been overhauled, and Protestant kingdoms will be able to customise their religion, making it more distinct from Catholicism.

If you’ve got a lot of vassals and colonies, Common Sense throws you some new tools to bleed them dry or keep them in line, so the expansion isn’t just about progressiveness. Tyrants get new tools, too.

Governments will be able to rank up, and don’t worry, there won’t be any empire level grinding. As they grow from wee duchies to massive, continent-spanning empires, they’ll simply get new benefits; rewards for being an awesome ruler.

Expect a slew of free updates and changes accompanying the expansion when it launches on June 9th.