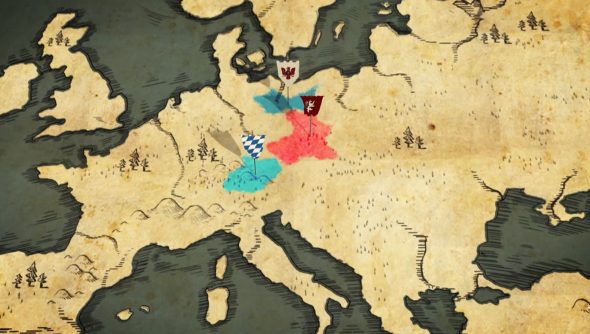 If I wasn’t poor, cheap and the proud owner of a shrivelled up heart, I would probably put Europa Universalis IV in every Christmas stocking in the UK. It’s all sorts of brilliant. But in lieu of this, I will instead inform you that Paradox’s grand strategy flagship has been expanded with yet another meaty chunk of DLC: Art of War.

Take a gander below for some hardcore map and flag action.

Over a hundred new nations and 900 more provinces have been stitched into the giant map, particularly affecting non-European countries. This has been done with the aim of “giving the rest of the world the attention to historic detail we’ve always given Europe,” says Paradox.

Expect to see changes to the Inca, Aztec and Manchu empires, which have been broken up; West Africa, because it’s now more divided; and India, as it’s now fat with provinces and wealth.

Since it’s the Art of War, the biggest changes aren’t to the number of provinces, but to dirty rebels – now unrest is a national issue, and stamping out rebels in one province won’t be enough – and the Reformation and Counter Reformation, which can spark a war over the Holy Roman Empire.

There’s a focus on specific periods, too. You can get your fill of hostility and arguing in The Thirty Years War and Napoleonic Era, which highlight the changes to religious conflict and revolutions, respectively.

It’ll set you back £14.99, but as always, the DLC launched with a free patch for everyone, which chucks in the new rebel mechanics, a new Cardinal system for the Catholics, and an autonomy system that makes provinces with more autonomy less likely to revolt, but also not big earners.