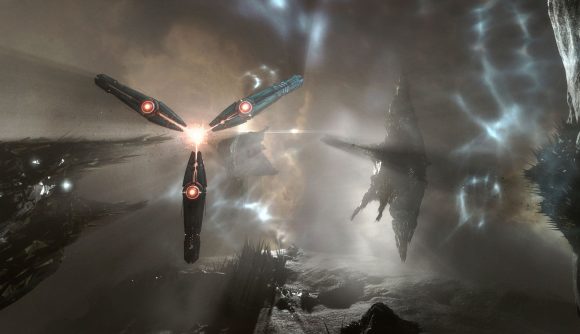 EVE Online is seeing concurrent player numbers regularly hit the 40,000s each weekend, which is the healthiest figure since the middle of 2016. That’s according to senior brand manager Sæmundur Hermannsson, speaking with us ahead of EVE Fanfest today and the beginning of the third and final chapter of the ongoing Triglavian Invasion storyline.

“Just now, the whole world is at home, so every form of entertainment is of course having a bump, but the increase in online player numbers is a trend we’ve been seeing since August/September last year,” Hermannsson says. “So the pandemic has not changed any trend, it’s just accelerated it. […] We are now over the weekends hitting regularly 40k concurrent players, and we need to go back to mid-2016 to see those numbers steady.”

A dev blog from March expands on this. As part of a major crackdown against botting, EVE’s player numbers reduced “noticeably”, since when “concurrency has more than fully recovered, but instead of bots we have a host of genuine new players taking their first steps in EVE alongside returning veterans. A substantial portion of the development team is working hard on embracing these new players.”

EVE has long had a reputation for being impenetrable, even intimidating, in its depth and complexity, and the developers have been determined to shed this. Outreach was a big part of last year’s Invasion World Tour, which stopped in nine cities in nine countries in nine months.

“We hammered home at every stop that we were focusing on new players and investing in the foundation technology of EVE. And we learned that while the veteran community understood where we were going – because more players for them means there’s more content in a sandbox MMO – we also needed a segmented focus on the veterans too, which is where our quadrant system comes in, with these more frequent iterations of content and balance changes for them.

“This investment is paying off, and it is for the long term.”

You can be a part of the resurgent phenomenon through the EVE Online website or Steam – it’s free-to-play.