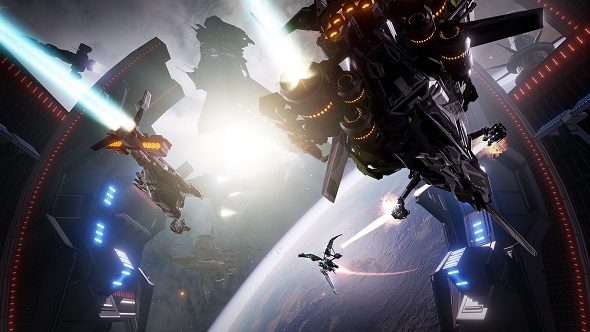 Upon release, Eve: Valkyrie was cited as a showcase for the capabilities of VR. Virtual reality is at its best when you’re one-to-one with your in-game avatar, so space sims are the perfect match for PC players sat on an office chair, your gaming station transformed into a sci-fi cockpit. Despite its obvious benefits, however, the high cost of current VR hardware is too great a barrier to entry for many. But CCP are about to tear that barrier down, opening Eve: Valkyrie up for everyone who owns a PC and PS4 on September 26.

If you love your headset, check out our list of the best VR games.

Eve: Valkyrie has been a VR-only game for 16 months, so you might be thinking ‘why now?’ It’s simple, really – CCP decided to develop the flatscreen version because it was by far the most popular request from their community. “We didn’t give it serious thought until the beginning of this year, then when we started experimenting with it internally we found that it’s just a really good, fun game, even in [on traditional monitors],” lead game designer Andrew Willans tells me. “You don’t have that sense of presence that you have with VR – it’s undeniable that when you’re sat in a cockpit in VR and you’re looking around, there’s a real sense of immersion that you can’t equal on a 2D display. But the actual gameplay, the fun, the competitive edge, I think it’s all still there.

“It was something we wanted to do for Valkyrie in order to grow it. We’re a multiplayer game first and foremost, so it’s really important that we build our community. The bigger our community gets, the more we can invest in social tools and features that people really want – stuff like streaming tools, private matches, and spectator cams. All those cool features that we’re itching to deliver. Hopefully this is opening the door to a new demographic of players, as mouse and keyboard and non-VR means we can increase that population to the benefit of everyone.” 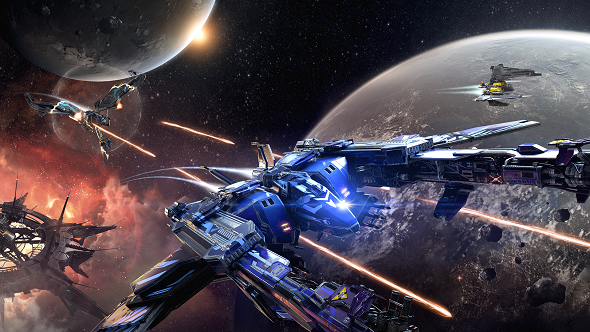 Of course, VR does have its advantages outside of immersion, from depth perception to the ability to freely look around as you pilot through the black, so CCP had to come up with some clever solutions to offset at least the latter for non-VR players. The default control configuration on a gamepad, called Valkyrie, pivots your ship as you rotate the right stick, but there’s a configuration called Owl that puts the right stick in control of head movement, allowing you to pull of advanced targeting techniques.

Along with the all-new keyboard and mouse support, all controller configurations were balanced throughout the process, the development team setting up games with a variety of different settings to test things: VR users and non-VR, Owls and Valkyries, keyboards and controllers. “So far it feels really good, it feels fair,” Willans says. “We’re not seeing any advantage on any one platform or hardware, and everyone is having a great time.”

Most of the changes required to make a non-VR version work actually took place outside of the gameplay, in the menus. The team already wanted to revise cockpit UI for VR, so they did that at the same time as working on the 2D version, introducing clearer icons and tidying the interface up. 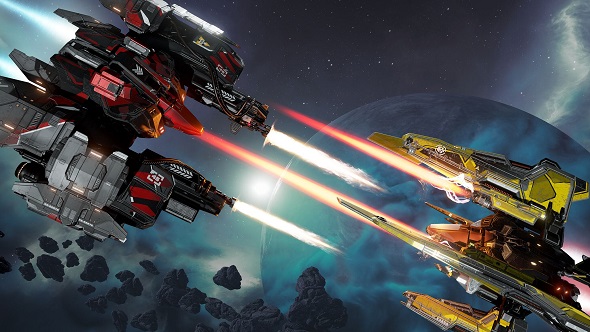 “With VR you have this infinite space, you can look anywhere,” Willans explains. “So you can be sat in a huge hangar area, looking around with text on the walls and menus and different interfaces. Although the challenge in VR is trying to grab someone’s attention, to focus them on a specific thing. The challenge when you move to a 2D display is getting all of that information on a single screen. We had to take a lot of time to redesign the menus and have a flow of menu information displayed. It was about making it as ‘wow’ as possible, both in VR and non-VR. Some of the menus are different, depending on what hardware you’ve got in. That was a deliberate decision to make sure we played to the strengths of both.”

If you already own Eve: Valkyrie, you’ll get access to Warzone for free. Anyone who buys the base game after Warzone’s release will also get the update along with all the content that’s already been released during the game’s first 16 months. Perhaps Warzone will, ironically, be the update that convinces a few more players to invest in a VR setup.

For an idea of what else is coming in the free expansion, check out our dedicated article.