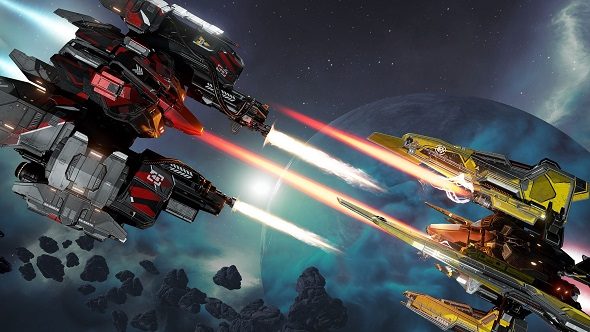 On September 26, Eve: Valkyrie is changing. Its Warzone expansion is the largest update developers CCP will have ever released for their space dogfighting sim, overhauling game systems, reworking progression, adding new ships and maps, and even opening up the VR game for those without a headset, thus populating it with fresh players to disintegrate into space dust. It’s not about adding more for the sake of it, however – Warzone is just as much about stripping things back and ensuring each ship performs a specific function.

Check our list of the best space games for more battles among the stars.

“We were wrestling for a long time with the fact that we had too many ships in the game, and there weren’t enough real differences between them from a gameplay perspective,” lead game designer Andrew Willans tells me. “We took a long, cold, hard look at what we have in the game to see how we could dial the personality of those ships up to 11 and make them far more iconic and representative of class ships.”

Rather than having all these visually distinct but functionally similar ships, the team decided to condense it down and highlight ship roles. When Warzone releases, Eve: Valkyrie essentially turns into a spacefaring hero shooter – Overwatch at lightspeed; a team-based FPS where there’s no up or down.

“We had nine fighters in Valkyrie and that’s now condensed down into four assault class ships,” Willans explains. “We were very influenced by first-person shooters and a lot of team-based shooters, so we were looking at how we make those personalities more distinctive: the Wraith became our assault rifle; one of the new ships is a sniper; we have more of a shotgun personality; and we have an LMG and SMG style. It was really about ‘what do we want from Warzone?’ How do we bring out the importance of the ships, the interplay of the ships and the classes?” 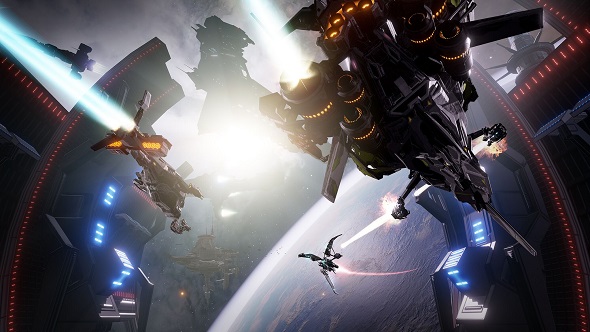 Warzone adds an entire fleet of these class ships – four assault, four support, and four heavy – each with its own range of abilities and a unique ‘ultra’ ability. If you’re thinking of Overwatch’s ultimate abilities, you’re not far off – they charge through the course of a fight and they’re potentially game-changing if deployed properly. To get to grips with the new stuff, there’s an all-new Flight School, which is a reworked tutorial area that will allow you to train without consequence and discover the intricacies of each class. You’ll want to head back there and train, too, since you can customise your ships to suit your playstyle.

“New for Warzone is a modification progression system for every single ship,” Willans says. “So as you fly a ship and get kills, you earn XP for that ship. You can then invest that XP to craft modifications for it. There are a range of flat upgrades and trade-offs. For example, one might increase your damage per round. Another modification might increase your acceleration, but the offset for that is a lower top speed. So we have a mix of flat upgrades and trade-offs on a progression tree. Players can then invest their XP to craft different modifications. They can only assign four modifications to the ship, so those go into four different categories: we’ve got attack, defense, mobility, and tech. Tech covers the abilities of the ship.”

In total, there are 12 of these modifications. They’re not about min-maxing, instead they’re used for pushing your ship in areas where you excel. In other words, you can’t change a ship’s class, but you can make a sniper ship great at running away, or modify a shotgun ship to close range as quickly as possible. If you’re more into tinkering with the look of your ship, however, new loot capsules will scratch that itch, letting you pop open containers and unlock vinyls and paint for your craft, new pilot outfits, XP boosts, and even in-game currency to buy more of them. Again, imagine Overwatch in a snug space suit. 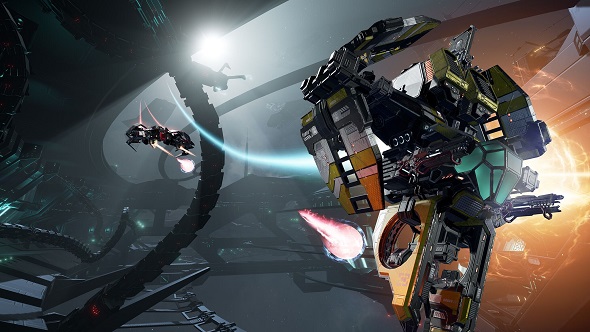 Once you’ve tarted up your intergalactic ride, strapped modifications to it, and learned how to fly it in Flight School, you can fight across two new maps. The first, Fleet, is based on a Sisters of Eve environment and has you fighting around a space station between battle zones. “If you imagine having a fight in the middle of the M1 – just a busy motorway of space traffic and you’re having a battle amongst the stars and stations,” Willans explains. “The other map, called Outpost, is like a haunted house in space – it’s really dark and moody and has a central structure which houses drifter technology, which is part of the fantasy for this expansion.”

Once it’s out in the wild, Eve: Valkyrie’s meta will undergo a seismic shift. People will begin to settle into roles, and certain ships will rise to the top. It’ll be interesting to see who becomes the Hanzo main of the Eve-verse. Perhaps it’ll be the new Covert class, a ship capable of turning invisible for short bursts. Of course, whatever happens, CCP will be on hand to react.

“We pay close attention to the forums because we’re a very strong, community-focused development [team],” Willans explains, “but when we release ships, balance changes, or new abilities we closely monitor it to ensure that if there are any problems, it’s actually the voice of the majority, not a vocal minority. You’ll always get someone who says ‘that’s my favourite thing in the game, why did you change it?’ That might be just because they got ten kills every match because of it. We’ve gotta do a bit of due-diligence and look into it. If something is clearly wrong and someone finds something, like a ship is overpowered, for example, it’s much clearer. If something isn’t working as intended, we can jump on it straight away with a quick game patch. The real challenge is drilling down into what people like about the ships and why. It helps us develop new ships and abilities.”