Eve: Valkyrie doesn’t waste any time in acquainting its players with shock and awe. Flying a routine escort mission, your patrol spots distant flashes of light. They turn out to be ships, many times larger than the fighter class Wraith you’re strapped into. They warp in one after the other, thut-thut-thut, decelerating in an instant like beach balls hitting water. Except that the Amarr Titan doesn’t look like a beach ball – it looks like the business end of a Death Star, and acts like one too.

You’re given a couple of seconds to listen to the terror of the soldiers in your earpiece as yellow energy whips across the Titan’s surface, before debris splinters your tiny windshield. Then you’re dead. And this is the tutorial.

“That mission is just a bit of a lead-in,” says CCP Newcastle’s David Little. “To get people acquainted with the lore behind Valkyrie.”

Valkyrie is intended for a much wider audience than that of Eve Online. It’s the perfect Oculus Rift launch title – promising the familiarity of an Xbox controller and the static comfort of a cockpit from which to explore this brave new medium.

And yet those opening moments are very much fan service. When CCP Newcastle pulled up art from Eve Online, they found that some ships weren’t detailed enough for the magnified universe they were building in Unreal Engine 4. So they had their colleagues in Reykjavík dredge up nine-year-old concept art, and recreated every rivet of the colossal vessels in the MMO. When CCP showed that shiver-inducing sequence for the first time at FanFest last year, the crowd roared.

“The lore of Eve is so rich and so deep that we need to embrace that,” reasons Little, “and also give something back to the fans. We’ve got access to so many awesome assets in the Eve universe.” 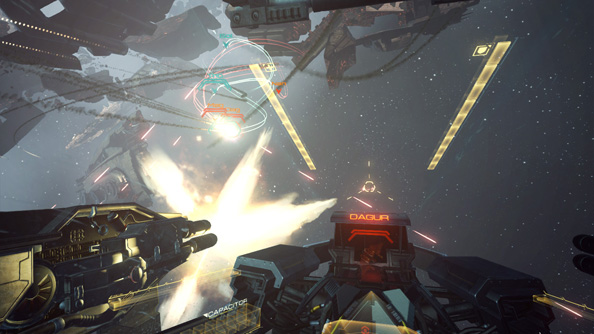 It’s the scale that’s been a revelation. While players dart about in ships of equivalent size in competitive multiplayer, the doomed escort patrol has you weaving between capital ships, a minnow in a vast, black lake.

“I’ve played a bit of Eve in the past, and when somebody warps to you, it’s that intense bang, bang, bang with the ships coming in,” Little enthuses. “That’s the kind of feeling that we want.

“You’re actually in that battle. And seeing it from that perspective, you’re tiny compared to them. You see these fighters swarming out. Suddenly you’re just like, ‘Wow, I’m dead here, man’. There’s something exciting about that, you know? That’s exactly what we’re trying to get at.”

Little tells me that this single scripted mission is simply an on-ramp for multiplayer, and that CCP don’t have any current plans for a single player campaign (“There’s definitely something there, but I can’t really say whether it’s going to happen or not”). I think he’s mad. But in all other respects, the Newcastle team’s narrow focus has served them extremely well. 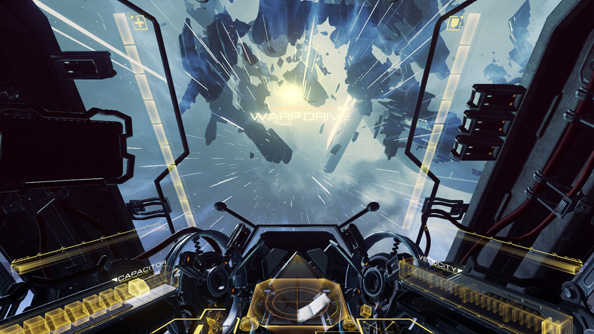 Only a handful of the staff behind the original Eve VR prototype came over from Iceland, and even now the team numbers just 15. It’s a conscious effort made to ensure the passion of that first incarnation is preserved in a new engine. So that Valkyrie still feels like a labour of love when it’s released.

The fact that work on the dogfighter began in lead programmer ‘Siggi’ Gunnarsson’s spare time, back when VR was still a holodeck pipedream, has granted CCP a certain momentum – even as major industries forces like Ubisoft announce their intentions for the form.

“We’re not bothered about what other guys are making,” says Little. “Good luck to them, there’s room in the market for everyone. [But] we’ve got so much confidence in our game. We know that what we’re doing is good.

“As soon as VR is commercially available and out there, we’ll be there with it as well. We’ve invested so much time and energy into this that we just want to be there and be remembered for creating an awesome game at launch.”

In this sponsored series, we’re looking at how game developers are taking advantage of Unreal Engine 4 to create a new generation of PC games. With thanks to Epic Games and CCP.