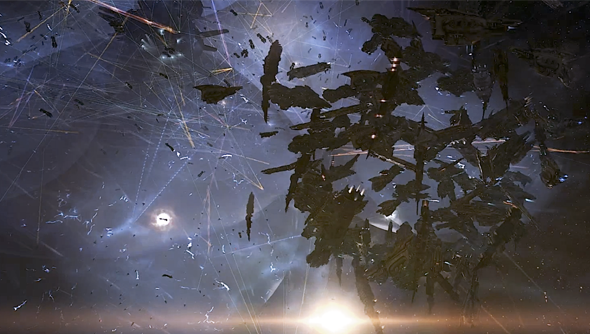 This weekend saw the 6VDT system play host to Eve Online’s largest battle thus far. More than 4,000 ships from the Test and CFC alliances turned up to take part in the conflict and what turned out to be a decisive victory for CFC, possibly marking the withdrawal of TEST from the Fountain region.

There were explosions, thousands of dead pilots, and rehashed Lord of the Rings quotes.

According to CCP, 4,070 pilots turned up to fight for the their alliance. That’s over 400 more than P-2TTL, the previous largest Eve battle, and 900 more than the Battle of Asakai.

According to Vily, a fleet commander in the CFC, Sunday’s battle was the culmination of a war for the Fountain region which has waged for the past two months. It is strange that it happened now and in 6VDT, though. “6VDT-H is not anywhere near the strategic level it used to be,” Vily writes. “Its use as a transit hub is mostly diminished, and it no longer represents an active military base for more than a fraction of TEST’s forces. However, the morning after the initial attack, we awoke to a surprise: All TEST operations for the following two days had been canceled. All forces were to prepare for a defence of 6VDT on Sunday the 28th of July. This was where they would hold the line. This was where they would end our advance.”

As soon as ships began entering the system to form their battle lines the game began slowing down. To manage server load during big battles, CCP artificially slow the game clock, allowing them more time to process all the action. During Sunday’s battle the game was running at 10% of its normal speed. This is part of the reason the battle took more than eight hours to be completed.

CFC arrived on the field first and took up positions about the space station at the centre of the system: “we created a spherical wall with a roughly 80km edge from side to side. Spread out this much, we were almost entirely invulnerable to bombers, while at the same time within range from both sides for our Megathron guns to target any ship that came at us”.

Before the battle began, commanders of both armies issued speeches:

“I see in your eyes the same fear that would take the heart of other alliances,” said BoodaBooda, CEO of TEST’s Dreddit corporation. “A day will come again when the courage of Test fails, when we forsake our allies and break all nips and agreements. But it is not this day. An hour of prophecies and AHAC wrecks when the age of Test comes crashing down. But it is not this day. This day we fight. By all that you hold dear in Nullsec, I bid you, stand. Pilots of Test!”

“The foe is doing morale pings with LOTR quotes,” responded the_mittani, Goonwaffe of the Goonswarm. “We’re not going to bother with a morale ping because we’re in the system first, we have seven Baltecfleets, one AHAC fleet, two Bomber wings, one FuckYouFleet, and yeah.

“GSOL are heroes: after the work of our capfleet in destroying every single hostile tower in 6VDT, GSOL threw up 26 towers in 6VDT last night , blocking every single moon. The enemy has no safe towers: nowhere to run, nowhere to hide, and must bridge into our force.”

CFC aimed for the leaders of the TEST army, “Damnation command ships and heavy interdiction cruisers (hictors) were the focus of our attack, and there is no force in EVE that can withstand the guns of a thousand Megathrons. Armored to the nines to insure survival and allow a functional chain of command among the N3ST forces, their plan failed. All the leaders of the N3st forces that we could identify were targeted and summarily executed.”

According to The Verge, more than 2,900 ships were destroyed, largely on the side of the TEST alliance. Particularly as, rather than evacuating as many ships as possible when the battle was lost, 200 ships took part in a suicide run at the close of the conflict. They managed to destroy one dreadnaught.

We’ll provide more coverage of the conflict as details emerge.