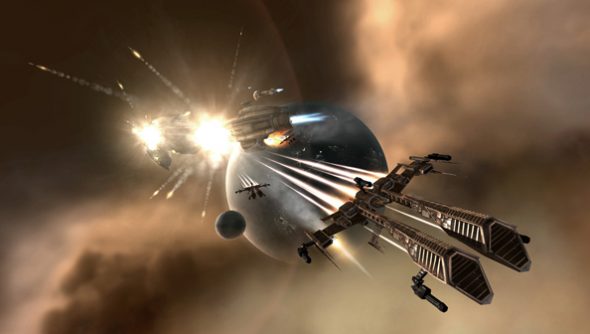 A former leader in humongous Eve Online alliance S2N Citizens has exploited executive power to disband the group and make away with somewhere between 250 and 400 billion ISK. The thief had secretly joined Clusterfuck Coalition alliance Circle-of-Two, and been educated in the arts of corporate backstabbery by Goonswarm Logistics Director Xttz – veteran of another memorable Eve disbanding.

The Mittani report that the spy, believed to be former S2N Holdings director Diplo, had been relieved of his position as a member of S2N ‘high command’ some time before the jacking. However, Diplo retained his roles and access in the broader S2N Citizens organisation. He was able to seize control of S2NC by stealing shares and triggering a shareholder vote – making away with the alliance and kicking the corps that belonged to it.

Jean Learner, director of S2N affiliate Nulli Secunda, cast doubt on the identity of the spy, but told players on Eve-favoured instant messaging serviceTEST Jabber that the crime was committed by a player using Diplo’s account.

“Whether it was actually him or one of the handful of people we knew had the login to the account is yet to be confirmed,” said Learner. “We do know he was not at home when this occured though.”

Though Learner couldn’t offer an “exact number”, the director did say that the spy had taken hundreds of billions in ISK from S2NC’s in-game wallet. The cash had been paid by smaller groups renting stations from S2NC, and made up about a third of this month’s payments. For contrast, note that probably the most expensive ship to go down during April’s Burn Jita 2 cost just six billion ISK.

Worse, renters of at least 33 stations owned by the holding corporation will lose control of their homes until they can be reconquered and taken back from the thief.

Thanks to the quirks of Eve’s war declaration mechanics, the corps which had until now operated under the banner of S2N Citizens are locked out of alliances for a week. SOLAR Fleet have mobilized to reclaim territory lost as a result of the jacking.

“We’re running around with large capital fleets grinding the entire east in 24 hours,” said Learner. “Fun times. We’re not sure how long its going to take to shore up.”

Goodness me. What a shame for all of those poor players. Hang on – is that a smile on your face, dear reader? Are youenjoying this?