What can PC roguelikes stand to learn from mobile games? Not from their nearest equivalents, like the uncluttered deep delve of Pixel Dungeon, but the likes of Galaxy on Fire – the space combat and trading sim that twinned player freedom with an ethos of instinctive, instant gratification.

We’re going to find out. A 12-strong Hamburg team have broken off from Galaxy’s Fishlabs to put together a roguelike space shooter in Unreal 4 – something that eschews the pixel art and grid mazes that are easier bedfellows of procedurality in favour of high-end production values.

“Those are the things that we took from Galaxy on Fire to Everspace and said, ‘This is how we want to make a PC space shooter’,” says Rockfish co-founder Michael Schade. “There are those fantastic simulations like Elite and Star Citizen – I think that’s cool. But we won’t have travel times of 10 minutes from one system to the next.

“With a blink of the eye, you see a planet in the distance, you click on it, and bang, you’re there. We know that’s not the reality, but our game’s not about reality. Our game’s about fun.”

Schade’s team had played lots of Rogue Legacy and Binding of Isaac – but he was concerned initially about the frustration inherent in roguelikes. Reassurance came from an unlikely source: Middle-Earth.

“I have to be honest, I was at least on the fence, if not critical of that working with a high-end game,” he remembers. “[But] I got a feeling when I played Shadow of Mordor. I’m not very good at Shadow of Mordor – I died a lot. And I was so mad about those bigger orcs and such.

“Then I realised that every time I die I get a little bit of XP, and I can improve my skills. Next time, I’m better and I kick their butts. That was very satisfying.”

Everspace is similarly selective about the belongings it rips from you upon death. You’ll keep your credits, blueprints for ship parts, and any permanent upgrades – perhaps a powerful engine you’ve engineered. What you’ll lose are the resources you carry around: ore for repairs, and fuel to keep you moving.

As you drift through the void, support characters can show up to offer missions; a pirate trader, maybe, carrying cool weapons. But these are no static NPCs – turn them down, and they won’t come back. 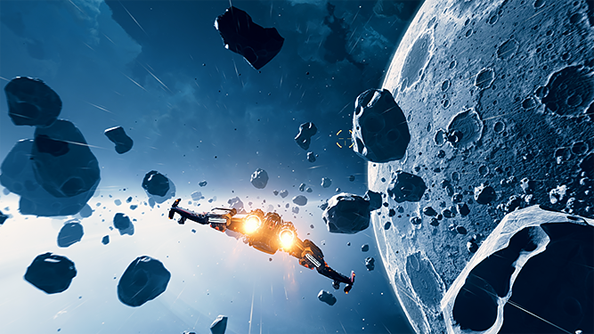 “It’s the same in real life,” notes Schade. “If you meet somebody on the street, you don’t know when you’re going to meet them the next time, or if. We like that.”

Everspace’s storytelling will sidle up in much the same manner. You’ll begin the game with just one bit of information – a destination. And each time, Rockfish will throw you “bits and pieces” of the plot.

Scraps of story will be delivered upon death, and after you’ve killed any of Everspace’s 11 bosses. “The whole puzzle sooner or later fits together”, claims Schade – and the big picture promises to be, well, a bit odd.

“The core loop includes dying,” notes the former Fishlabs co-founder, carefully. “So we need to come up with some where you can die and be reborn, and it still makes sense. Your death and the death of all the bosses has a meaning and fits together.”

Not so long ago, Rockfish uploaded a .gif to Reddit which showed a ship cleaving an asteroid in half with its mining lasers – cutting a precise path through the rock. It clocked 1.4 million views. 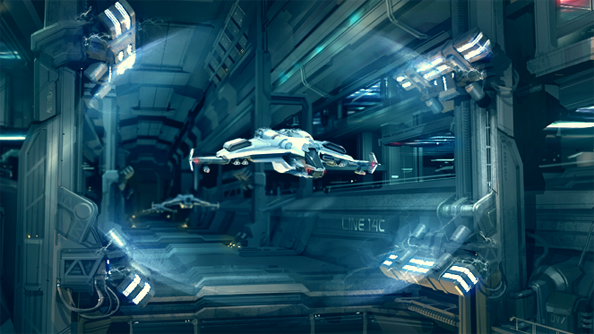 “People definitely like to slice asteroids with a laser beam,” laughs Schade. “So that needs to be in there.”

There are plans for more targets to blast apart – parts of stations and capital ships in particular – but Rockfish are wary of pushing Everspace’s hardware demands through the roof.

“That’s something that we have learned from mobile,” explains Schade. “We need to make sure the game is fun even on lower hardware specs.”

The asteroid-splitting came about through Rockfish’s experiments with PhysX in Unreal 4 – the engine which has allowed the studio to do with 12 staff a lot of what they did with 80 at Fishlabs.

“It became an uphill battle to compete with middleware providers who have something like 100 engineers,” says Schade. “Our guys can do things within days that would have taken us weeks if not months with our own tech before.” 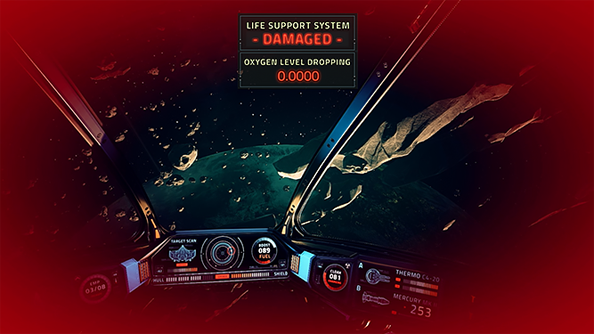 The team have stayed away from the expensive photorealism of Eve and Star Citizen – but wound up with a broader-brushed style that’s still competitively lovely. Everspace’s environments are defined by their contrasts – vivid blues giving way to bright oranges.

Now in the mid phase of a Kickstarter campaign and well on the way to their goal, Rockfish are tentatively relieved.

“It’s unbelievable,” says Schade. “You’re working so hard for something for such a long time, and you don’t know how it’s going to be received. You don’t know until you know – but so far it’s been received really well.”

It’s not just Rockfish’s new backers who are enthused about this non-linear space slice-’em-up.

Schade confides: “We have to send our guys home late at night because they are so excited.”

Everspace is estimated for release in October 2016. Unreal Engine 4 development is now free.

In this sponsored series, we’re looking at how game developers are taking advantage of Unreal Engine 4 to create a new generation of PC games. With thanks to Epic Games and Rockfish Games.