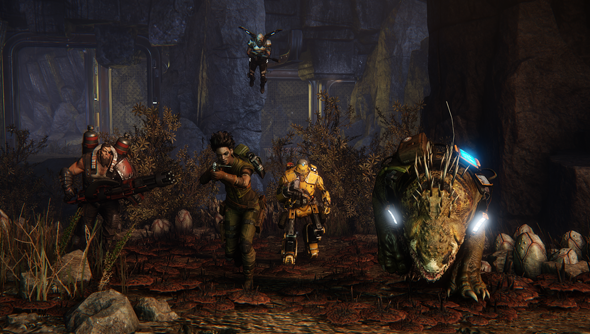 2K were in a call with their investors last night, so we picked up the other phone and tried not to breathe too loudly. What we heard made us shout “muuu-uuuum!” and slam down the receiver: Turtle Rock’s Evolve has been pushed back “a few months”, from the Autumn till February next year.

“We’re really excited about the title. Coming out of E3, where it won best of show, it felt like the right thing to do to make absolutely sure this title could be its very best.”

The real victims in the Evolve delay are the faces of the developers – https://t.co/Yrd2LhiM3Y

It’s worth noting that this isn’t a “meaningful” delay for 2K, because Evolve will still come out within its intended fiscal year. This is the sort of thing that’s important to you if you take calls from Strauss Zelnick.

Once the earnings call was over, 2K released a statement to reaffirm their faith in Turtle Rock.

“2K and Turtle Rock Studios are extending the development of Evolve by a few months to allow enough time to fully realize the vision for Evolve and meet our collective standards of creative excellence,” wrote the publishers. “We are now certain we are headed in the right direction with the game and we are confident in delivering a genre-defining product when Evolve launches.”

Aces. Essentially, Turtle Rock’s monster is taking a few more minutes to sneak about the map and bulk up on creeps before it launches its offensive. That okay with you?