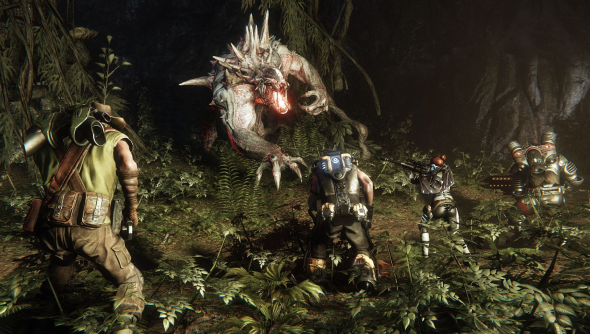 Games, like Call of Duty, which sell maps as DLC, fragment their playerbase into those that can afford the new maps and those that can’t. This means there are fewer players in the pool for matchmaking and no one has a good time.

Evolve’s developers don’t want to fragment their community with their DLC, instead they’re giving away new maps for free. You can even play alongside the new hunters and monsters the studio release, you just can’t play as them.

“We’re looking at maps, monsters, and hunters,” Turtle Rock Studios’ creative director Phil Robb said to IGN, laying out the studio’s plans for DLC. “One of the things we’ve been really careful to stress is that we approached our DLC plans as consumers. First thing we said was we can’t break the community up, so, all of our maps will be free. We never want anyone booted off of our server because they haven’t bought something. That sucks.”

While Turtle Rock will be selling hunters and monsters as DLC, players who have bought them can play as those characters alongside players who haven’t. “If your buddy wants to buy the DLC that’s cool and the game will be enhanced through his purchase,” Robb explains. “You won’t be able to play as those characters but you’ll be able to play with him.

“We don’t want people to feel they have to buy anything in order to enjoy the game.”