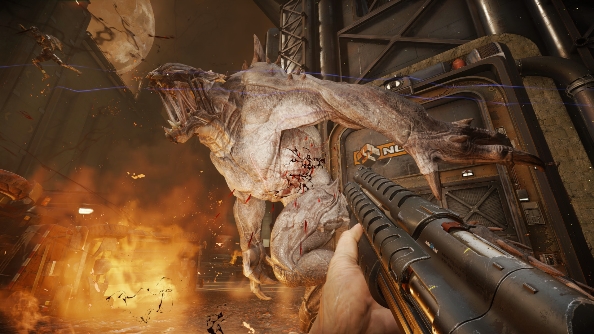 Evolve’s “Stage 2” err…evolution appears to have given the monster-hunting multiplayer a second lease on life after going free-to-play this week as player numbers sky-rocket.

Will Evolve now join the hallowed ranks of the best free games on Steam?

Granted, leaping from 157 players before Thursday’s re-launch to a 32,000 24-hour peak isn’t exactly challenging Dota or CS:GO for supremacy (both currently sitting at 770,000 and 391,000 respectively on Steam Charts). But Turtle Rock Studio’s decision to switch to a new model just over a year after release appears to be stoking renewed interest.

The game itself has been overhauled, too, with gameplay and balance changes along with a less insulting microtransaction model for players who pick up the asymmetrical multiplayer.

Community co-ordinator at Turtle Rock, Cory Lanier, says the work is not yet done with a patch coming next week as the team hopes to retain a higher number of players than Evolve’s first, marred release last year.

“We’ve done a lot of gameplay related changes for Stage 2 and that is a big focus for us going forward,” Lanier wrote ina Reddit threadon the game’s return. “We’ve got a lot of feedback on just general balance stuff that myself and the rest of the balance team are starting to work on for our first update that’ll be hitting next week.”

Evolve’s release last February was received by mixed reviews, and many citing the aggressive marketing towards microtransactions that altered gameplay as an off-putting aspect of an already paid-for game.

“We’ve got a lot more work to do but it’s great to see so many people coming back and giving things a shot,” Lanier said. “Hopefully we can keep people around and happy.”