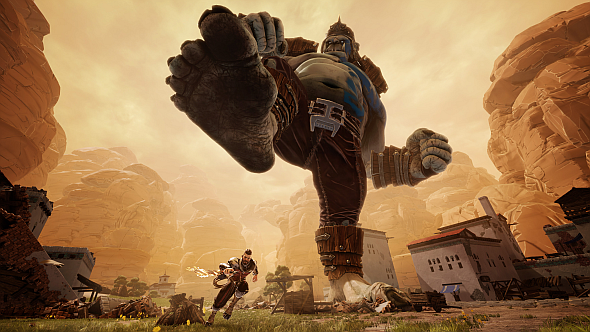 Ever played a hack-and-slash RPG and thought, “this is fine, but what I really want to do is use a whip to climb a giant monster and cut its head off?”

For more epic quests and apocalyptic scenarios, check out the best RPGs on PC.

Extinction is a fantasy action game in which you, as one of the world’s last Sentinels, are the only person capable of fending off an invasion by the Ravenii, a monstrous race bent on the total annihilation of humanity (extinction, in other words).

There’s a whiff of God of War in the trailer as protagonist Avil scales a 150-foot tall ogre in defence of a city, and developers Iron Galaxy say that’s typical of the challenges you’ll face. Here’s a rundown of the game’s key features:

“Extinction is absolutely relentless,” says Kraig Kujawa, game director at Iron Galaxy. “We’re really happy with the fast, fluid feel of the game and we’re looking forward to showing it behind closed doors at E3.”

Iron Galaxy are a US studio mainly known for ports and technical consulting, but they have made a few small games of their own; if you enjoyed Divekick or Videoball, you’ve enjoyed their previous work. Maximum Games, who helped bring us Troll and I and partnered with Focus Home Interactive on The Technomancer and Farming Simulator 17, are on publishing duties.

Extinction is slated for release in the first quarter of next year. We’ll have more after E3. In the meantime, feel free to follow the game’s Twitter.