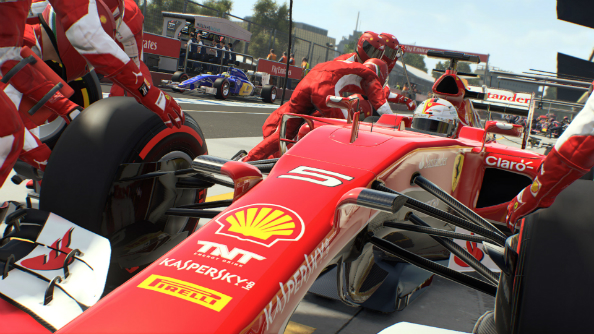 This weekend the 2016 Formula One world championship begins again. Lewis Hamilton will be hoping for another drama-free season in his absurdly dominant Mercedes, while the rest of the world desperately hopes for something – anything – to alter the mirthless status quo of the sport and inject even the smallest morsel of interest back into its lifeless silver and turquoise cadaver.

It’s easy, Codemasters: just do exactly as instructed below and you’ll end up with one of the best racing games on PC. Ready… steady… go!

But while we all say our private little prayers ahead of round one in Melbourne, dreaming of a better sport, there’s also the matter of F1 2016: the videogame to consider. Last year’s title saw Codemasters hit on a handling model that represented a high tide mark for the series, but with so many series mainstays removed from the game, and the resultant experience shipped in such a barebones state, it hardly felt like a victory.

Consider this the ultimate F1 2016 wish list, then. The additions and changes that would turn what’s always frustratingly close to the F1 game you want to play into the real deal, a masterpiece up there with Geoff Crammond’s best works. They won’t all happen, of course, but that won’t stop us from talking about them, will it?

1 – The return of career mode 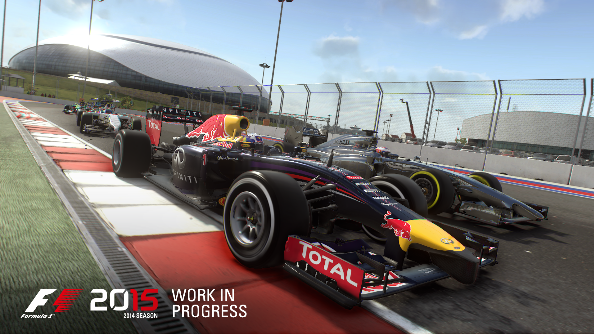 Among several subtractions from the series formula in F1 2015, the wholesale removal of career mode stung the most. It was the core tenet of the entire franchise when Codemasters first took control of the Formula One license. Theirs wasn’t to be another game that pretended to broadcast TV coverage of the race, but rather a game that put you within the helmet of the driver; a radical departure in presentation style at the time.

“Be the driver, live the life” was the tagline for F1 2010, a game that featured press conferences and interviews with dialogue trees, and offered a rags-to-riches narrative in which you take a drive with HRT, Lotus or Marussia and work your way up to the top teams, challenging for championships.

While subsequent games never really did expand on that original vision in a meaningful way (pledging your allegiance to a top team via the young driver program was probably the most significant addition), it remained a major selling point. So when F1 2015 turned up offering only the option to play as one of the sport’s real drivers in a season-long campaign, it was hard to shake the feeling that the game you were playing had time-travelled from 2002, when ‘being’ Olivier Panis for a season passed for the ‘main’ gameplay mode.

F1 2016 needs not simply to reinstate career mode as it was, but expand on it. More interview opportunities, including podium chats, more victory and retirement celebrations, and more dialogue with the team. Hearing the different voice of the team boss or engine supplier congratulating you on winning a race or championship would make a huge impact.

2 – Better custom helmets – and an editor

It seems a minor point at first to say that the custom helmets have been sub-par in the F1 series (before they were removed entirely in F1 2015), but if you’re pretending to be an F1 driver your helmet is a key part of your identity, and thus the immersion of your experience. So the difference between donning this lid from the game’s own choices: 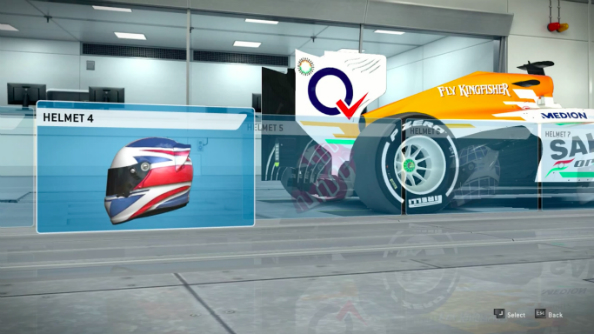 …is significant. The perfunctory designs in F1 2014 and its ancestors made it clear that custom helmets simply weren’t a point of priority to the developers. But the enduring popularity of high quality helmet mods (the pictured helmet pack has been downloaded 16,000 times to date) suggests it is a point of priority to gamers.

The very fact such mods exist negates the importance of Codemasters putting in the graft at their end to an extent, but an in-game helmet designer would take this aspect of the experience to the next level, allowing you to create something bespoke for your imaginary racer self.

3 – The return of classic cars and tracks 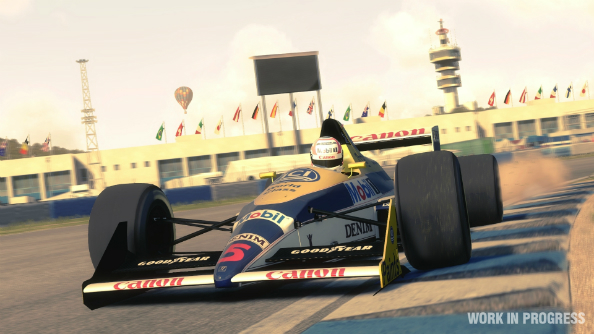 That’s right, another ‘return of’ entry. And rightly so: F1 2013’s classic cars handled wonderfully, captured the spirit of bygone eras, and signalled a new direction for the series that seemed to give it momentum. There were a few too many cars and tracks to make a truly satisfying experience – a recreated race using the full grid of classic cars, say – but it was something to build on.

Then, abruptly, classic content disappeared again the very next game. What F1 2016 needs to do is build on that handful of cars and tracks, and deliver enough content that the player can do something meaningful with it, beyond picking a car and going for a spin, or completing 5-lap challenges against diminished grids.

There are two possibilities: one, to acquire more licenses from bygone seasons and painstakingly recreate entire grids from the naughties, nineties, and beyond. It’s a big ask of a studio whom you always feel are being stretched to the limits of their resources at the best of times, but this is a wish list. No one said the wishes had to be feasible.

Two: make use of the previous five years of car, driver, and track licenses Codemasters already own. It would be a monumental stretch to call the 2010 Formula One championship a ‘classic’ in the traditional sense, but the content has its uses. EA Sports pulled something similar with F1 Challenge ’99-02 – nearing the end of their F1 license, they pooled together their acquired assets and turned them into a sort of four-year career mode.

This is a two birds, one stone scenario for Codemasters, then – by re-using the 2009-2015 assets they already worked so hard to create, they make a career mode with real progression, and tick the classic car box in the process. Imagine it: starting for a bottom tier team in 2009, you’ll work your way up through the ranks, capitalising on team performance changes and driver roster shakeups. 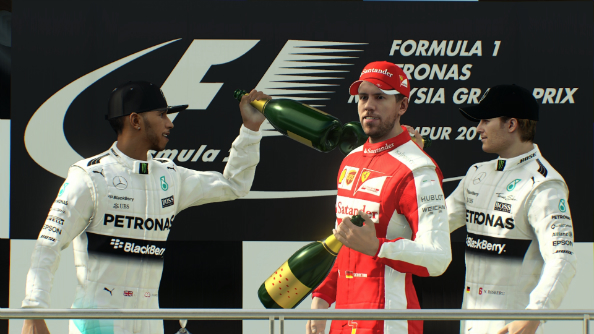 Remember GRID’s surprisingly in-depth management aspect? Picking your sponsors, scouting drivers and issuing team orders over the radio? Now, where else could that be applied that would make sense in Codemaster’s current portfolio? Where, indeed…

In reality, the fact that the F1 series hasn’t seen management elements introduced tells us a lot about the complicated legalities of the Formula One license. Which lawyer would sign off on a videogame that let gamers swap around their major sponsors at will, and would thus proliferate screenshots of Ferraris sponsored by Johnnie Walker and running Honda engines?

Still, there’s some room for manouevre here. The sponsors don’t have to be real (the modders will see to all that later), because the promise of a team management mode is more about fleshing out that F1 power fantasy, having the ultimate say as driver and boss of the world’s best team. 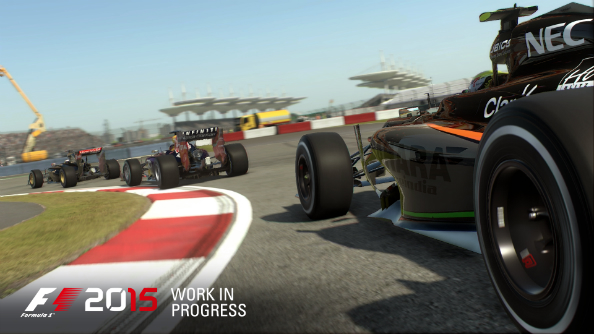 This is one of the wish list items that comes up every year in forums, is occasionally and partly addressed in the game, and then forgotten about in the subsequent title. Formation laps shouldn’t be mandatory, of course. That way madness lies. But as an optional addition it really helps to build race-day tension.

As for safety cars, they’re emblematic of the unpredictability of the sport, signifiers of an opportunity for a plucky lower-tier team to get ahead by employing a perfect strategy while the big boys are caught napping. Who wouldn’t want to see that element of Formula One recreated in detail for the accompanying videogame They’ve appeared with various degrees of success as far back as F1 2012, but they’ve often brought odd glitches, strategy issues and AI bugs with them. This year’s safety cars need to work – that’s all. 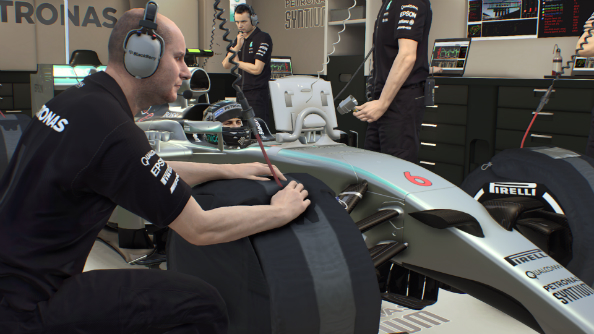 It’s the most nebulous period in the sport’s annual routine – a time for media outlets to publish “Who’s ahead after Barcelona testing?” articles bereft of any clear answers, cryptic interviews with drivers and team bosses who allude to sandbagging, and for fans to once again pretend they’re experts in telemetry data, fuel loads and tyre wear.

However puzzling, it’s a crucial part of the season, and it’d be great to see it represented in the game. There’s already a mid-season testing programme in Codemaster’s F1 series which melds arcade-style hotlap challenges with a simple upgrade tree, so the foundation for a couple of days banging in the purple sectors for the good of your machinery is already set. All that’s required are some establishing cut-scenes. 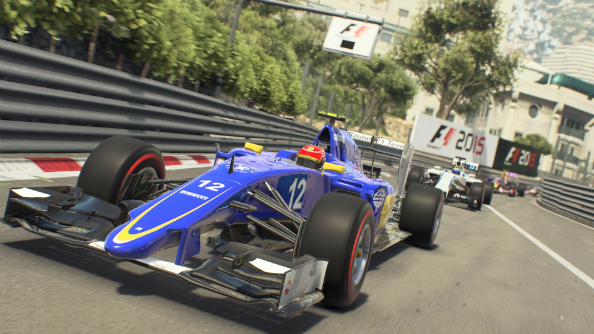 This entry might as well read “make it run at a flawless 60 fps at 4K on a 3DFX Voodoo 2” as far as Codemaster’s legal team are concerned. Motorsport licenses aren’t easy things to come by, so it’s admittedly a big ask to include additional formulas.

Ironically though, you only have to look as far as Milestone’s MotoGP games, which borrow liberally from the F1 series, to find that it can be done. Career mode in MotoGP 15 means starting out as a wildcard rider for a Moto3 team, and working through Moto2 until finally graduating to the big leagues. It’s a fantastic experience, with each category handling differently and building in its sense of speed until the MotoGP bikes arrive to scare you witless.

So if Milestone can do it with MotoGP, is it really pure fantasy to imagine the Formula One license holder doing it too?

What’s top of your F1 2016 wish list? Which features did we miss? Let us know in the comments below.