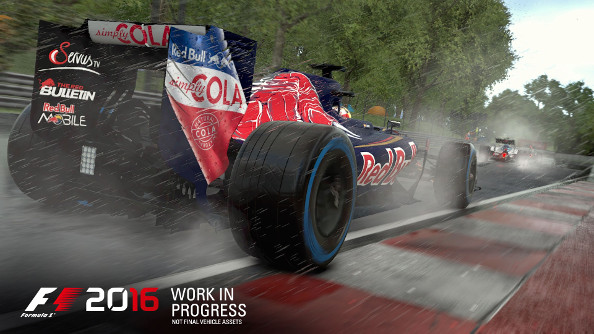 We’re entering E3 announcement season and that means sports games. Racing is the first to start, with the reveal of F1 2016 coming today. This year’s official adaptation of the world’s most popular form of motor racing brings with it a singificant single-player upgrade, letting you string together 10 seasons of play into one massive career mode. It also sees system changes with the reintroduction of the safety car and virtual safety car, as well as one new track based on the street circuit in Baku, Azerbaijan.

Lee Mather, Principal Games Designer at developers Codemasters, calls it a “massive step forward for the franchise” and promises that the career mode “sits at the heart of the game.” It has you creating an avatar and driver number to begin with, before letting you choose which team to race for. Each expects different things from you – some just want you to cross the finish line in the majority of races, while the likes of Mclaren and Ferrari will be expecting championships.

“Beyond improving upon the fastest and most thrilling on-track racing experience in gaming,” continues Mather, “F1 2016 uniquely offers the drama and vehicle development that goes on behind the scenes. A rich car upgrade system is fully integrated into a new and deep practice development programme which mirrors the tests carried out by the teams in real life.”

Practice will be key to ensuring you don’t draw out the newly reintroduced safety car, seen below in all its glory. 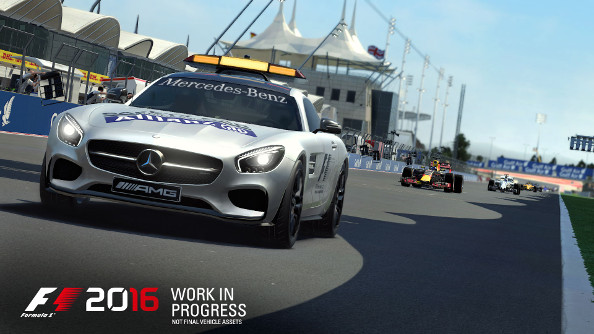 As part of these off-track additions, there’s new hub areas where players interact with agents and team engineers, improving their car and managing their career. Naturally you can choose to move between teams as you improve and impress, or stick with your early choices to get Sauber that cup they truly deserve.

Lastly, F1 2016 adds the new team and track that have come to the real-world thing this year, with Azerbaijan’s European Grand Prix in Baku, as well as the Haas F1 Team. Codemasters say the game will be out this summer on Steam, and they’ll have more details soon.