Codemasters has been diligently chipping away at the gap between its licensed F1 series and the real sport for a decade now, and this year the sport’s response is a courteous: “No, after you.” So it is that we play F1 2020 before a single tire has been flatspotted in the 2020 season, before a single tantrum has been captured over race radio. Before Grosjean’s first DNF, even.

So I can’t tell you how accurate this year’s game is. What I can tell you is that Codemasters obviously fancy Vettel for the title this year. And that it’s the most demanding, the most complete, and the most compelling entry in a decade-long series.

This year’s big addition is the ability to start career mode in a dual role as a team boss and driver. If that doesn’t sound like your thing you can always start with a full F2 season, a six-race taster, or an even briefer prelude, but you’d be missing out on the focal point of the game.

Codemasters veterans will remember a similar management mode in Race Driver: GRID, in which liveries were selected and tweaked, drivers hired and fired, and sponsors proudly slapped on the side of your fleet of cars. This is all present in F1 2020 too, although sponsors are sadly but understandably fictional (I give it three weeks until the real-life sponsor mod) and initial livery designs are oddly limited. 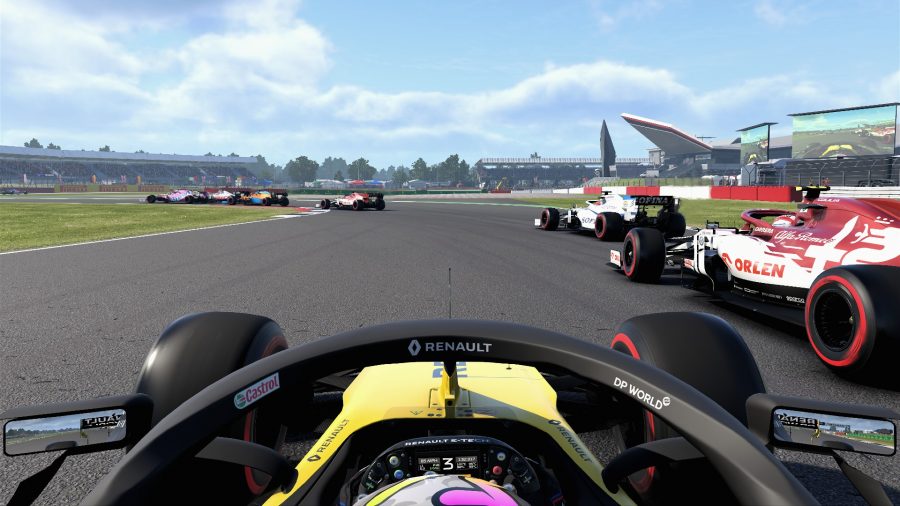 Once you’ve given a colour scheme to Bwoah-n GP (or your own much less funny team name), signed an engine supplier from F1’s big four, and brought a number two driver aboard, running the team feels like a natural extension of the RPG-style R&D upgrade tree that’s been creeping into career mode for the last few years. Instead of just pumping R&D points into a new front wing design, you’re pumping money and acclaim into the aero department, who pump R&D points into a new front wing design. This is all conveyed through nice little 3D scenes at wind tunnels and glitzy offices in your HQ.

More like this: Check out the best racing games on PC

Selecting Honda as my engine supplier and bringing in my second driver from a choice of real-world junior prospects (bonus points for that, Codies), we absolutely stank the place out for the first half of the season. Seriously. I wished I had Williams’ pace. Playing at your usual difficulty (I’m an 89 man myself) you will probably lose touch with the pack after three laps and complete a mirthless procession of uneventful racing thereafter.

But in a way that’s the point. You want it to be a rags to riches tale, after all. Just be prepared for the riches to take even longer to get than in previous years, when you might’ve taken McLaren to the front of the grid through diligent upgrade point-harvesting in practice sessions. 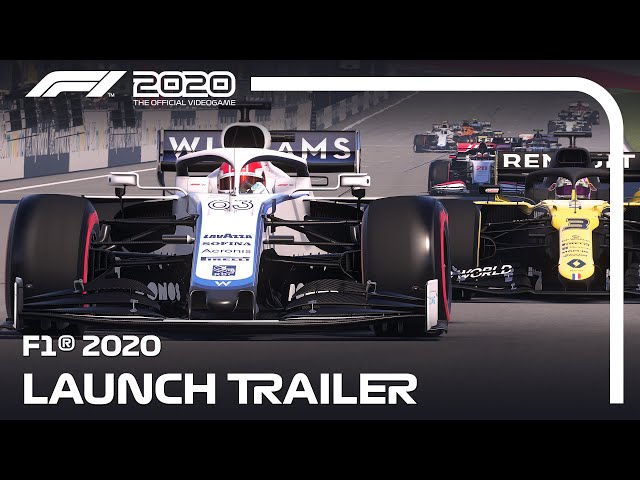 A word on that, actually. It’s more important than ever to do every activity in every practice session to harvest those points, and this has long felt like a chore. Something needs to change in this aspect, if only a refresh of the specific activities.

Certain drivers show more aggressive tendencies: Magnussen simply did not give me enough space to overtake him. Legit

Running a team adds a new level of long-term interest to a game that was already capable of hoovering up your hours with its career mode, adding in new wrinkles like staff morale and a calendar to fill with PR-boosting activities. Casting an eye over the driver market – they all have stats now, which caused quite a consternation among the real-life paddock – is genuinely exciting, and making a play for a big name (obviously Danny Ric) after years of saving the pennies in other departments feels amazing. And while I’d like to see a bit more on team-mate relations next year, it’s a great foundation.

The exception to this is the customisation options, which feel conspicuously light when you’re starting out, for a game about designing and running your own team. Especially considering there were actually many more helmet designs and car liveries (though restricted to multiplayer) last year right from the off. This year, livery, race suit, glove, and helmet designs are gated behind a new Podium Pass system. Think Fortnite’s season pass, basically – you earn XP for spending time in any mode, and that XP unlocks different tiers of items. There’s another layer still of rags to riches, then, although I’m not delighted about that at present, as I race around in an embarrassingly basic livery design. 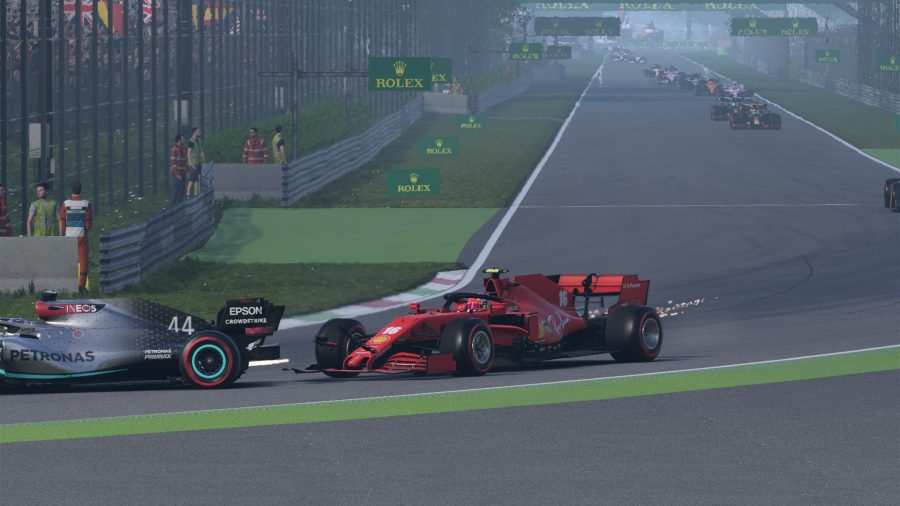 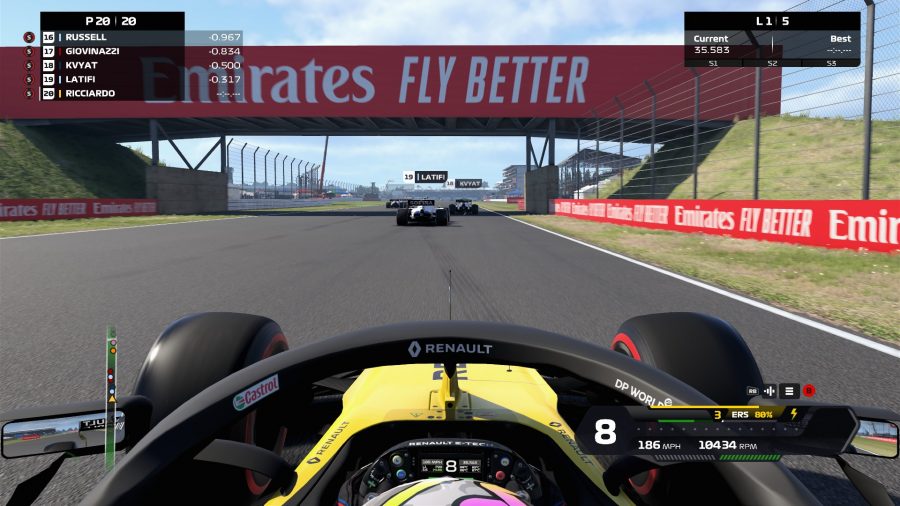 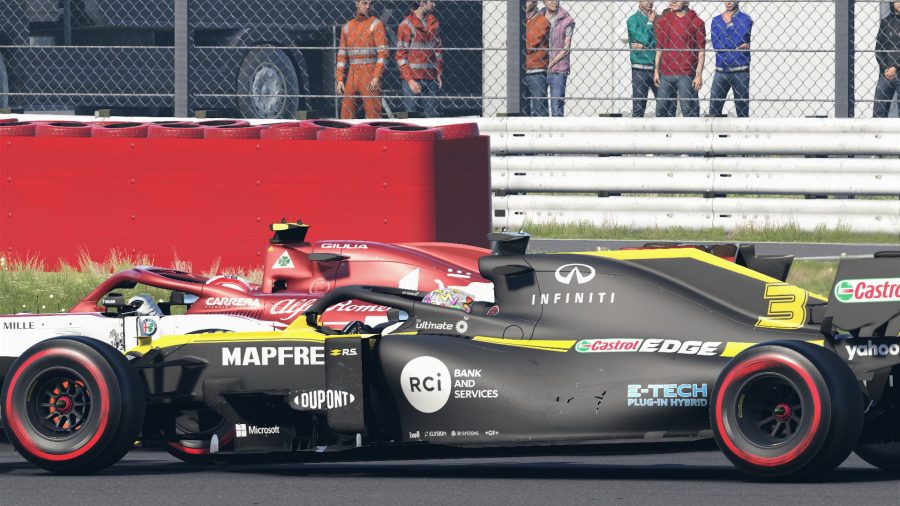 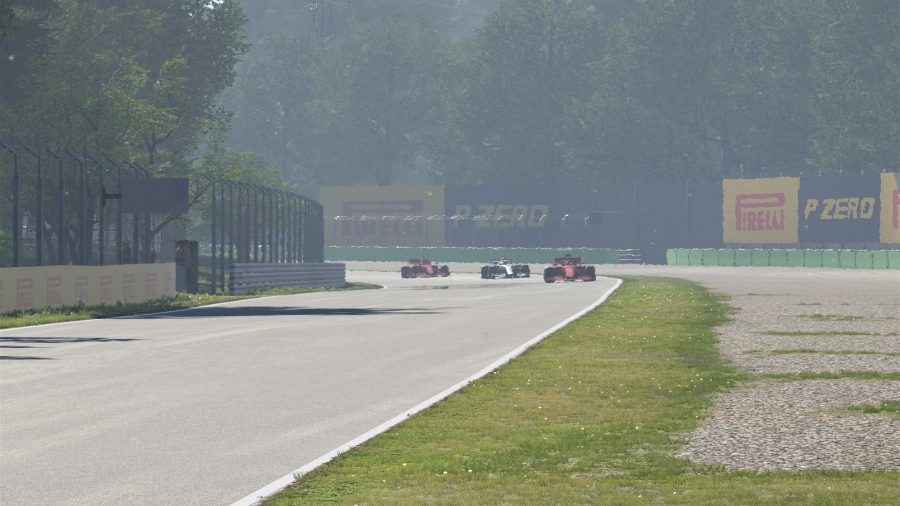 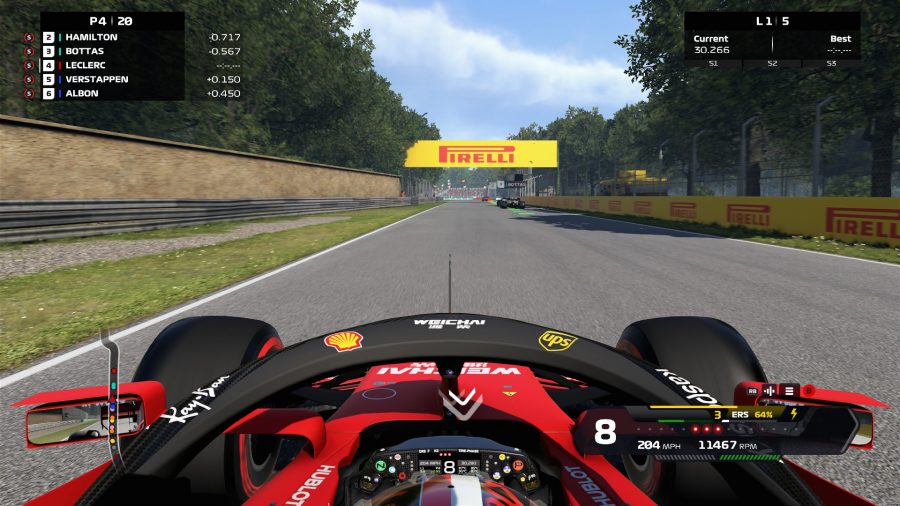 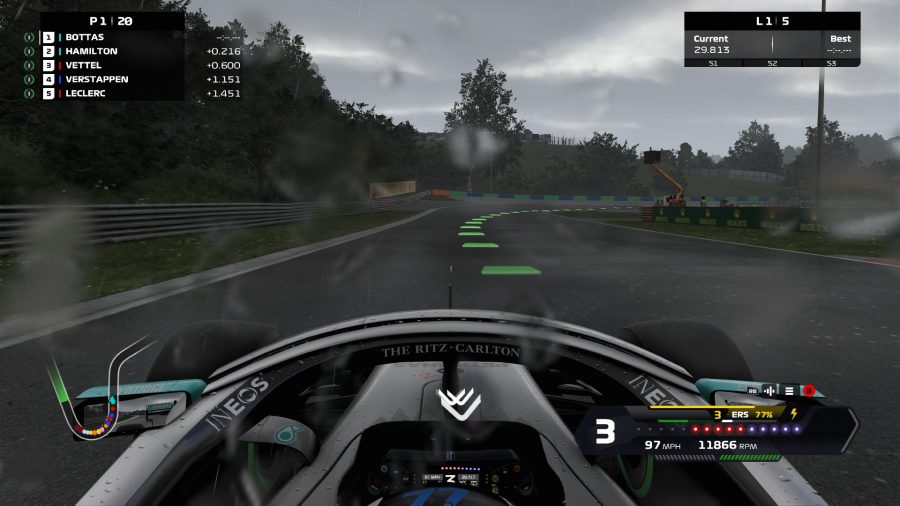 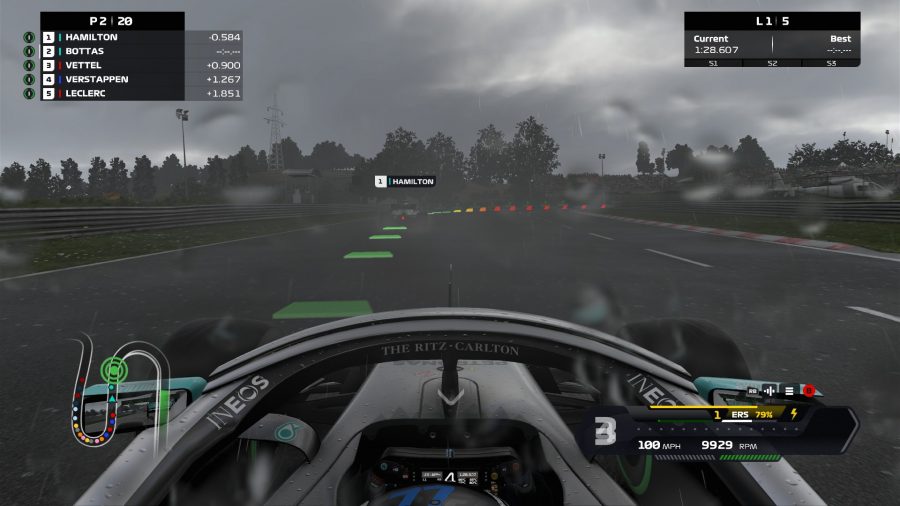 Need I even mention that the racing itself is great? I probably should. This series has been in danger of showing up the real thing for years, and with a noticeable improvement to how drivers go about race starts, that trend continues. Gone are the days of picking up five to ten effortless places on the first lap while everyone else sticks rigidly to a racing line as if driving on buttered ice. Now drivers use the full width of the track in the run down to turn one, and it’s absolutely bloody terrifying to be in the middle of.

I’ve noticed certain drivers consistently showing more aggressive tendencies too, which is fantastic: Ricciardo made a few thrilling lunges in Bahrain and China to get past me and my midfield company, and Kevin Magnussen simply did not give me enough space on the track at any point when I tried to overtake him. Legit.

They’re all still a little too timid at overtaking unless you make a mistake, though. This was worse in previous games when a big conga line would amass behind you if you were off the pace, separated by 0.3s, and absolutely rinse you in the pit stops. It’s better now, but they’re still notably hesitant to actually overtake under braking. 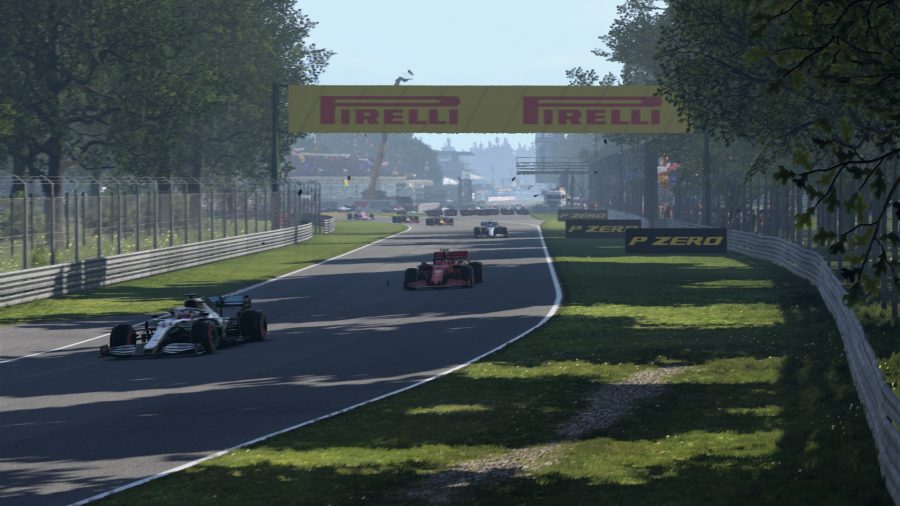 The unsung heroes in this series are the talented folks who program force feedback response, and thanks to an even more tactile sensation from everything you do in the cockpit, the car feels weightier in your hands this year, whether through a pad or wheel. I’m not sure the cars are actually better to drive than in previous years, but that comes down to the sport, not the videogame.

At a time when every other annualised sports series is showing chronic fatigue, F1 2020 is an exemplary release

Online endeavours in their various guises will determine what kind of game F1 2020 is in the long-term, though. I should know – I’m currently the fastest driver in the world around Bahrain and second at Spa. And while this almost certainly is no longer true by the time you’re reading it, and was only ever true because there were only seven times on the leaderboards for these tracks when I did the time trials, I’m insisting my editor keeps it in. 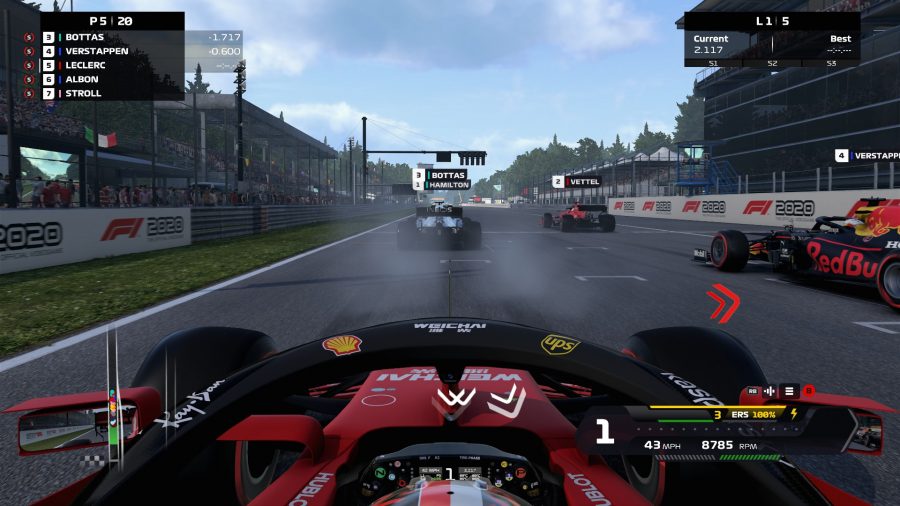 Hotlapping is the sim racer’s bread and butter, and this year it’s an especially punishing endeavour. Corner-cutting penalties await at the slightest miscalculation, more so than ever, and I found it wasn’t unusual to go ten laps on the trot without registering even one accepted time. The extreme, two-wheels-off-the-track-in-the-braking-zone lines that you find Brendon Leigh, Enzo Bonito et al taking are even harder to hit this year, and in some cases simply can’t be done without incurring a penalty.

Online races haven’t been touched structurally since last year, which means the fan-lamented co-op career has yet to return and instead ranked and unranked quick races complement the longform online leagues. And as before, there’s a marked difference in the kind of competitor you’re matched with in five-lap sprint races (will run you off the track at any opportunity) and 25% distance races (will drive about 1.5s quicker per lap than you and thus don’t need to make contact).

The visual customisation means more this year for being tied to your career mode team – last year you just picked a livery that looked cool, but now you’re taking the team you built and representing them against the online world. 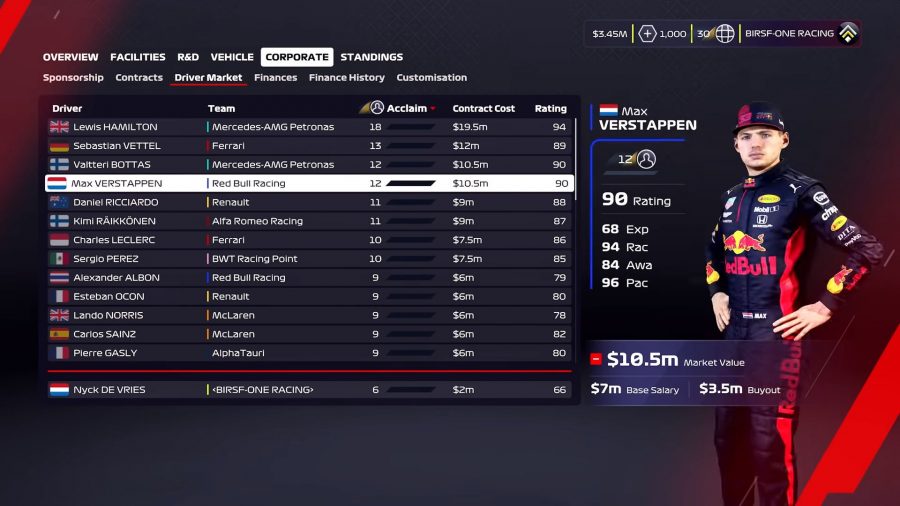 Online stewarding hasn’t been fixed. I’m not sure it ever will be, short of hiring a team of actual stewards to sit and watch every race, 24 hours a day, but the fact remains that you’re often given penalties when other drivers crash into you. Race enough clean events and eventually your safety rating will ensure you’re matchmade against similarly safe drivers, but as before that sometimes means letting everyone else go and completing five clean laps in last place.

Prefer the business side? See the best management games on PC

Even so, online races still benefit from two new features. The first is a simplified one-tap ERS deployment method which does away with the constant cycling between deployment levels from F1 2019 which became the multiplayer meta, and rather more workaday is the inclusion of a virtual rearview mirror just across your halo. Those who care about not making contact will put this to good use, I’m sure. In bronze ranked five-lap races… Well, we’ll see. Maybe the odd front wing will survive here and there.

At a time when every other annualised sports series I can think of is showing signs of chronic fatigue, F1 2020 is an exemplary release that demonstrates how to build on last year’s additions, bring new challenges, and somehow simulate a sport that at the time of writing hasn’t even happened yet this year. In these old bones of mine the Fortnite-style Podium Pass feature doesn’t feel like the best way to add greater depth of customisation to driver-manager mode, but you’re probably too busy flossing by now to care about that.