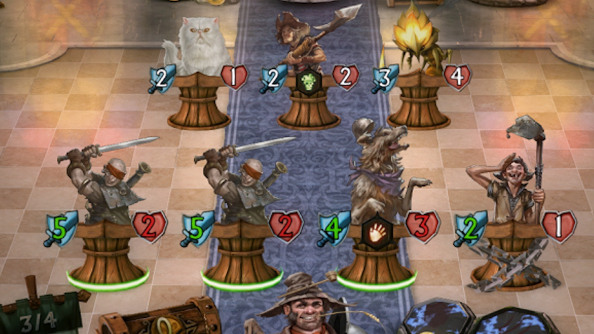 Update: The Kickstarter is now live with a very long breakdown of everything the game has to offer and the massive number of possible reward tiers.

If you’ve been dying to pledge for a Fable card game the time has now arrived. Fable Fortune is now on Kickstarter, looking for £250,000 to fund its F2P PvP CCG, with a bit of co-op thrown in. This also brings with it a new trailer in the form of Kickstarter video, along with a deeper explanation of the project and the people behind it.

More into your Hearthstone? Here’s the best decks for the new season.

Mike West and Craig Oman introduce the game and show off some cards in the Kickstarter video:

It’s looking remarkably finished, with six of eight heroes done and a full game engine in place. More finished heroes are stretch goals, as is an Xbox One version of the game, though I expect they’ll be happy to just make the £250k they’re after. What they’ve built on top of a basic Hearthstone structure is exciting, but much the same as those that find their FPS or MOBA often stick to it, whether the crowd will be willing to jump ship to Fable from Hearthstone or elsewhere remains to be seen.

Get pledging if you’re interested, and do have a read of their massively in-depth description of the game. We’ll update when they do, or if they make it across the finish line.

Original story:Lionhead is gone and Fable dies with it, or so the story went a few weeks ago. While Microsoft were planning on licensing out the franchise, nobody was expecting to see much of it soon. However, a group of ex-Lionhead developers who were working on a card game called Fable Fortune for 18 months have restarted it at a new home, Flaming Fowl Studios. They’re heading to Kickstarter today to raise £250,000 (about $365,000) to keep the game afloat and release a beta before the end of the year, with full release planned in 2017.

According to IGN’s article on the subject, Fortune bares significant similiarities to Hearthstone, using eight heroes as a base off which to build decks of spells and minions to reduce opposing life totals to zero. The team, which consists of Craig Oman, Mike West and Marcus Lynn, have big plans on how to move the genre forward, including 3D art, more customisable cards and a more complex system for balancing going first/second.

It will draw on Fable’s heritage by implementing a mid-match quest system that determines your morality, altering your cards and hero. As for how you’ll play, there’s to be more on offer than 1v1 PvP, with co-op against AI bosses planned for the base version. Much more too, if stretch goals are met, but first the community has to show they want it by opening up their wallets.

They showed off a full match of the game to IGN in the video below.

It’s more complete than your average Kickstarter, having been in full development since 2014. Hundreds of thousands of pounds is quite a tall ask in 2016’s crowdfunding world, especially for a game in such a packed genre – we’ll see how they do come 3pm BST / 10am ET / 7am PT, and we’ll update this post once it’s live.