When you were conceived, millions of sperm struggled desperately to be first to the egg. Jostling and scrambling for a chance at fertilisation, they fought past a series of obstacles adapted to thin the herd. Millions became hundreds, became tens, became one, became you. A jelly bean with boneless limbs and two beady eyes, rolling down a sticky yellow vinyl ramp.

The premise of Fall Guys isn’t too far from the battle royale game modus operandi – a lobby of hopeful legumes fall one by one until a victor is crowned. But rather than fighting for your life in the war-torn battlefields of PUBG or Apex Legends, you toddle precariously through a series of candy-coated mini-games, butting heads and making grabby hands at anything standing in your way.

The mini-games themselves are equal parts thrilling and comically frustrating – the obstacles are all designed to screw you over, but it’s easier to recover from flinging your portly form at a fake door in Door Dash than it is to get over the agonising seconds spent slowly slipping into oblivion in See Saw. Not to mention the impossible mission that is keeping hold of the fluffy tail protruding from your behind for an entire round of Tail Tag. 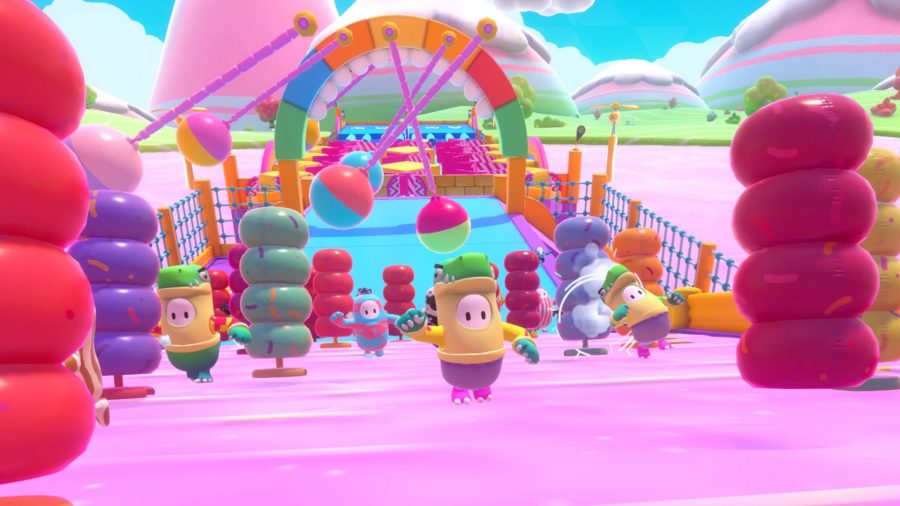 Despite these moments of calamity, the gameplay is as fun as it looks and sounds. Its polished plastic sheen, cheerful soundtrack and satisfying sound design are the icing on the birthday cake – you and your fellow wobbly cocktail sausages scamper across the playground, emitting gentle pops, coos, and whoops like mild mannered mothers at a bake sale. Even when you slip up and meet a gooey end, you plap into the slime like a deflated balloon.

I could play Fall Guys with my mum, and she’d be in with a solid chance at victory

The controls are relatively simple to master – as you steer your gelatinous tic tac through the arena, you’ll jump, dive, and grab your way to safety. Even if you’ve studied the minutiae of each level for its optimal strategy, there’s a heavy sprinkling of luck when it comes to deciding who progresses – but this chaos helps the game stay accessible and fun to a range of ages and abilities. I could play Fall Guys with my mum, and she’d be in with a solid chance at victory. Any frustration at an unfair tumble into the lava is easily mitigated by clicking the bright shiny button and queuing again.

Of course, as with any game, not everyone plays nicely. Cast your mind back to the heady days of soft play, scampering around a PVC jungle in your socks, fuelled by some ungodly fizzy syrup (rest in peace, Panda Pops). You’re contentedly amusing yourself, building a fort of polyethylene foam triangles, until some grubby little shit punts you straight into the ball pit. 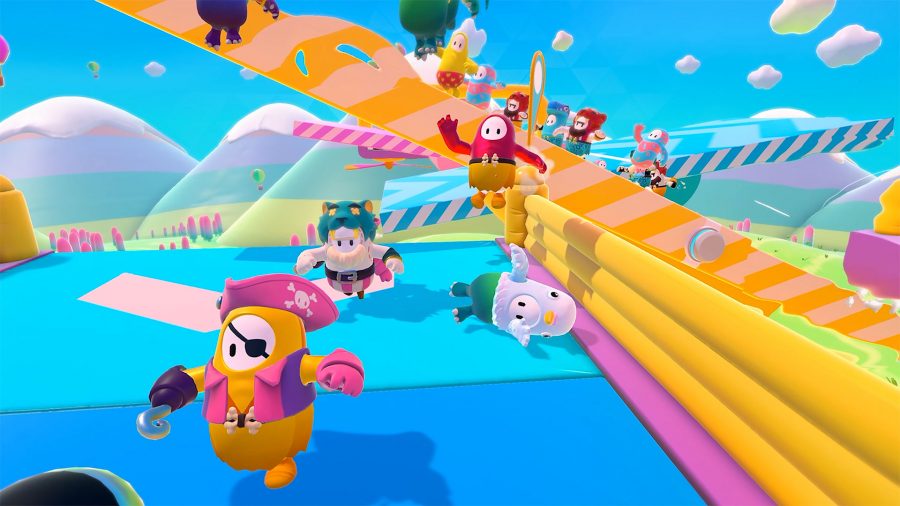 Who would do such a thing? Who would stand sentry at the finish line, arms outstretched to greet you after your hard-fought clamber through the slime, grasp you tight with both arms and then dump you off the side, back into the goop? The fact that this dastardly trolling is a feature of Fall Guys will undoubtedly appeal to some. It’s a bean-eat-bean world out there, and if you’re one of those gleeful sandcastle-kickers, ruining someone else’s game will make your own victory all the sweeter. You monster.

There’s enough variety in the mini-games to keep you entertained for a handful of rounds in the evening with friends, though parties are capped at four – presumably any larger and there’s a risk of unbalancing the team games, but there’s plenty of room for group play to be expanded upon in the future. On that note, as the novelty wears off a little, a steady stream of new content will be necessary for Fall Guys to keep up with its breakneck momentum – it sold two million copies on Steam in one week – though it’s a gem of a party game as is.

Though Fall Guys certainly could be played competitively, if you’re in it for the win, you’ll need a lot of patience and emotional resilience. I can’t imagine wanting to grind for battle pass levels, even if I do get a snazzy hat for my trouble. Much more appealing is embracing the chaos and barrelling around like a flappy-armed inflatable, convincing myself I don’t care when I am somehow flung miles into the air by a rotating arm. It’s fine guys. I wasn’t even trying to win. I’m not mad. It’s fine.

Fall Guys’ ingenious game show royale formula is a recipe for success, and its gameplay is full-fat unadulterated fun.