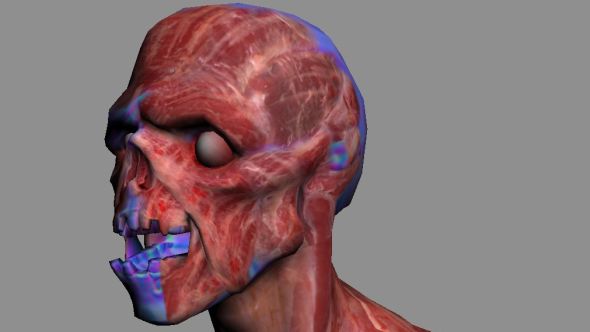 Fallout’s ghouls can be found across the Wasteland. From the Mojave to the Commonwealth, it’s hard to go anywhere in Bethesda’s takes on the franchise without blasting your way through at least a few feral ghouls, but did you ever stop to think about how they were made?

Fallout lore dictates that ghouls are victims of prolonged radiation poisoning that dramatically extends their lifespan. Many ghouls live alongside humans in settlements across the wasteland, but some have gone ‘feral’, often living as part of dangerous packs in ruins scattered throughout the Fallout games.

Closer to home, however, Fallout 3’s feral ghouls were put together using real meat. Jonah Lobe, who worked as an artist on the game (as well as Skyrim and Fallout 4) says he used photos of actual chicken flesh to create the monsters’ skin tone.

Lobe tweeted saying that “to get that icky translucent look, I used photos of real meat (ie packaged chicken). Obviously a photo by itself wouldn’t have done the job, so Lobe had to use modelling tools to shape the photos, “to make it look like real human(ish) flesh.” The pictures Lobe attaches are, to be quite honest, pretty gross, but give an interesting look into what goes into making some central characters.

Remember the Feral Ghouls from #Fallout3 ? To get that icky translucent look, I used photos of real meat (ie packaged chicken) & used the Liquify filter to push them into position, to make it look like real human(ish) muscle. Bon apetit! pic.twitter.com/IgmOIPctuM