As the Fallout 4 DLC cycle comes to an end, now is the ideal time to sit back and assess the package as a whole. Following a spate of articles on the very nature of Fallout 4, culminating in Jordan’s assertion that Fallout 4 is a misunderstood stealth game, I felt it was time to offer an alternate thesis: that Fallout 4 is actually a surprisingly good zombie game.

Even though it doesn’t contain any actual zombies.

For titles that actually do feature the undead, see the best PC zombie games.

The setting of any game in the Fallout universe, particularly since it transitioned to first-person, making the switch from CRPG to immersive action game, has been key to its success. The locales and world-building are of course important, but it is the prevalence of certain types of enemy – along with a few simpatico design choices – that really sets the tone.

In Fallout 3’s Capital Wasteland the Enclave are chief antagonists, but it’s the hordes of rampaging Super Mutants – combined with the game’s distressed green visage and penchant for forcing you to travel down terrifying subway tunnels – that paint the experience as a bleak struggle of humans against monsters, somewhere between Gears of War and Metro: 2033. Fallout: New Vegas on the other hand, which sees the player forever in the middle of warring factions of raiders and tribals in a dust-swept Mojave desert setting (with burnished orange hues replacing the mouldy green tint) has a distinctly Wild West feel about it. 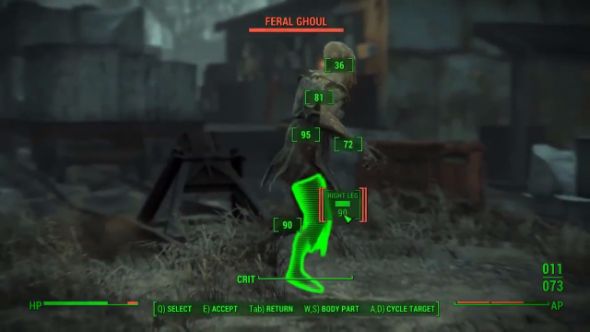 In Fallout 4 however, Bethesda eschewed cheap colour-washing gimmicks and overly-empty environments for that distinctive “lived-in” feel, instantly familiar to fans of The Walking Dead and George A. Romero flicks. Stepping out of that vault for the first time feels like Cillian Murphy’s character stumbling from the hospital in 28 Days Later.

Like any zombie franchise there are human antagonists in Fallout 4, and there are of course far more dangerous enemies – hearing (but being unable to locate) the telltale beep of a Super Mutant Suicider, or getting locked in a creepy abandoned church with an angry Deathclaw both come to mind – but the reason Fallout is actually a great zombie game is that the Commonwealth is completely overrun with Fallout’s very own version of the fast zombie: Feral Ghouls.

Take a moment to stop and think about just how many encounters you’ve had in Fallout 4 involving Feral Ghouls. You stumble across an interesting building, tunnel or bunker? It’s got Feral Ghouls in it. The Minutemen need a location clearing for a new settlement? It’s filled with Ferals. Brotherhood of Steel need you to fetch some technology? The area’s lousy with them. In fact, even the mission that introduces you to the Brotherhood’s recon outpost involves rescuing the recon team from a town swarming with Feral Ghouls, before they send you off retrieving technology from – you guessed it – other Ghoul-infested locales. 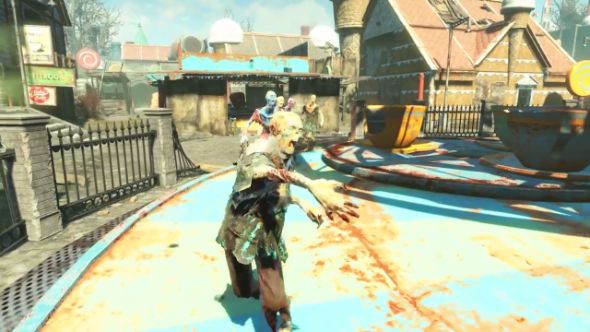 There are definitely a lot of the Fallout-universe zombie analogues to fight, but that in itself does not make Fallout 4 a zombie game. There are plenty of other things to do and ways to pass the time, not to mention a huge variety of nasties to combat that could put the game in any number of genres from straight-up sci-fi to schlocky B-movie. But it is the relentless following of certain zombie mechanics and tropes that makes Fallout 4 a surprisingly good zombie game.

For starters one Feral Ghoul – much like a single zombie – isn’t in itself particularly dangerous (with some notable exceptions, see below) but where there’s one, there’s usually many more. It’s this slow, rising tide of Feral Ghouls lapping around your ankles in Fallout 4 that can really catch you out. Ferals may be slow-witted but it’s advisable to use stealth and take them down quietly, because when they hear a gunshot they’ll all converge on the sound, just like in zombie movies.

Headshots aren’t the only way to take down Fallout 4’s zombie equivalent, but they certainly deal devastating damage. What’s even more satisfying, however, is using the V.A.T.S. system (or even standard gunplay, vastly improved over previous Fallout titles) to exercise perfect crowd control. Blasting the legs off off a herd of Ferals coming towards you can render them less dangerous – though they will still crawl towards you, relentless as their zombie counterparts – buying you vital seconds to escape being swarmed, just like they do on TV. 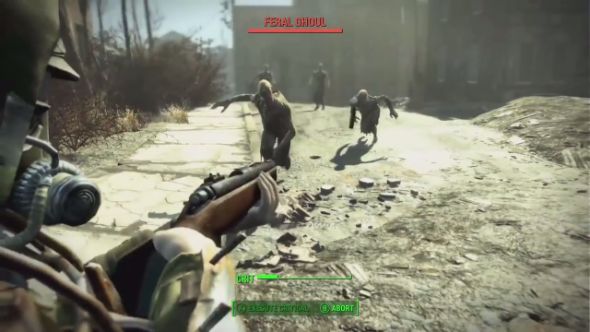 Bethesda have even improved upon their own game mechanics to keep up the fiction of their pseudo-zombie apocalypse. If you enter an area and clear out all the Feral Ghouls it would be a cheap trick to simply have more enemies respawn just to keep the combat going; instead they will crawl in through open windows or out from under ruined cars to keep the threat level elevated. That’s how a solitary Feral Ghoul can cause you problems: by catching you off guard, sneaking up behind you like so many dear, departed characters from The Walking Dead.

Fallout 4’s Feral Ghouls even follow the basic, non-combative behaviour patterns that zombies do in the movies and on TV. They’ll shamble around areas they used to know, with some sort of muscle memory vaguely driving them to act out an absurd diorama of the life they once knew, pottering around a supermarket or lingering at a drive-in movie theatre. When you loot a Feral Ghoul’s corpse you’ll even find they might have been carrying around a shiny trinket of their former life, perhaps a hairbrush or a handful of precious bottle caps.

There’s even a side-quest where you run into someone trying to save a pack of Feral Ghouls, his former colleagues and friends, because he believes they’re “still people” and might one day be cured. If that particular trope isn’t the very definition of zombie story cliché, then I don’t know what is.