Chances are you’re going to be spending a lot of time in Fallout 4’s post apocalyptic rendition of Boston over the coming weeks and months. Like most Bethesda games, Fallout 4 is enormous, almost overwhelmingly so, and despite its familiar mechanics – exploring, looting, etc – there are many new systems to learn about and take advantage of. This is also the hardest game that Bethesda has ever made, so in order to make your way into the irradiated desolation of Massachusetts, read our Commonwealth Survival Guide to get the inside know-how on 23rd century life.

Wanting to spice up your game? Check out the best Fallout 4 mods released so far.

Make the most of crafting 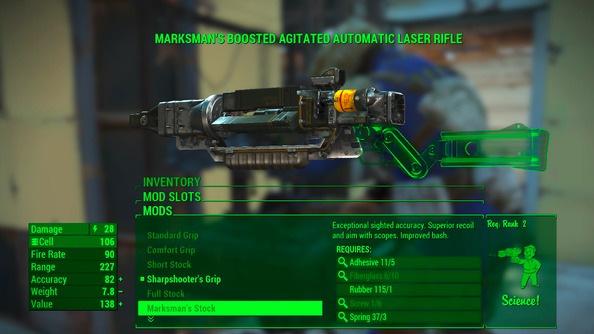 Crafting in previous Fallout games was somewhat half-formed, but in Fallout 4 it’s absolutely everywhere. You can tweak guns to entirely change their makeup, function and general effects, as well as modify armour with unique stats and buffs. It’s an incredibly enriching experience, and gives you a really personal tailoring over the kind of character you want to play, but it’s also confusing. You should always check on the various workbenches that dot the wasteland, including those at your settlements. There, you can look at the individual components you want to craft for your weapons and use the “Tag for Search” function to cleverly highlight the necessary parts you need. This tags the parts you need while looting, so you can quickly grab everything you need while scouring for loot, without having to concentrate too hard or remember every single bit of wood, steel, ceramic and plastic that you may need. 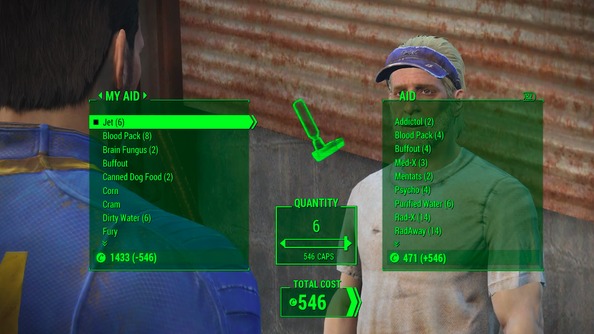 Fallout 4’s currency of Nuka-Cola bottlecaps can be hard to find. You’ll find a lot of them around the wasteland by pilfering through cupboards, desks and cabinets, but rarely do you have spare cash to play around with. You’ll have to spend money on ammo for your weapons, or stimpaks for health, or Radaway to keep that radiation poisoning on the even keel, or any number of other chems to keep you buffed when you’re battling through wasteland scum. In order to get a leg-up early on, I recommend picking up all the pre-war money you can possibly find, which fetches a decent amount selling it to traders, and even takes up no weight in your inventory. Also, try making some Jet chems at a chemistry workstation and flogs that – it doesn’t take much to make and sells for quite a lot. 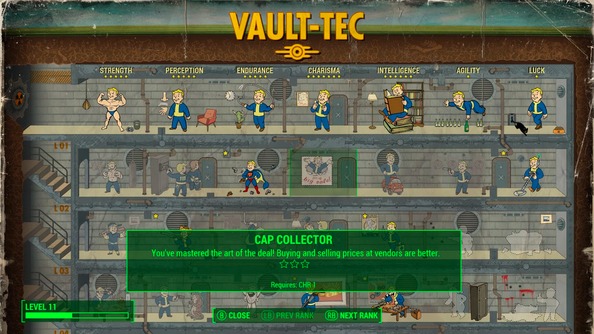 When you do level up, you’ll want to study the quite dense perk chart to give yourself a good idea of where you’re going to take your character next. The perks to start off with depend entirely on what kind of play style you want to go for, but bear in mind that certain locks can’t be picked unless you’ve a high enough Locksmith skill, and the same goes for the Hacker perk for computer terminals. Mods and settlement building options are also tied to perks, so invest in the Science and Local Leader perks for cool options there. Then there’s Gun Nut and Armourer, great for upgrading your gear for combat, as well as Cap Collector, which increases your item sale value and decreases the price at which traders sell stuff. There are a ton of different unique buffs, too – one to watch out for is the Lone Wanderer perk, which grants much larger pockets before you’re encumbered, providing you’re travelling without a companion. It really helps out and reduces having to fiddle with the inventory whenever you’re heading into a deep and lengthy loot crawl. 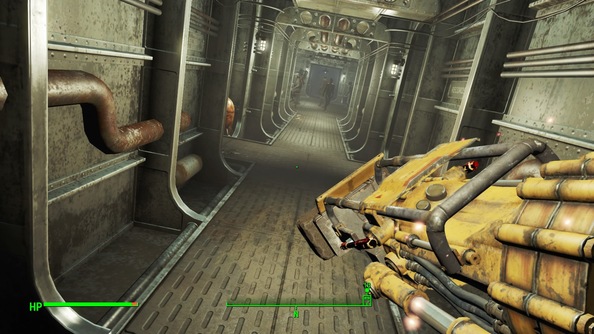 Never forget the power of melee combat in Fallout 4. Not only is it incredibly satisfying to take off a raider’s head with a machete, or to pummel a ghoul’s face in with a super sledge, it’s also the most efficient way of surviving. Fallout 4 is damn tough to start with and – more than any Fallout game before it – resources are slim, ammo is sparse, and amassing a useful amount of bottlecaps takes time. To make sure you’re never completely unarmed in the Commonwealth, select one or maybe two great melee weapons and keep them on you at all times. You’ll never know when a Power-Fist comes in useful against a bastard molerat.

Talk to all your companions 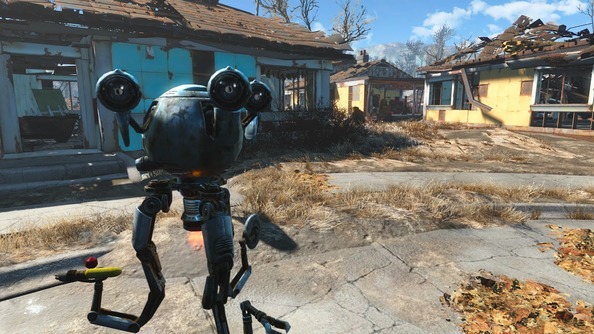 There’s a grand total of 13 companions in Fallout 4 – all with their own personalities, backstories and interesting motives. I strongly recommend you keep an eye out for them, and when you find them you should utilise them. Talk to them regularly, and take them on missions. The more you use them, the more you’ll find out about them, and they’re a fantastic way to learn more about this incredibly rich world. My personal favourite is Codsworth, who’s your pre-war robot that calls me Mister Sammy (he’ll address you by your name, too, if you’re in Bethesda’s predefined list of titles). The much touted Dogmeat is also endearing, and he’ll run into buildings for you to search for treasure. To reveal any of the others would be to spoil some of Fallout 4’s best personalities, though – just keep your eyes peeled.

Suit up for radiation 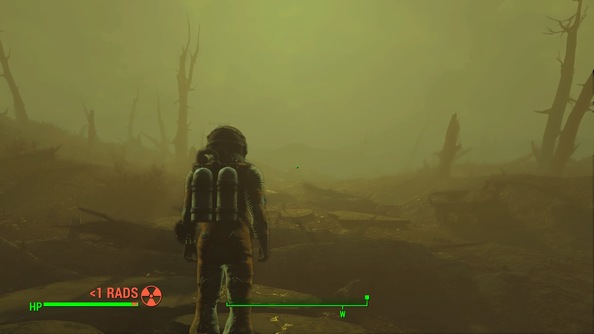 The radiation system in Fallout 4 is streamlined and really smart. Rather than just affecting your S.P.E.C.I.A.L stats in debilitating ways, radiation simply acts as an anti-health bar. When you walk past irradiated sources of water, or tanks of nuclear material, your geiger counter will crackle and a red bar will eat away at the lovely green of your health. It’s a permanent fixture, removed only using Radaway or by seeing a doctor. In order to get access to some of the most irradiated places in the game, you’ll need uber protection, so carry a hazmat suit with you at all times. It doesn’t grant you much protection from bullets or grenades or any of that, but it’ll keep gamma out like no other suit of armour out there (except maybe your power armour, but you can’t carry that). 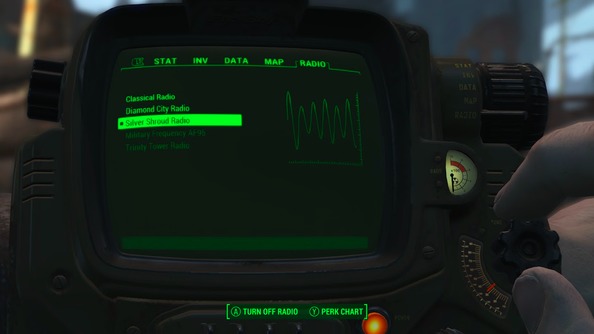 Your PipBoy is an incredibly useful tool. Like in previous Fallout games, it essentially acts as a menu system for everything you need in this world, but its presence as a real item on your wrist makes it feel way cooler than just a set of menus. Your inventory, quest journal, world map and information for all your stats and perks all live in it, but it’s also a brilliant tool for finding quests. Switch to the far-right tab of the PipBoy and you’ll see many of the game’s radio stations. Diamond City is particularly great, with a great range of 50s jives and whatnot, but wandering the wasteland, your Pip will pick up other radio signals out there. They might just be incidental stories, or could lead you to entire quest lines, or people in need. Always check them out when you see the little notifier pop up in the top left of your screen.

Use your power armour properly 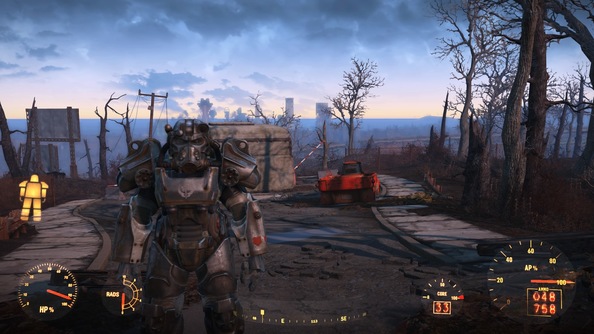 Rather than normal gear, Fallout 4 treats your power armour like a power-up. You get a banged-up old suit of it pretty early on, as opposed to being a really strong late discovery like in previous Fallout games. And like most of the stuff in Fallout 4’s world you can upgrade and customise it to the point that it’ll be unrecognisable after a couple of tweaks. You should be careful when using it, though, as it runs on a finite fuel source called fusion cores, which are found powering various machines throughout the wasteland. Everything you do while in a power armour suit – from running, to jumping and sprinting – depletes the fuel cell, so you should be conservative and pick up any that you find, and really only use it when you want to take down something particularly big, or need to venture into a heavily irradiated area. 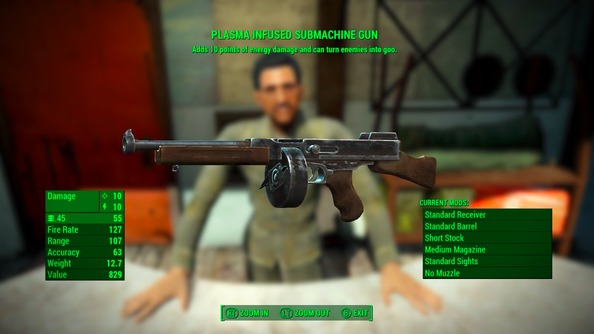 Combat in Fallout 4 is much more dynamic than previous games in the series – ghouls charge at you, continuing to crawl along the ground toward you even if you’ve blown one of their legs off, while super mutant Suiciders will chase you down holding a mini nuke, which beeps constantly as it approaches detonation. You’ll also come up against legendary enemies from time to time, which as well as being stronger than their standard variations, drop a unique weapon or piece of armour that has a buff or stat you can’t get anywhere else. You can get guns that don’t require a reload, or guns that fire exploding bullets, or armour that makes any number of the activities throughout the wasteland easier. These can be super tough to take down, especially if you bump into a Legendary Mirelurk King or something equally ferocious, but the loot involved often makes the challenge well worth it. 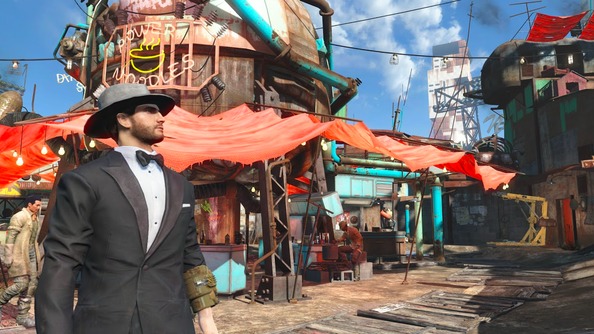 Making your character look badass in Fallout 4 is really great fun, but you should keep close eye on the S.P.E.C.I.A.L buffs that some items of clothing can give you. Early on, I was struggling with my loose-tongued persuasion skills, and I failed on almost every occasion when I tried to talk people around. There’s a lot of cool opportunities to get a leg-up in Fallout 4 by talking your way out of trouble, or into people’s good books. By equipping charisma-buffing attire when you’re having a chinwag, you greatly expand your options in conversations, and you’ll find certain situations easier and occasionally a lot more interesting. Or, you could just go full-tuxedo.

That’s it from us. How have you been getting on in the wasteland? Share your tips in the comments below!