Liz Edwards is running for her life. She ventured too far, searching for the most picturesque horizon in Fallout 4’s Commonwealth, then turned a corner and there it was: a Yao guai – this salivating, mutated black bear, towering over her in virtual reality. So she did the only thing she could do and deposited herself straight into the irradiated sea.

These are the perils of roleplaying a roaming VR artist in Fallout 4. People play Bethesda’s sandbox games in many different ways – as a pacifist, by sweet talking, or by taking up arms as a melee expert – but Edwards just wants to paint.

For three years, she worked as a character artist at Creative Assembly on the Total War: Warhammer series. These days, she makes a living entirely from creating incredibly detailed 3D paintings and videos with the HTC Vive, putting together complex scenes from popular movies, such as Wonder Woman, to be displayed at technology shows and drum up interest in the movie.

“I didn’t try VR until just before the Vive came out, at a HTC-Vive-run game jam in London,” Edwards remembers. “We all got to try the Aperture Science VR experience, as well as a couple of other demos, and it absolutely blew everyone’s minds. I immediately pre-ordered it just to play games on.”

I'm playing Fallout 4 VR as a roaming artist – using OVRdrop, I can paint in Photoshop with my Wacom while inside the game. Here are some paintings from my virtual sketchbook so far: pic.twitter.com/b3plSmH35t

At that time, art software Tilt Brush was included as a freebie when you bought a VR headset. Edwards took to it immediately, finding it to be an versatile art tool with lots of potential. “It didn’t take me long [to get used to] because I have a lot of experience with working in 3D and I was really keen to work in 3D in VR, since I’ve always done it on flat screens,” Edwards tells me. “I had this idea – wouldn’t it be cool to create a character and then share my own space with that character?”

More recently, Edwards saw a Finnish artist on Twitter who had imported their desktop into VR and were drawing scenes in Photoshop while virtually existing in this imaginary space. “He mentioned that he wished Skyrim was released on the Rift because he wanted to do some painting in Skyrim,” Edwards explains. “I thought, well, Fallout 4 is out on the Vive and I have this other piece of software that can bring my desktop into Vive, so I need to try it – this could be the coolest thing in the world. Once I got it working, I realised it could happen – I could actually be a wasteland artist.”

So she loaded up Fallout 4 and set off on her quest. Edwards plays the post-apocalyptic RPG without using console commands to warp around the map, bring items to herself, or to spawn in NPCs. A valiant decision given that her character is only interested in art. To that end, she puts all of her points into the strength stat so she can carry as much as possible and hit hard when she runs out of ammo.

I don’t really choose where I want to go in advance, I look at the map and think 'I haven’t been here'

“I don’t really choose where I want to go in advance, I look at the map and think ‘I haven’t been here’, or ‘I think there’s going to be something cool here’, or maybe I’ll see something in the distance and decide to walk right to it,” Edwards says. “I have to deal with anything that pops up in my way.

For example, I wanted to paint a view from the top of the Corvega Power Plant and it was just full of raiders – completely full of raiders all the way up – so I had to kill every single one of them. I had to climb all the way to the top and run about on these really scary, high up scaffolding areas full of raider snipers that I had to pop off before it was quiet enough for me to sit down and paint a lovely view.” 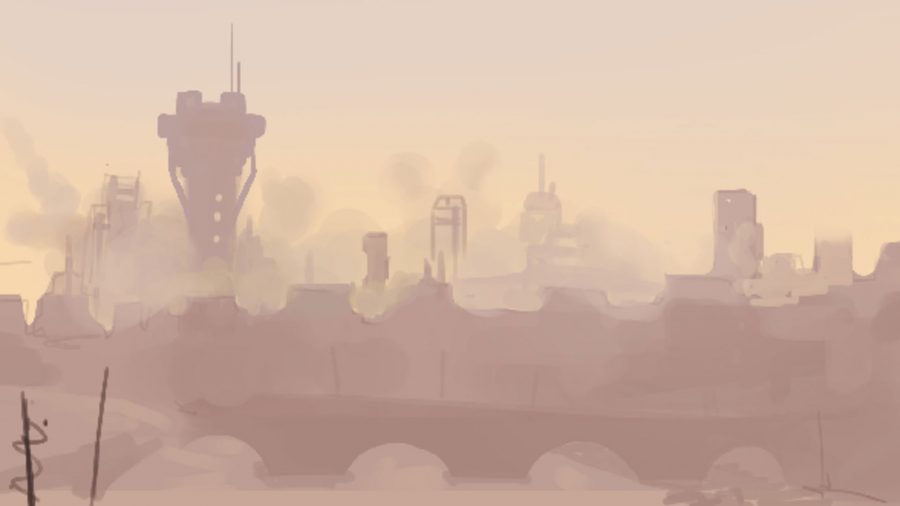 Edwards chooses to omit the gore from her works, instead focusing on the misty, muted backdrops of the Commonwealth. When things do get messy, though, her weapon of choice is whatever she can get her hands on – usually the 10mm pistol and the laser rifle, just because ammo is plentiful.

The misty industrial landscapes that Edwards captures in her art is a powerful feature of the world. Ed dives into the green-ish yellow hue of Fallout's Glowing Sea and explores how Bethesda deliver's a emotional narrative through the game's haunted aesthetic.

In her latest escapades, she has been running around with a spiked lump of wood that was plucked from a Super Mutant’s corpse – those strength points are paying dividends, then. In a simulated world like Fallout 4’s it pays to be prepared – you never know what might happen.

“I was just doing my thing and walking along the riverbank one time and this amazing fog rolled in,” Edwards says. “It was sunrise or sunset, and I turned around and realised there was a beautiful scene behind me. I had walked into this area full of maimed Ghouls, cleared a bunch out and thought it was fine. I started painting this beautiful, misty sunset when, all of a sudden, I started to hear this terrible crunching, growling, and snarling behind me.”

When painting, Edwards sits at her desk – an altogether more confined space than her actual play area, and her gun is not in her hand because she is holding a digital pen.

“I’m like ‘shit, where have I put my gun?’,” Edwards laughs, continuing the anecdote. “I put the pen in my mouth, scramble for my controller, which is my gun, turn around and good old Dogmeat had managed to keep the attention of both Ghouls that are coming for me. I couldn’t get up because I’m sat at a desk, so I have to twist in my desk chair to shoot over my shoulder and kill them. You should have seen me scramble for my controllers. I hadn’t put them in a sensible place, I had put them on top of each other so I didn’t know which was my gun and which was my Pip-Boy.”

The next step in Edwards’ adventure is to paint some portraits. She has already done one of Paladin Danse from the Brotherhood of Steel, cornering him in conversation before sketching him on her digital easel. Next up, her heart is set on a certain robot companion who is hopefully not expecting a hero to come to his aid.

“I couldn’t remember when I started if the characters just stand around, but it seems they’ve got little routes that they go on, which is incredibly annoying,” Edwards laughs. “I found that if I start a conversation with them, they stay still so I can trap them in place that way – they just stand looking at me like ‘what are we doing here?’. I want to do a portrait of Nick Valentine, but I have to do the quest first. He’s been kidnapped by the mob, so I need to go rescue him – then I can sit down and paint a portrait. If he’s physically trapped that will be really good for me.”