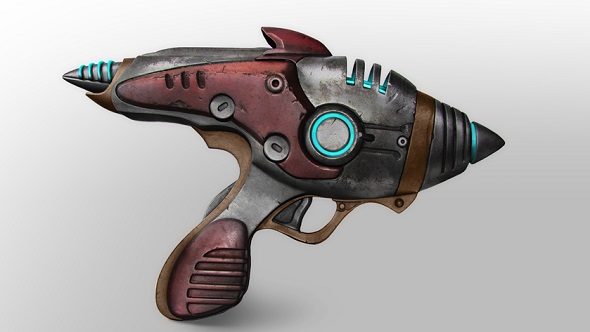 While it may not turn Super Mutants into piles of ash, it certainly looks the part. Made by Triforce, the company behind replica versions of XCOM 2’s beam pistol, Gears of War’s Torque Bow and Mass Effect’s Geth plasma rifle, they are now taking pre-orders for a replica of Fallout 4’s Alien Blaster.

For Fallout fans, check out this list of great mods for Fallout 4.

Complete with working LED effects and made out of polystone, this 15” replica of the Zetan laser pistol looks identical to the model found in-game. Much like the actual Blaster, it’s not easy to obtain with Triforce requiring a $100 deposit for every pre-order. The actual replica costs $400 and it unfortunately does not come with a supply of Alien Blaster rounds. If you don’t have any fusion cells lying round the house, I imagine standard batteries should keep the LEDs illuminated for quite a while.

The Alien Blaster has appeared in every single main-line Fallout game, acting as one of the most powerful energy weapons you can find in the wasteland. In Fallout 4, you can find the Alien Blaster inside a crashed UFO east of Oberland station. There is also the Hub’s Alien Blaster which can be found in the Nuka-World DLC, by completing the ‘Trip to the Stars’ quest. Let’s hope no Zetans died in the making of the replica.

If you do pre-order this Alien Blaster prop, it is scheduled to ship in Q1 of 2018. Hopefully, we won’t be living in an actual nuclear wasteland by then. For more information on this expensive space gun, check out Triforce’s official website.