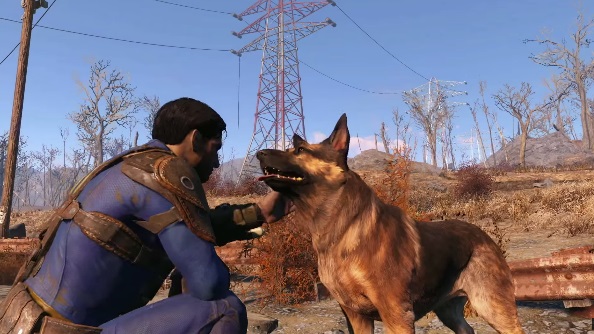 The wasteland is an exceptionally dangerous place for anyone, especially those who have just stumbled out of an underground vault with no idea what’s been happening for the last two hundred years. Making your way through the Commonwealth will be safer with a friend, and Fallout 4 has 13 buddies who can tag along and help you out. They won’t be queuing up to join you at the entrance of Vault 111 though, which is why we’ve put together this Fallout 4 companions guide to help you find and recruit them all.

Looking to add a little something extra to your game? Try one of the best Fallout 4 mods from our hand-picked selection. 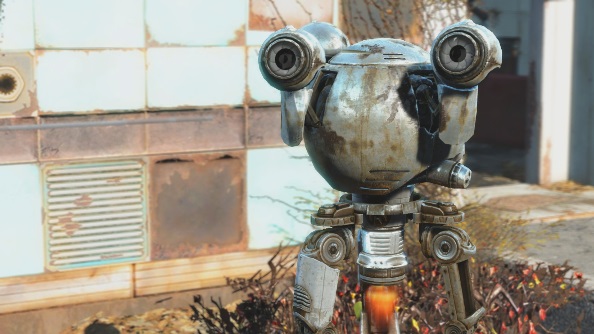 Where to find him: Sanctuary Hills
Quest: Out of Time
Special Perk: Robot Sympathy – +10% Damage Resistance against robot energy weapons

Codsworth is your posho-voiced robotic manservant, who has been in service with your family for two centuries. He’s your first companion, and can be recruited during the Out of Time quest after you leave Vault 111. He keeps the tone wonderfully formal by always referring to you by name. If you gain maximum affinity with Codsworth by being nice and generous to people around you, you can unlock his Robot Sympathy perk. 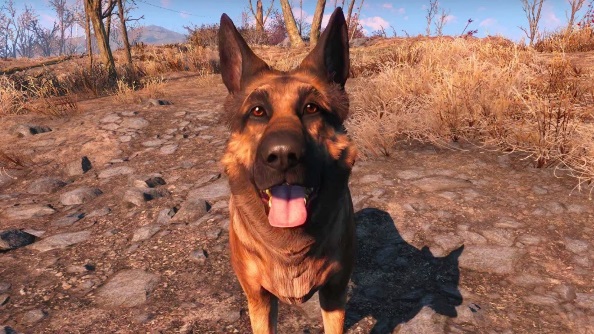 Where to find him: Red Rocket Truck Stop
Special Perk: Attack Dog – Dogmeat can bite and pin-down enemies, and cause bleeding and crippled limbs

Dogmeat can be found very early in the game as you set out from the first settlement of Sanctuary Hills. You’ll soon discover Red Rocket Truck Stop, where this loveable canine will be sniffing around. Dogmeat loves you unconditionally, so to unlock his special skill you need to spend a skill point on the Perk Chart. The requirements for Attack Dog are 4 points of Charisma.

Dogmeat can be dressed up with collars and bandanas found around the wasteland. Other dogs can also be recruited with the same stats as Dogmeat. The Rottweiler and Boxer dogs can be bought from an NPC named Gene for 250 caps (provided you pass a medium speech check). He wanders around the wasteland, so be on the lookout for him. A mongrel dog can also be found in non-populated zones such as forests. 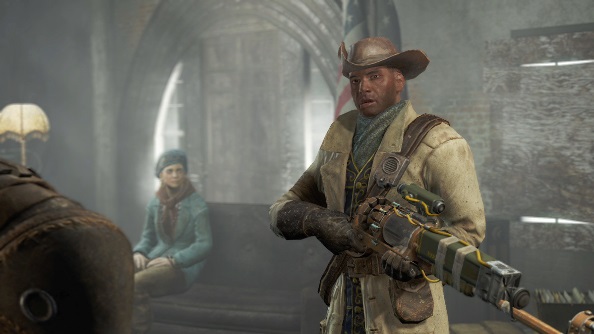 Where to find him: Museum of Freedom, Concord
Quest: When Freedom Calls
Special Perk: United We Stand – +20% Damage and +20% Damage Resistance when facing three or more enemies

Preston Garvey is the first human companion you can recruit. He’s the leader of the Minutemen, and you’ll first meet him as part of the main storyline on the When Freedom Calls quest. To unlock his special perk, you’ll need to gain maximum affinity with Preston by offering help to those in need, customising weapons, and generally being the ‘good guy’. Impress him enough, and you can romance him. 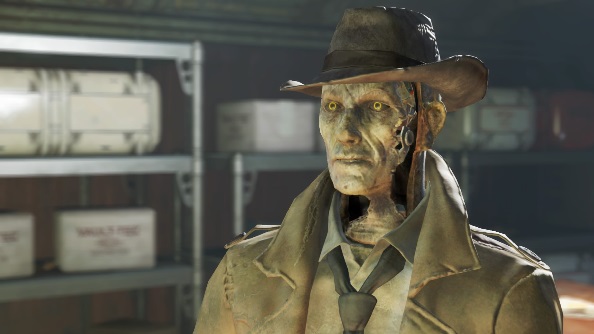 Nick Valentine is a noir-style private investigator, and a prototype synthetic robot. He’s a key character in an element of the main story, so following the quest line will lead you to the Unlikely Valentine mission where you discover him in Vault 114. When travelling with you, Nick is able to hack terminals of any level for you. His special perk grants you extra hacking abilities, but to acquire those you’ll need to gain both maximum affinity with Nick and complete his Long Time Coming loyalty quest. To get on Nick’s good side, act selflessly, keep away from the Brotherhood of Steel, and be generally pro-synth in decision making. 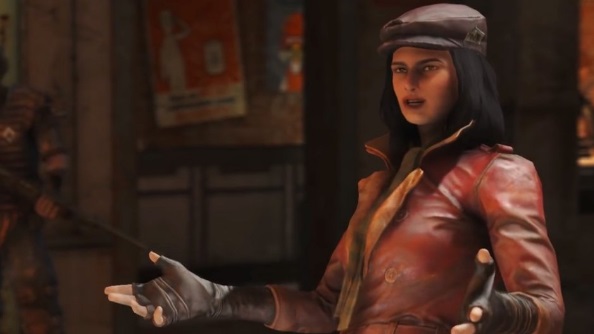 Piper is a Diamond City-based journalist who runs the Publick Occurrences newspaper. She can first be found arguing with security at the gates of Diamond City, but can be recruited by completing the Reunions sidequest. She’s a rebellious sort, and approves of you being sarcastic, helping the oppressed, and joining organisations like the Railroad and the Minutemen. Gain max affinity with her and she can provide you with the Gift of the Gab perk, and even start a romantic relationship. 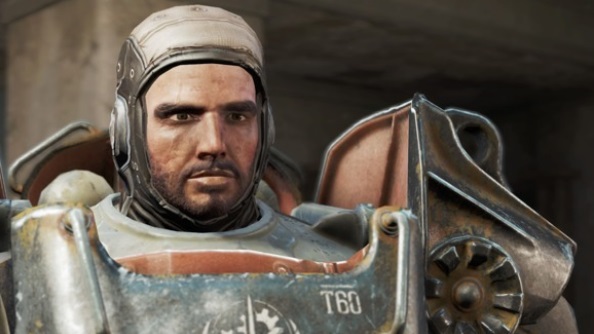 A Paladin-ranked Brotherhood of Steel soldier, Danse is exceptional loyal to his technology-despising faction. Complete the Call to Arms quest alongside him, and he’ll invite you to join the Brotherhood (joining benefits include free power armour). Danse can be romanced, so if hulking space marines are your kinda thing, bring him up to maximum affinity by crafting armour and weapons, being reasonable in conversations, being violent towards super mutants and synthetics, and generally following the anti-tech mantra of the Brotherhood. 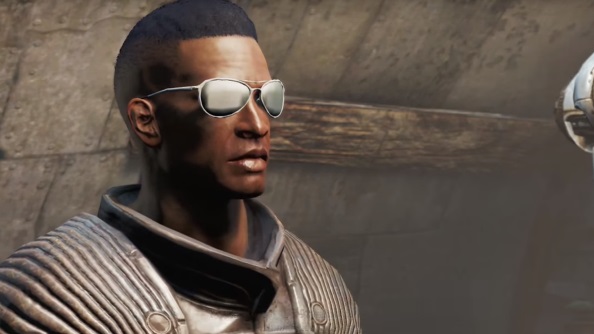 X6-88 is a synthetic working for the Institute as a Courser. You first encounter him as part of the Synth Retention mission, attempting to capture a rogue synth model. When returning to the Institute after the mission, X6-88 will be recruitable. Unlocking his Shield Harmonics perk will require maximum affinity, which can be built by assisting Institute scientists. Acting selflessly and helping people in the Commonwealth will not go down well with X6, so be sure to look down on humanity like the struggling cockroach it is. 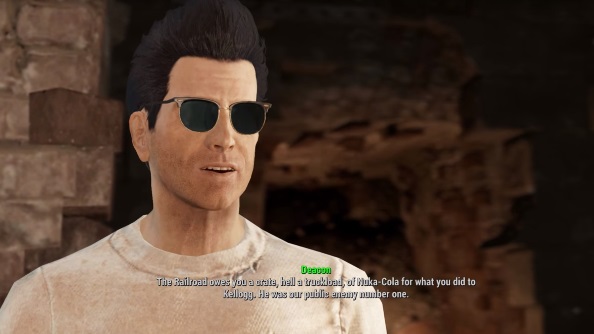 A spy for the synth-rights group the Railroad, Deacon is originally dispatched to monitor you and wears disguises to stay hidden. If you ally with the Railroad and complete the Tradecraft quest, Deacon will be available as a companion. He’s the best buddy to bring along if you’re playing stealthily, and his max affinity special perk helps you improve your own sneak game. To keep him happy, pick locks and hack terminals while he’s hanging with you, help synth characters out, and stay off the Chems. 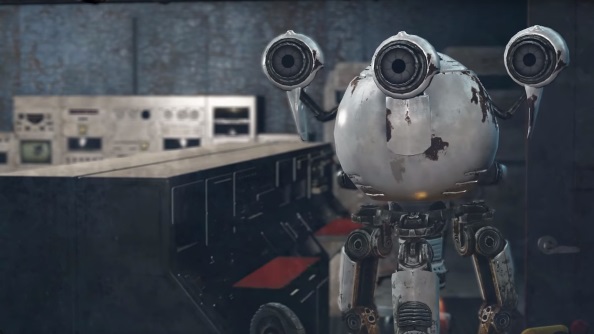 Where to find her: Vault 81
Quest: Hole in the Wall
Special Perk: Combat Medic – once per day, Curie can heal you for 100HP when your health drops below 10%

Curie is a french-accented Miss Nanny robot acting as a researcher in the Commonwealth. To find her, you’ll need to complete the Hole in the Wall quest, which is given by Dr. Penske in Vault 81. When the quest is complete talk to Curie and claim you are Vault-Tec Security, which will unlock her as a companion. Travel with Curie a lot and she will eventually request that you transfer her programming into a synth body, which can be done by accepting the Emergent Behavior quest. To gain her special perk, be sure to support others and be as non-violent as possible around Curie to build her affinity. And despite being a robot, Curie is open to that very human emotion called love. Be nice, and she could be your new girlfriend.

Where to find him: The Third Rail, Goodneighbor
Special Perk: Killshot – +20% accuracy boost for headshots in VATS

If you played Fallout 3, you may remember MacCready as the 12-year-old mayor of Little Lamplight, the creepy town populated purely by children. These days he’s relocated to the Commonwealth, where he’s working as a gunman-for-hire. He can be found in the basement of The Third Raid in Goodneighbor, and after a conversation he can be hired for 250 caps (or bartered down to 200 if your charisma is high enough). To get the Killshot perk, act like a mercenary around MacCready by asking for more reward money from quest givers, and stealing/lockpicking. He’ll also look favourably on you if you aid children or parents. When affinity is high enough, MacCready will ask you to complete the Long Road Ahead quest. He may have lost his wife, but MacCready hasn’t forgotten what love is, so he can be romanced. 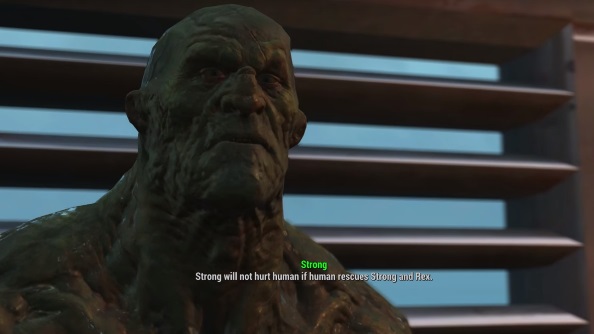 Where to find him: Trinity Tower
Quest: Curtain Call
Special Perk: Berserk – when your health is below 25%, you inflict +20% melee damage

Strong is a Super Mutant who can be recruited from Trinity Tower as part of the Curtain Call quest. He’s an exceptionally beefy companion with an amusing love of Shakespeare. He’s also on the perpetual hunt for the ‘milk of human kindness’, so being generous and helpful to other characters when he’s in tow will help boost his affinity. Being a Super Mutant, Strong also responds favourably to murder, theft, and eating corpses. Stay away from the Brotherhood of Steel though, as the faction anger him. Reach the magic maximum affinity level, and Strong will let you in on his Berserk perk. 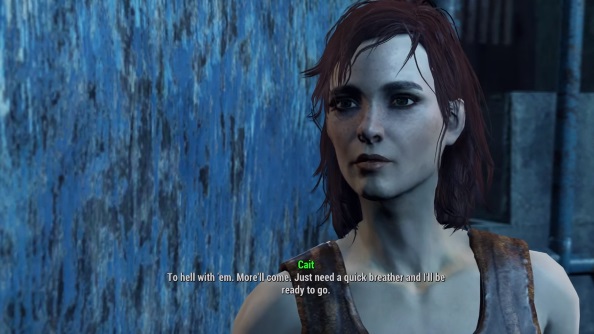 Cait is an Irish chem addict working as a pit-fighter. Brutish and angry, her rough life has equipped her with exceptional lockpicking skills, so she’s pretty handy for looting runs. Head into Boston’s Combat Zone to find her hanging out with raiders, where she can be recruited to join you. If you can get her to max affinity (be mean, selfish, and criminal), she’ll eventually talk about her addiction to Psycho, and ask you to help her find a cure. Complete the Benign Intervention quest, and she’ll help you out with the Trigger Rush perk. Cait can be romanced if you flirt with her. 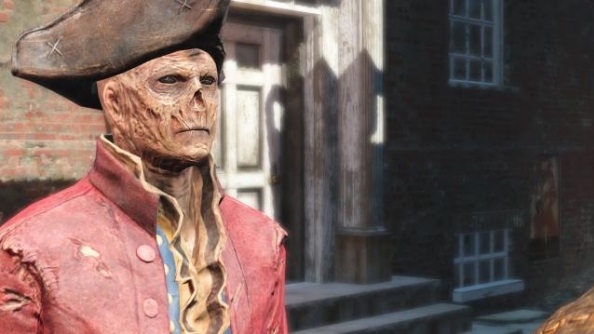 Where to find him: Scollay Square, Goodneighbor
Quest: The Big Dig
Special Perk: Isodoped – Criticals charge 20% faster when irradiated to 250 Rads or higher

Hancock is a ghoul and the mayor of Goodneighbor. He runs the town as a sanctuary for those who don’t fit in anywhere else, and so is a bit of an eccentric character himself. To recruit him, you’ll need to complete The Big Dig quest for Bobbi No-Nose, a ghoul living in Goodneighbor. Upon completion of the quest, Hancock will take a leave of absence from his duties as mayor to travel with you. Bring Hancock to max affinity and he can be your best friend or lover, and bestow to you the Isodoped perk. Sweeten him up by using chems, donating items, and keeping your sticky thief fingers to yourself.