It would not be out of line to call Bethesda’s reveal of Fallout 4 gameplay an embarrassment of riches. Whatever you thought Fallout 4 would be, however big you thought it would be, what Todd Howard both showed and promised on stage before E3 was much, much bigger.

But amidst everything they showed, the real scene-stealer may have been a ridiculous collectible Pip-Boy that really works. Start saving for that special edition now, folks.

Fallout 4 breaks from series tradition by having you star as someone who was there the day the nuclear war started. Somehow you are still alive to wander the wasteland 200 years later, but Fallout 4 begins in Fallout’s prewar future where the 1950s never ended. Your character has a family, a house, and a robot servant named Codsworth. In the gameplay we saw, a Vault-Tec salesman showed up at the door to take your info (for character creation purposes) and promised you and your family a spot in the shelter.

Then the bombs hit and 200 years later, your character is emerging into the wasteland alone. Somehow Codsworth is still alive (and will call you by one of a thousand names that Bethesda have recorded in voice sessions). But your first real connection and companion comes when your character encounters a stray dog… who will FINALLY obey commands via a context-sensitive system. It’ll fetch, attack and, most importantly, STAY.

God, if I could have those hours of my life back during which I tried to keep Dogmeat alive in Fallout 1…

Anyway, that’s just setup. Then Tood Howard explained that since you’ll be spending so much time staring into your Pip-Boy in the game, they lavished a lot of care and attention on it… and even made a real-life version. 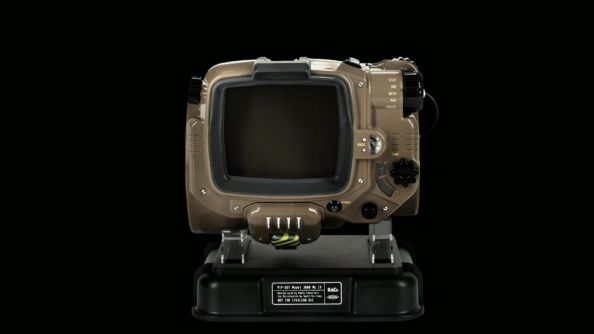 There is an actual, physical Pip-Boy you’ll be able to wear on your wrist. It will accept your smartphone, and Bethesda have created an app for smartphones that will let you use your actual, “real” Pip-Boy and have it work in-game.

“As far as stupid gimmicks go,” Howard said, “this is the best fucking one I have ever seen.”

Bethesda also revealed a F2P game called Fallout Shelter, which is available right now on iOS mobile devices. It’s part XCOM, part The Sims, and part a whole bunch of other things. It’s a resource-management game where you have to look after a whole vault, and keep the morale of your vault-dwellers high. You build new facilities, send scouts out into the world, defend against incursions, and get your dwellers to make new vault-dwellers. 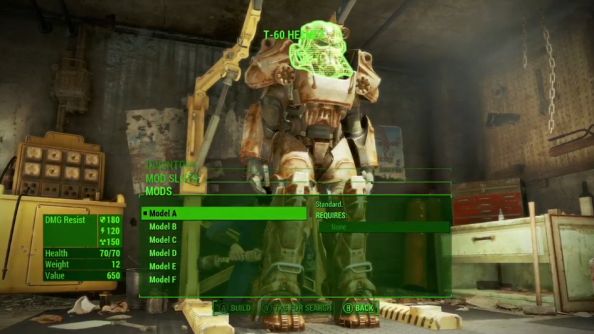 But the really crazy thing about Fallout 4? It’s also basically Fortnite. You can build shelters in the game, stock them with creature comforts, fortify them against intruders, and expand them to turn into fully-fledged NPC settlements. You can even run brahmin cattle caravans between your own settlements in different corners of the game world.

That also couples with a really extensive crafting system that lets you break-down and recombine stuff you find in the world. You can use it to build weapon improvements, or new defenses, or new armor for your character. The demo even showed a fully-functioned Rock-It launcher blowing someone apart with a weaponized teddy bear.

You can also build a doghouse for your dog.

But all of that is entirely optional. It’s just a thing that exists in the world that you can do. Or you can treat it like just another Fallout game where you wander the wasteland.

It was a hugely impressive and ambitious presentation. And the real kicker is that Bethesda are promising the game for November 10 of this year.