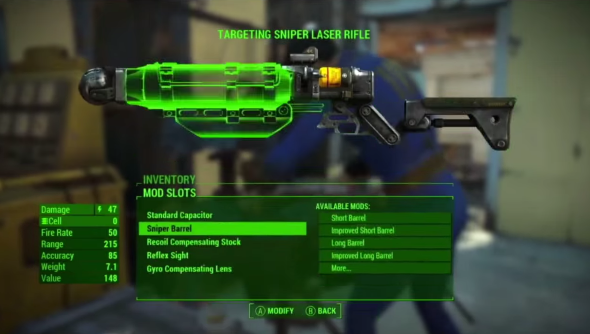 At the first big event of E3 Bethesda showed off Fallout 4 in all its glory. Coming out on November 10th this year, Fallout 4 is Bethesda’s most advanced and detailed game world, and that is completely apparent in this nine minutes of gameplay footage that game director Todd Howard showed off at the event.

Starting pre-apocalypse in 1950’s Boston, the video takes you through the game’s neat character creation system, before taking a stroll out to the wasteland for some VATs action.

The game is being built on a next-gen version of Bethesda’s Creation engine, so whilst not completely new tech it does look leaps ahead of Skyrim in terms of detail and overall effect. Clothing has texture, there’s much more moving detail on robotic characters, and the world generally feels much more alive.

The demo shows off how the Sims-like character creation offers great depth, without the need for any sliders. Just click and drag on the character’s face to change shapes and skin tones. You can play both genders, and characters will even call you by name thanks to over a thousand voice-recorded names. Your character also has a voice, and conversations can be played out in a Bioware-like cinematic camera if you so wish.

Out in the wastes you’ll be collecting a heap of junk, which traditionally has been used in Fallout games to trade in for bottlecaps. Not this time though; every piece of junk can be reduced to component parts and used in Fallout 4’s ridiculously deep crafting system. Feeling like an advanced version of Dead Island’s weapon crafting, Fallout 4 has 50 base weapons and over 700 modifications, allowing you to turn any gun into an impressive amount of variations. Some are sensible, some are plain bonkers.

You’ll also be able to craft shelters to create your own player housing, and even embark on a Fortnight-like defence game where you build turrets and link up power generators to keep your newly-found settlement safe from super mutants and ghouls.

Fallout 4 releases this year on November 10th. I couldn’t be more excited for it. But what do you make of our first real look at the game?