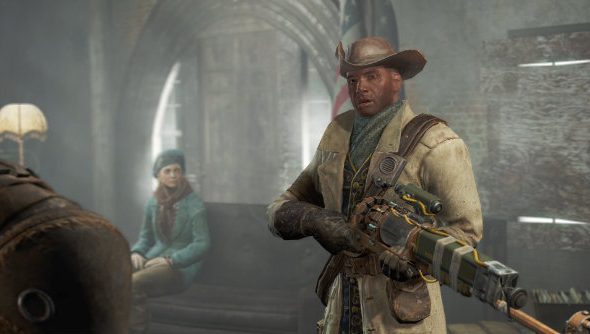 The barrage of Fallout 4 information continues with this latest video from the stage at E3. This one is all about your companions.

In the last video we went behind the scenes and saw how Dogmeat’s animations came from a real dog, but this one explains how your canine companion will actually function in the game.

First off, Dogmeat can’t die. Well, that’s what game director Todd Howard says, but if you listen really closely it sounds like he could die. It depends on the circumstances.

Any companion who is locked in and travelling with you can’t die. They’re essentially invincible in this state – they can only be downed, but you can revive them with a stimpack. That’s what he says, so I assume that means perhaps they can die when they’re not with you.

Howard says he didn’t want to create a situation where players felt like they had to reload when their companion died, so that was the reasoning behind not letting them croak it when you’re travelling together.

Personally, I think they’ve just done it so they can kill them off later and make you all cry.

In other news, despite you dog being called ‘Dog’ in the trailer, you begin calling him Dogmeat at a later point. Lovely.

Watch the video below: