Update: Fallout 4 is definitely a thing. There’s a trailer and everything.

Bethesda have launched a website with nothing more than a ‘Please Stand By’ notice. For anyone familiar with a certain series of games, this image is instantly recognisable and can mean only one thing.

Fallout 4 is real, and news of it is imminent.

Update:Bethesda have launched the official Fallout 4 website, with a pre-order link for a PC version, and this lovely new trailer.

For more information, check our news story on the full announcement. 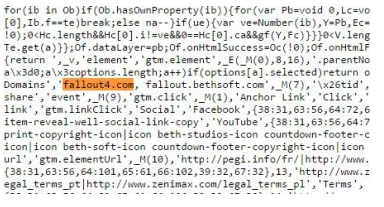 And if that isn’t confirmation enough, Bethesda seemed to have accidently made live the official Fallout 4 website, which for a short time displayed the exact same countdown. It was shortly taken down, but a WHOIS on the site’s domain reveals some pretty conclusive stuff.

Looking deeper into the source code, we can also spot pre-order buttons for PC (duh), PS4, Xbox One, and even the Xbox 360 and PS3.

Fallout 4 is a thing, and you’re going to want to be here tomorrow at 3pm BST to find out more!

There’s a countdown beneath the text, which will conclude at 3pm BST tomorrow. It looks like our first big information dump about Fallout 4 will be coming within 24 hours. How exciting.

Until then, please stand by and start speculating – we did in our everything (we think) we know about Fallout 4. Do you agree with our speculations?