The era that saw us shackled to our desktops every time we wanted to play a PC game could be behind us, with Steam Machines, living room PCs and the Steam Link entering our homes. The latter released in early November, so we temporarily freed Fraser and Matt from their desks and got them to put Valve’s sleek streaming device through its paces.

While we’re on the subject, be sure to try out the best free Steam games.

Will they be crawling back to their offices, or have they been converted? [Ed: offices, regardless.] 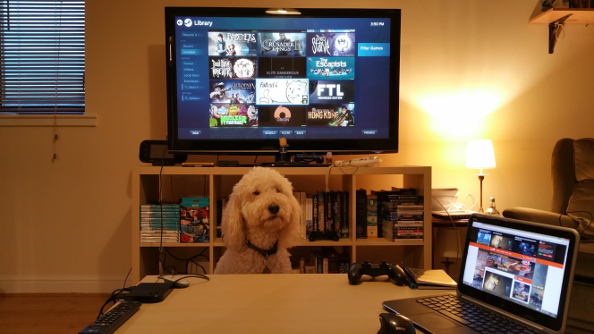 If Valve’s Steam Link, the slick, diminutive disk-like streaming device that the House of Half-Life launched last month, was for anyone, it would be me. My PC is too big to lug all the way into the living room every time I want to play on a 50 inch screen, and a Steam Machine or wee, boxy PC seems like overkill when I already have a solid gaming rig. So I didn’t really have to think twice about buying one, and I have no regrets.

The addition of the Steam Link to my living room has dramatically changed my gaming habits. For quite some time, I’ve resented leisure time spent in my office. I spend most of my work hours in there, typing articles and playing games for review (it’s a hard life), so the last thing I want to do is go back in there once my time is my own again. It’s been a conundrum. I love PC gaming, but my PC was tethered to a room I wanted to spend less time in.

Over the last few weeks, my living room has been taken over by PC games, to the point where I’m certain that my Wii U and PS4 are starting to worry that they’re destined for the trade-in scrap heap. I didn’t really anticipate just how well the Steam Link would work. I expected to be able to play a bunch of indie games, specifically those that favour gamepad controllers over my mouse and keyboard setup, but I’ve played everything from Fallout 4 and Just Cause 3 to games I don’t even have on Steam, like Assassin’s Creed Rogue. 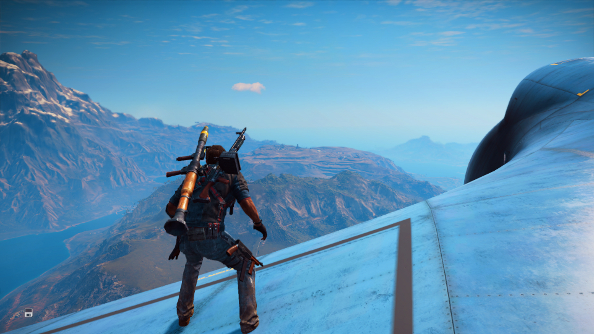 My first tests did not leave me particularly impressed. Fallout 4 looked great on my gargantuan telly, but audio lag utterly killed the experience. I noticed similar issues with other games, and it seemed like I was far from the only one experiencing these problems. It was particularly disappointing given that, earlier in the year, I splashed out on a fancy dual-band Asus router, and it turns out that the Steam Link’s cap means it doesn’t make the most out of gigabit networks.

Thankfully, things have improved considerably since then. At first, I saw a significant improvement by ditching wireless and hooking my Link up to my router directly. This proved to be a bit of a hassle, since my router is in the hall and my Link is in my living room, requiring me to gently tug on the ethernet cable connecting it to my PC in my office so that I could move the router into my living room. It’s a temporary measure, though.

An update to the Link itself has also made my experience a lot smoother. Fallout 4, for instance, runs as well as it does when I’m sitting at my desktop, while more intense action games like Just Cause 3 are mostly free of all but the occasional hiccups. 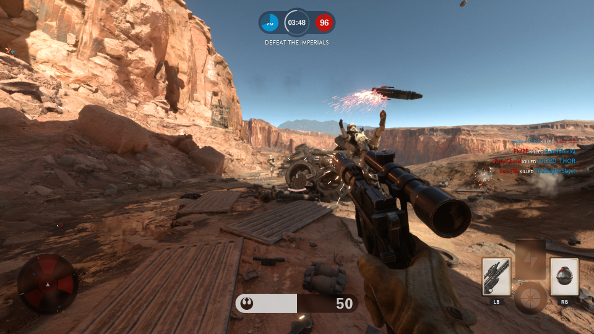 The real test, however, is in how the Link manages online games. Impressively, it handles them quite well. I recently put Star Wars Battlefront through its paces, and while switching from mouse and keyboard to my Xbox 360 controller means that I lose my competitive edge, there have been no performance issues whatsoever. I haven’t even noticed any artifacting. It looks just as great as it does on my desktop, and input and audio lag appear to be non-existent. Similarly, Elite: Dangerous works pretty damn well, with my only complaint being that I can’t comfortably rest my ridiculous flight stick and throttle on the sofa. It keeps falling off and scaring my dog. Maybe I need a wee tray to put on my legs?

This is not to say that the Link doesn’t still have a few problems. The absence of a power button is completely ridiculous, for one. The Link has to be turned on using a controller, and it’s clearly been designed more with the Steam Controller in mind. I use a wireless Xbox 360 controller, and I confess that it’s a bit of a pain. Every time I want to turn my Link on, I need to take out the donge, put it back in and then turn on the controller. If I don’t remove it from the USB slot, the controller won’t properly sync up with the Link, which means that it won’t turn on.

Some issues aren’t Valve’s fault, necessarily. A lot of Steam titles still use third party launchers, for example, and thus require an extra step before working. Fallout 4 is one, and necessitates either going back to the desktop to navigate the menu, or requires a spare mouse, which can be plugged into the Link itself. Non Steam games can also be a bit fiddly. Origin games are a particular pain in the arse, and so far I’ve not found a way to play anything on Origin without at least one trip to my office. Thankfully Uplay doesn’t have this problem, and I’ve been playing Assassin’s Creed Rogue without any hassle. 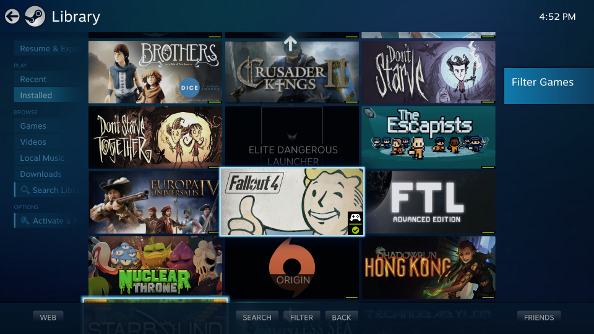 Big Picture Mode has proved to be a boon. It’s ugly, unfortunately, and not always the easiest platform to navigate, but it does what I need it to do. I like that Valve’s also provided a bit more information on the games featured in the store, noting if they are controller compatible or if they require a mouse and keyboard occasionally.

The Steam Link is not the perfect solution to playing PC games from the comfort of your couch, but it comes damn close, and given its low cost and small size, closer than any of the alternatives. Setting it up sometimes requires a bit of extra work, but when a game gets going, it’s frequently seamless. I’ll be heading back to my desktop whenever I fancy playing a strategy game, a first-person shooter or an MMO, but for everything else, you’ll find me sprawled out on my sofa. 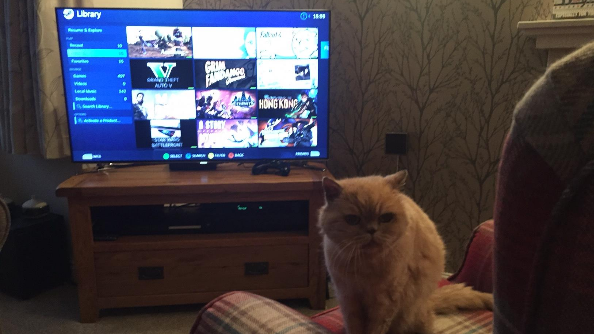 The Steam Link is the best PC gaming gadget I’ve ever bought.

I work from home, and spend the majority of every day at the PC in my study. After eight hours of hammering out words about games on this keyboard (it’s a hard life), the last thing I want to do with my evenings is stay confined in this little room using that same keyboard to kill digital men. As a result, for months I actually – *whisper it* – abandoned PC gaming. I began to love my Xbox One and gaming on a massive TV in the living room. It’s an escape from my work environment.

The Steam Link has changed all that. A £40 little box of joy now drags games from my PC down some wires and into my TV. I plug an Xbox controller into the Link, and it all just works. The set-up takes about two minutes. The Big Picture mode is pretty intuitive. Most importantly of all: games run, and you can’t tell that you’re not playing directly on your PC.

There are some caveats. I’m running a pretty generic router in my house: not the rubbish your ISP would give you, but nothing high-end. When running the Link wirelessly, I found it pretty hopeless. Even menu screens lagged and froze like a YouTube video coming down a 56kbps line, and I personally would never reccomend the Link to anyone without a wired solution. For me, with the TV I use, my PC, and my router being all on different floors of the house, I opted to use Homeplugs to create a network with my electrical cabling. It cost me £60 for the plugs, but it has proved a tidy, flawless solution to my problem. There seems to be no disadvantage to using Homeplugs instead of a direct Cat5 wired connection. 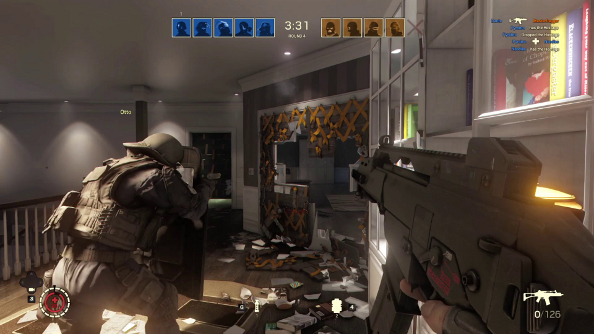 Beyond the fact that the Steam Link really does work, the thing that has pleased me the most is that it functions so well with non-Steam games too. Thanks to hunting down deals on every game I buy, half of my games are on other clients like Origin, Uplay, and GoG Galaxy. This doesn’t faze the Link at all, and thus your entire PC games library can be played on your TV. The GoG Galaxy version of The Witcher 3 is smooth and gorgeous. I expected disaster to strike when trying to play Rainbow Six Siege, but the Link just opens Uplay and loads the game, no faffing necessary. Origin is a little more hit and miss: often the game opens in a window behind Steam Big Picture, so you need to Alt + Tab to it. Not a problem if you have a keyboard plugged into the Link, but since I’m using it more like a console with just a controller I do occasionally have to nip upstairs to the PC to get things started. It’s not entirely ideal, but it’s a small price to pay considering how excellent the Link performs.

For most of you, latency is going to be a big concern. Incredibly, it just doesn’t seem to be a problem for me. When I first purchased the Link a few days after it launched there was an issue with audio lag, which could be as bad as a whole second, but a firmware update eliminated that entirely. I’ve played matches of Rainbow Six Siege online and found the experience completely indistinguishable from playing at a desk. It’s admittedly not the most ideal game to play with a controller, but as far as performance goes it was as well oiled as a Colt 45’s top slider.

Visuals are capped at 1080p and 60fps, but that’s exactly the standard we hold everything to. I’d normally play at higher resolutions on my monitor, but what’s a few hundred pixels in trade for a 42” image? In most cases I’ve found the visuals stream with no issues at all. Really intensive games can occasionally artifact a little bit: The Witcher 3’s forested areas can sometimes break into pixels for a fleeting moment. But I’ve only found this on the most demanding titles. Everything I played – Life is Strange, Fallout 4, Rainbow Six Siege, Star Wars Battlefront – looks as awesome on the Link as it does on the host PC. Better, in fact. Because big screens are awesome, and comfy sofas increase gaming pleasure by a good 50%. 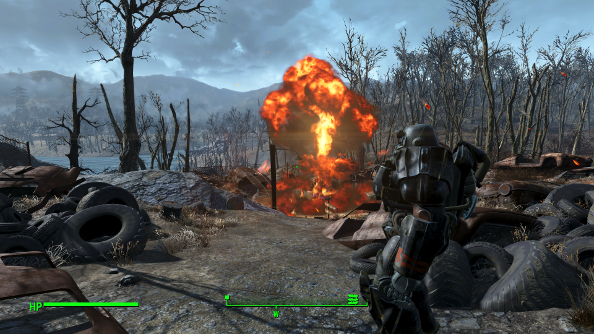 What I’m saying is: I’m never going back. Sure, I’ll still game at the desk when it comes to playing something like Counter-Strike, but unless the game requires astonishingly twitchy, precise mouse control, I’m living room bound for eternity now. I’m currently just using a controller since most things I play are action games and the like, but I’ll eventually pick up a wireless keyboard and mouse so I can play those classic RPGs and some strategy games too. Hey Razer, release that Turret already.

If you read our site you’ve almost certainly got a good PC. Don’t bother dragging it around the house. Don’t bother spending needless money on a Steam Machine. Drop cash on Steam Link, grab some homeplugs if necessary, and play from your favourite armchair. You won’t look back.

Have you put the Steam Link through its paces yet? What have your experiences been?