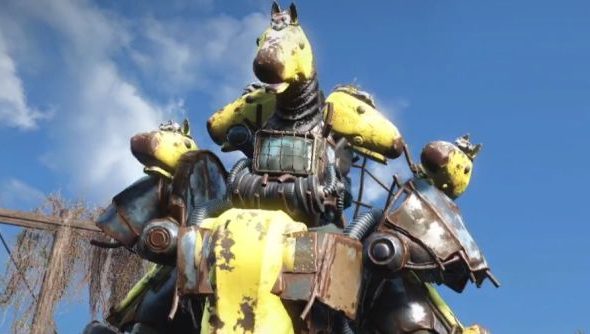 Oh, how we love a bit of drama. News that Bethesda was to break down the walls between PC and console and allow mods for Fallout 4 on Xbox One took plenty of people back when it was announced, but it appears to have been a popular move. One problem, though: some crafty Xbox One owners are nabbing PC mods and uploading them as their own.

A Fallout fan, but want to try something new? Have a look at the best RPGs on PC.

Well, that’s according to PC gamers on Reddit. The allegation is, PC mods that aren’t quite the finished article and may well not work properly are being mopped up by Xbox ‘modders’, packaged together in little compilations and uploaded as their own.

Predictably, judging by the reaction on Reddit (and perhaps rather understandably), the PC-console divide is alive and well.

The person who reportedly stole one of the mods – someone who goes by the name of “GamerAim” – claims he only uploaded it for his own “personal use”, ignoring the fact that the unfinished mod may well have broken the save files of anyone who used it. He also claims that the user behind the original mod is a “PC elitist”.

“It is a statement against his classism and elitist mindset,” he continues. “He’s a troll and a garbage person who made good content, so in retaliation, I shared it with the console gamers he hates so much. This was always about supporting my fellow console gamers, never about taking credit for something that was mine.”

In reply, the man behind the original mod, DDproductions83, has uploaded a near 25 minute video where he lays out his thoughts on the issue and just generally has a rant. You can check out exactly what he thinks in the video below.

As for Bethesda itself, Head of PR and Marketing Pete Hines has responded to tweets on the issue by claiming gamers should report the mod, stating each one will get looked into and addressed accordingly, regardless of what platform it is for. So, no major shift in policy then.

The release of mods itself on Xbox One appears to have been a huge success, however, with Bethesda revealing Xbox traffic was 50 times the initial Fallout 4 PC mod launch. Mods are also due to hit the PS4 version, though no specific date has been announced.