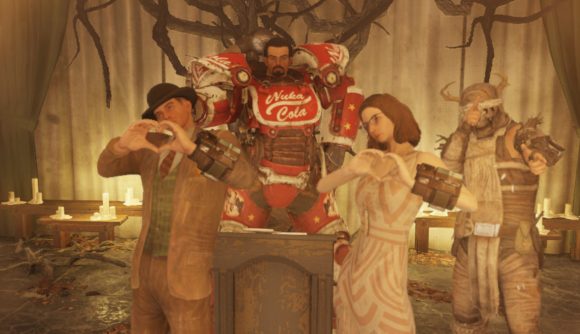 Yes, not everyone is in love with Fallout 76, but some players are finding love in-game – or at least bringing existing love to the West Virginia wastes. Bringing the game in line with the grand tradition of open-ended online multiplayer titles, a couple has gotten married in Fallout 76, with a proper ceremony officiated by a guy in a suit of power armour.

Images from the wedding made the rounds on social media this week, showing off the ceremony itself, an underwater afterparty, and loads of gaudy Nuka Cola branding to really bring that Fallout feel home. You can browse photos from the ceremony on Twitter, as well as a host of other events user Rickforb has been involved in – mostly RP scenarios played out with the in-game photo mode.

So was the ceremony real or just a bit of in-game fun? “Both,” apparently. “We were already married, but just signed papers with no ceremony or celebration. And that nice guy we met found wedding rings somewhere in game and organized the whole thing for us.” The friendly official also discussed his side of the ceremony on Reddit.

Our feelings about Bethesda’s latest are well-documented in our Fallout 76 review, but we’re not the sort to be jerks about other people having a good time. Most of the replies to that original tweet are words of congratulations, but there are a few bad apples among them – don’t be one.

If you want a few more positive stories on Fallout 76, check out a photographer’s tour of the game through West Virginia. I’d point you toward the negative ones too, but chances are you’ve already seen most of them, and you know where to look if not.