What are Fallout 76 public events? While roaming Appalachia in Fallout 76 you’ll often encounter other players trying to complete their own objectives. These can be personal quests they’ve discovered or, in some cases, you may be able to join in as it’s a public event.

These are different to main missions and side-quests. Public events are essentially community quests that can be tackled by anyone on the server – not just your party – as long as they’re in the right location. They come in different flavours, too: some have you battling it out against waves of foes and others could be escort missions. Sometimes you might even be called back to defend your base from various irradiated nasties.

If you’ve played Destiny 2 then you’ll be familiar with the idea – Fallout 76 public events work in much the same way as they do in Bungie’s MMO. You’ll find other players in the world fighting a boss or a horde of enemies and can join in to reap the rewards.

To trigger public events, all you need to do is enter the area they’re taking place in. If a public event has recently ended due to being completed by other players then you may have to wait a while. This is a rarity. For most major locations, and some minor ones, the event will kick off as soon as you discover the location.

If you want to partake in an event somewhere else then look for yellow hexagons on your map – these indicate all ongoing events. If you’ve already discovered that location then you can fast-travel there for a few caps and join in the fun.

While exploring, you’ll also come across workbenches that you can claim for yourself. They’re usually flooded with enemies though, so you need to clear them out before you can start building and take the place as your own. If you claim a location then don’t put down adequate defenses like turrets and traps, enemies will attack and claim it back. We found Billing’s Homestead in the south-west near the start of our Fallout 76 journey but neglected to place anything there in favour of being a nomad. A while later when we’d made our way up the western river, we got an event notification that Billing’s Homestead was under attack from Feral Ghouls. This is another form of event; enemies can wage war on your base and you’ll be tasked with going back and defending it. 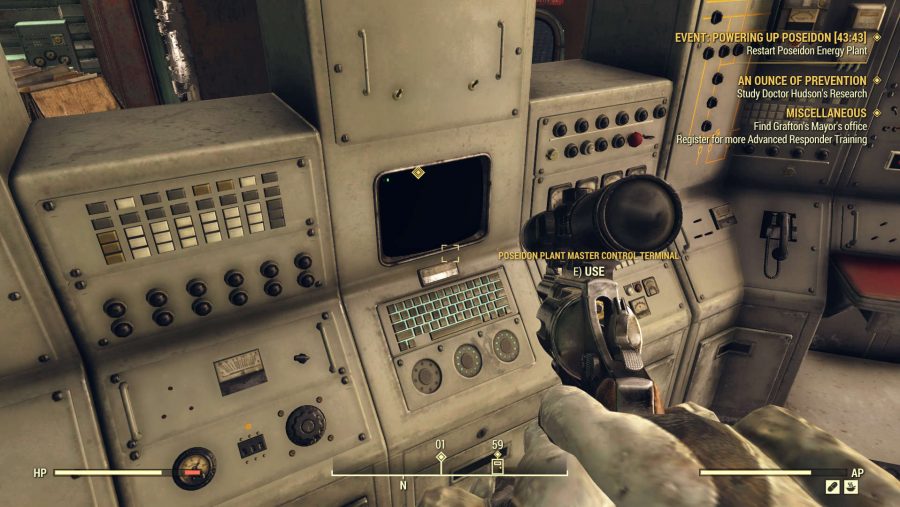 Not all Fallout 76 public events are the same. There are, in fact, a few different types: wave defense, escort missions, elimination, versus, and PvP. Some of them focus on taking down incoming waves of enemies – one we encountered at the Grafton Steel Yard sent a drip feed of level 15 Anglers our way, all while the Super Mutants inhabiting the location shot at us from behind. They’re not all like that, though. We’ve done quite a few that have been focused on achieving an objective, making the surrounding enemies a mere obstacle.

Take the Powering Up Poseidon event as an example. It’s down at the Poseidon Energy Plant in the southern portion of the map and requires you to essentially repair the entire plant. You’re given a full hour to complete the task, which is generous even if you’re tackling it solo – we completed it with over 40 minutes left and we were by ourselves. It consisted of chugging down some Rad-X then running around the radiation-filled plant, fixing burst pipes and busted machines, all while gunning down the army of Scorched that had made their home there. 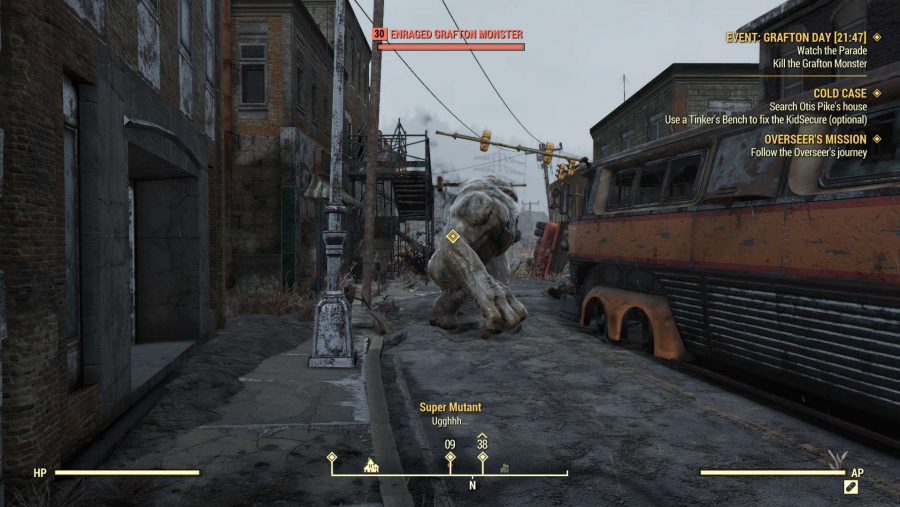 Another interesting event we found was the Grafton Day Parade. Situated in the northern town of Grafton inhabited by Super Mutants, we took out a few of them then had a look at the “parade”. As it happens, the infamous Grafton Monster is the main attraction. The Super Mutants started shooting at him then after he wiped them out in one sweep of his gargantuan arm, he focused on us. Despite the headless hunk being level 30 while we were much lower, we took refuge inside the Grafton prison and took him down from behind cover.

Like Grafton, Morgantown is another location with plenty of missions for groups to partake in, including the Back on the Beat event. Here you have to escort a friendly Protectron named Steelheart back to his recharging pod. The caveat is that the Protectron is under a constant barrage of attacks from Feral Ghouls.

While most Public Events are tied to certain locations, there are also some that will randomly occur in different areas, such as The Messenger, which sees you escorting a Mr. Handy robot to deliver a message to a nearby location. Another random public event is Protectron Horde, which simply involves going to the event’s location and eliminating every enemy Protectron there. 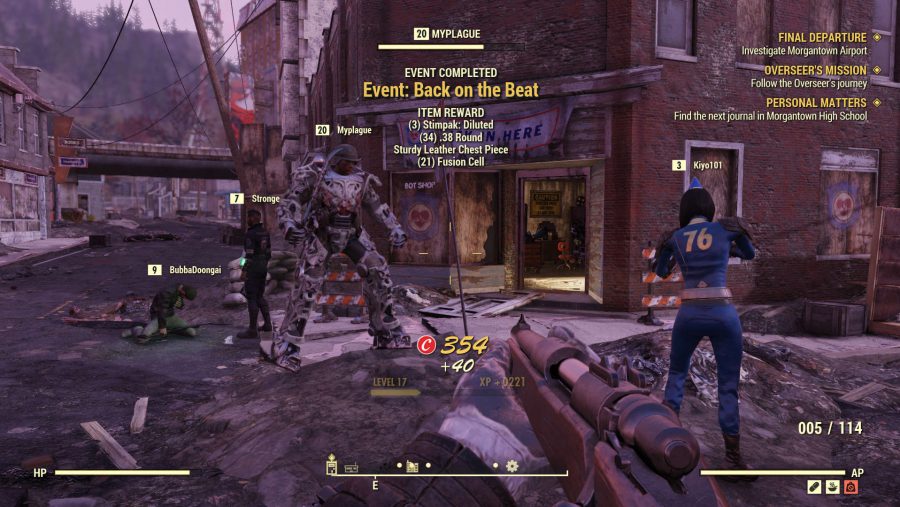 Are events worth it? So far they seem to be. You get a bunch of random items as a reward, from weapons and ammo to healing items like Stimpaks and RadAway, even plans you can learn to construct new objects around your C.A.M.P. Fallout 76 is much more reluctant to give you excessive amounts of items like previous Fallout games have, so earning rewards like these can be crucial to staying alive. These rewards are especially helpful if you’re exploring some of the higher level areas like The Mire – you’ll burn through Stimpaks and RadAway pretty quick when there’s a Scorchbeast hunting you down from the skies.

There’s also the fact that public events are a lot of fun. Quests are something that you do by yourself; only you can interact with your relevant quest items and listen to the Holotapes. Events on the other hand are perfect for you and your pals, along with strangers to partake in. In one northern area called Prickett’s Fort, you can discover a camp full of robots that all appear to be preparing for a Civil War reenactment. “We even use real bullets for extra realism!” the curator of the historic location tells you. 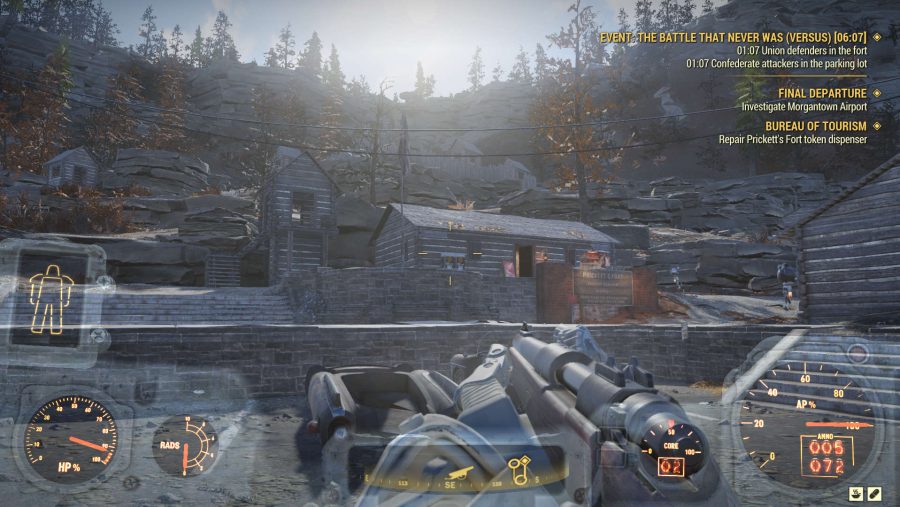 You are instructed to either wait in the parking lot if you want to join the Confederates or head up to the fort to fight with the Union. After the timer runs down, you’re effectively taking part in a team deathmatch against a bunch of robots in fancy dress – you win by taking out all of the enemies.

Events are just a small part of Fallout 76 but they’re a great way to experience the game with others even if you’re exploring the rest of Appalachia by your lonesome. Of course, there’s a number of events we haven’t encountered yet but this table lists all the events we know about, along with their location.

As with all of our Fallout 76 guides, we’ll update this with more information on newly discovered events and unique rewards as soon as they’ve been discovered, so check back regularly for all the latest details on Fallout 76 public events.