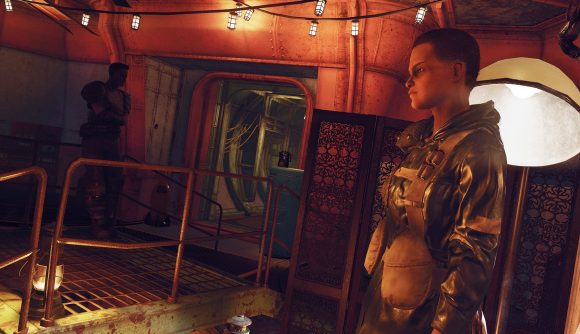 Fallout 76, Bethesda’s post-apocalyptic MMORPG, offers a whole lot of scope for some impressive base building. There’s even a whole subreddit devoted to amazing Fallout 76 settlements. And, over on there, a bit of a theme has started emerging, with users posting snapshots of some awesome and unusual builds that plonk their homes right in the middle of Appalachia’s rad-infused waters.

Fallout 76 fan RADiCALRUX recently posted some screens of their “Fusion junk submarine” settlement build on the subreddit and it’s quite a thing to behold. Plonked in a big ol’ body of water, it’s a “two-seater” base build constructed in the “utility shelter” in the submerged part of the submarine, with a hatch down into its metallic bowels, as well as a small sleeping area, radar/communications area, engine room, and steering/observation room. As a whole lot of fans have pointed out in the replies, it’s an incredibly detailed build that really looks the part throughout.

We can see the interior full of carefully placed control benches, pipes, and all kinds of other features that make it look just like you’d imagine a Fallout-style submarine base to look. RADiCALRUX has told users asking the creator how they made such an impressive built that it took “a lot of patience and imagining what else your pieces could be”, and it’s clear to see from the screens. They also say a video is coming so hopefully we’ll get a proper look-round soon.

Elsewhere, Fallout fan A-City-Of-Geese has posted another submarine build that, while different in style, looks just as impressive. This one looks a little more brightly lit, with glowing ‘reactor’ signs, electrical boxes, and bulbs hanging from its corridor ceilings, as well as a mixture of technical areas full of control panels and cosy residential spaces, complete with a power armour station. You can take a peek at these below:

And here’s the second: If you’re keen to get out into the wilderness and do your thing, you might find our Fallout 76 settlements guide handy.