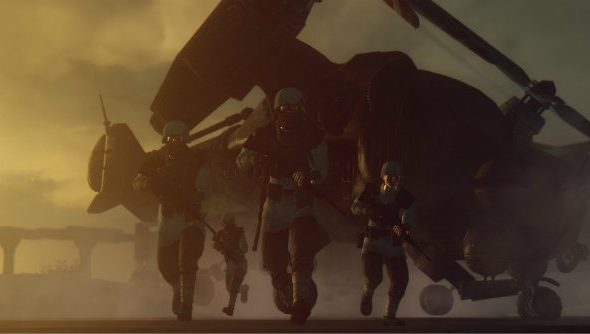 If Fallout 4 didn’t satiate those RPG cravings and had you longing for a return to Obsidian-developed Fallout, there’s a Fallout: New Vegas mod coming this summer that’s just for you.

Which Fallout do you reckon features in our list of PC’s best RPGs?

Fallout: The Frontier is a massive undertaking created by a large team featuring four writers, five coders, a handful of 3D modelers, texture artists and even voice actors – and that’s just the core. Some fully-fledged indie games have smaller teams.

It took a lot of people to make for a reason. The mod takes you to a whole new location in the Washington wastelands – a frozen expanse of ice and mountains, dotted with the odd camp.

Here you’ll have to cope with the elements in the form of the mod’s all-new weather system, equipping different gear to protect against different conditions. It’s made more believable by new visual effects too, like cold breath, footprints in the snow, spreading fire and mist.

It’s in this setting where you have to search for a secret that’s being hunted down by Legion and the NCR. There will be drive-able tanks, aerial dogfights, new creatures, new missions and even a section that takes you into space, complete will low gravity simulation.

The mod is due for release in the summer, and you can can keep up with developments on the official site. You will need Fallout: New Vegas and all of its DLC to enable it.