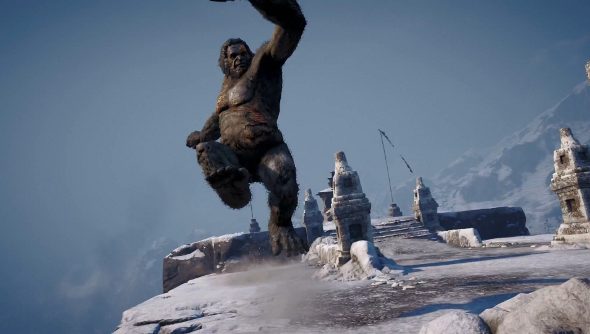 Far Cry 4, despite being competently made and, importantly, rather fun, was just too much like its predecessor for me. In a series where each installment stood apart from the others, it just seemed a bit safe.

Valley of the Yetis might make me change my tune.

Here’s the deal: our beige protagonist Ajay has been in a nasty accident. His helicopter crashed somewhere in the Himalayas, and he’s alone in the wilderness, surrounded by a murderous, gun-toting cult. And yetis.

What makes Valley of the Yetis a wee bit different from the core game is that its structured around constructing and defending Ajay’s base. He’s got to capture and protect this camp, upgrading and fortifying it during the day, and defending it against monstrous and human attackers during the night.

There’s a hint of open world survival amid the base defense elements. The whole thing seems to be wrapped up in this desperate bid for survival, as Ajay holds out until help comes, and that’s a goal that’s infinitely more interesting than cleaning icons off a map.

Valley of Yetis is part of the season pass, but it can be purchased separately. The release date is March 10th.