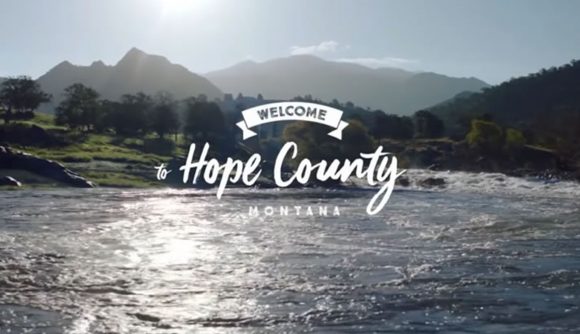 Hope County, Montana is not a real place. But the fictional setting of Far Cry 5 (you can read our Far Cry 5 review here) is now part of a tourism promotion with Southwest Montana. Apparently the militant cultists and nuclear apocalypses of the game and its New Dawn spin-off weren’t an issue for the state, which has partnered with Ubisoft to encourage tourists to see Montana for themselves.

You won’t find the pastel post-apocalypse of Far Cry: New Dawn mentioned on the Visit Hope County site – in fact, you won’t find much direct mention of the game at all, outside a brief summary on the FAQ page. It is an official partnership with Ubisoft, but the breakdown of why Far Cry 5 is set in Montana is about the only direct crossover.

“The Far Cry franchise is about frontiers, and for Far Cry 5 the team wanted a place that was beautiful but also that felt remote. After making a short list of potential locations, the team got on a plane and headed to Montana.

“Once they started to meet the people, to hear its history and to go fishing and hunting, the team realized they got it right on the first shot. Far Cry was going to Montana.”

It’s not dissimilar to Fallout 76’s partnership with the West Virginia tourist board, though that game at least had the benefit of sending people to real landmarks like Camden Park.

Take aim: Check out the best first-person shooters on PC

Though perhaps in both cases it’s best that we don’t too closely associate our gaming guns with real-world locations. And the Montana landscapes sure do look pretty, both in Far Cry and real life.