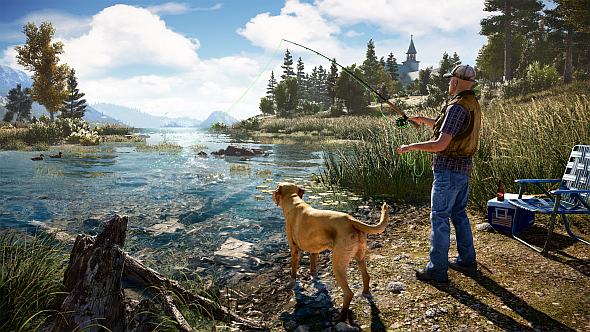 Far Cry 5 has already been a hit, and today Ubisoft are proud to boast exactly how big it is. It’s the fastest-selling game in the history of series, and the publishers’ second biggest ever game launch, topped only by The Division. In one week, Far Cry 5 has generated $310 million in “consumer spending,” presumably counting both sales of the base game and DLC.

Scan for the next hit with our list of exciting upcoming PC games.

Over half of Far Cry 5’s sales occurred through digital distribution, and the game’s also boasting strong social media numbers, with 55,000 hours viewed on Twitch and 117 million views on YouTube – and both of those are week one records for Ubisoft.

The full infographic has plenty more fun stats, including over 8,000 skunk ambushes, 35 million sticks of dynamite thrown, and 98 fake brands made for the game. Good boy Boomer is obviously the most popular fang for hire, and apparently the fishing minigame was approved by real fishermen. Whether that means pros or somebody’s uncle is unclear.

The figures come via GfK Chart-Track, who capture all physical and web sales that use EPoS systems.According to them, Far Cry 5 is the biggest release of the year so far. It is also the best-selling game ever to launch in the thirteenth week of a year, surpassing BioShock Infinite, which launched in the same week in 2013.

Early indicators on Steam (see original story, below) suggested Ubisoft’s latest shooter was on track to be a big hit, so it’s not exactly a shock, but these figures now confirm it.

Original story March 29, 2018: Far Cry 5 is on course to be a big hit for publishers Ubisoft – at least, according to early indicators on Steam.

We’re less than 48 hours from the game’s launch, when numbers tend to be highest, and its concurrent users to date have peaked at a muscular 83,046, with roughly 279,799 total owners estimated (according to the Steam Charts and SteamSpy). User reviews are positive too, at 80%.

For context, that’s better than any other Ubisoft game apart from The Division, which peaked at 113,877 players (not all that much more than Far Cry 5, given that it was aiming to take on Destiny). Other recent Ubisoft big hitters have struggled to break 46,000, with Ghost Recon: Wildlands, For Honor, and Assassin’s Creed Origins all coming close without achieving the proverbial cigar.

Consider the Far Cry series, and number 5’s launch looks even better – its previous record was set by Far Cry 3 with a peak of 23,042 players. Far Cry 5 has more than tripled that.