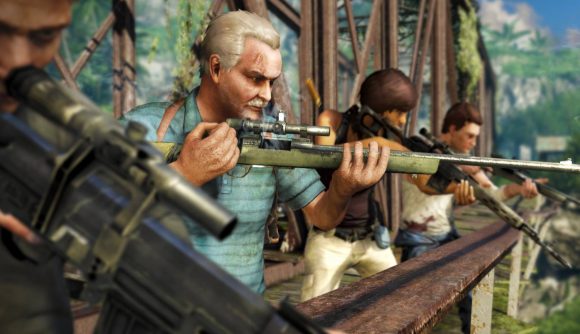 Two Twitter users have spotted a page on the Hong Kong PlayStation Store showing initial information about the game. According to the listing, Far Cry 6 will launch on February 18, 2021 for both PlayStation 4 and PlayStation 5. No PC version has yet been confirmed, but recent entries in the series have all been multiplatform, as is likely the case with this one.

The listing states Far Cry 6 is set on “Yara, a tropical paradise frozen in time”. It continues: “As the dictator of Yara, Anton Castillo is intent on restoring his nation back to its former glory by any means, with his son, Diego, following in his bloody footsteps. Their ruthless oppression has ignited a revolution.” The listing also confirms some sort of two-person online multiplayer mode – previous games in the series have included two-player co-op, so it's possible that option will return in Far Cry 6.

Finally, it says owners of the PS4 version will receive a free upgrade to the PS5 edition when this becomes available, and that pre-order customers can claim a “state-of-the-art Discos Locos weapon and a skin for Chorizo”, though it’s unclear who this refers to.

18th February 2021 apparently. No word from Ubisoft on confirmation yet. pic.twitter.com/ab1ZfLLlTl

It was recently rumoured that Breaking Bad’s Giancarlo Esposito would star in the new Far Cry after he said he will soon be appearing in a “huge” videogame. This new leak appears to confirm that, judging by the likeness of the man in the game’s thumbnail, who’s likely to be the aforementioned Castillo.

We’ll likely hear more about Far Cry 6 during Ubisoft Forward, the company’s E3-style presentation, on Sunday, July 12. For more, check out our Far Cry 6 release date guide. Bring it on!