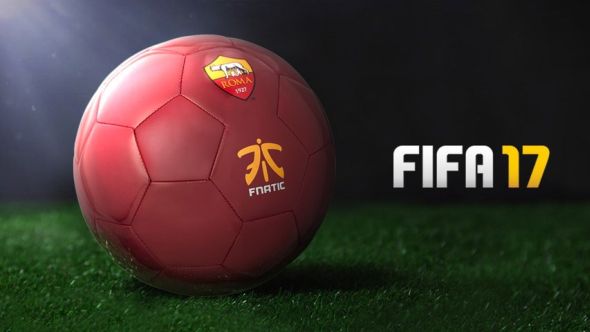 Fnatic, a leading eSports group, have partnered with the Italian football club AS Roma to provide them a team for FIFA’s emerging eSports scene.

Do you like your sports traditional? Is running on walls a little too off-the-wall for you? Get a more grounded experience with the best PC simulation games.

According to Fnatic’s announcement, Roma’s FIFA team will be “powered” by them – meaning they will manage the team and offer support for training, events and eSports knowledge. The team will represent Roma and compete in their famous yellow-and-red colours. Their roster includes Sam ‘Poacher’ Carmody, Aman ‘Aman’ Seddiqi and Nicoló ‘Insa’ Mirra, with manager Colin Johnson.

“FIFA’s entry into the world of eSports has received the attention of many organisations both from established football clubs and esports organisations,” says Wouter Sleijffers, CEO of Fnatic. “Fnatic is excited to enter this rising esports game with AS Roma, one of the most iconic clubs in football with a long and successful history.”

“As one of the most digitally-connected sports teams in the world, we’ve strived to create an organisation at Roma that engages our fans through all digital channels,” says Jim Pallotta, president of AS Roma. “With the tremendous growth of eSports and continued attention placed on games like FIFA, we’ve partnered with Fnatic, the world’s leading eSports organisation, to launch our eSports team. This joint venture will enable us to start building a strong legacy in eSports and engage our fans in exciting new ways.”

Fnatic are one of the world’s most successful eSports outfits, fielding leading teams in such games as League of Legends, Dota 2, Overwatch, and CS:GO, where they’ve won three majors. AS Roma are currently second in Serie A, the highest division in Italy’s football league system, though they’ve only won it three times in their 90-year history, most recently in 2000-01.

The move is just the latest of several investments in eSports by big names in the traditional world, with FC Copenhagen buying Dignitas’s former CS:GO team and the NBA’s Miami Heat investing in Misfits.