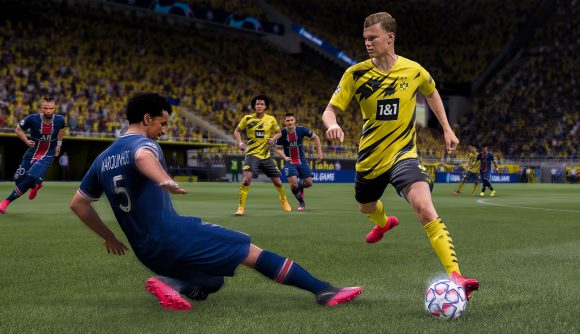 This week, EA posted a set of patch notes revealing what’s in store for FIFA 21 in its upcoming Title Update 5. Among the chunky list of changes, there’s a new feature called ‘FIFA Playtime’ – a “new suite of tools that enable players to have more control and visibility over how they play”. It’s not entirely clear from the notes’ description what these are or how they work exactly, but it’s now confirmed they’ll allow players to keep track of and set limits on spending for the football game.

As Eurogamer reports, FIFA Playtime – which the notes say can be accessed “through the main menu, FUT, and Volta Football” – is a tool designed to let players, and parents of players, have more control over some of the game’s different aspects.

For example, the feature will let you get better visibility and control over things like the time spent playing the game, and set limits on how many matches you want to get stuck into, as well as how many FIFA Points you want to purchase in the in-game store and FUT packs you want to open (whether using FUT Coins or bought with FIFA Points).

Additionally, FIFA Playtime is designed to help give players more control over aspects such as social communication and access to games based on their rage rating.

It doesn’t appear that the suite of tools will let you keep track of how much you’ve spent in terms of real-world currency, but it seems any FIFA Points purchased outside of the game’s own store will still count towards any limit you’ve set – you just won’t see a notification about this until you hop back into the game itself.

Eurogamer reports the feature will go live in-game for PC players today (November 12), and will then become available for console players next week, on November 17.