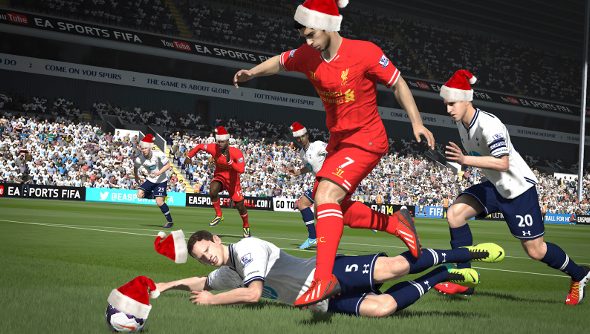 One needs little more evidence that Christmas is a bleak time in the UK than the video game sales charts. What’s this year’s Christmas number one? It’s the men in shorts ball kicking simulator FIFA 14, closely followed by annual army men shooter Call of Duty: Ghosts, the franchise which normally takes the number one spot.

Over the last four years, Call of Duty has dominated the charts, only briefly being knocked off the top spot by The Elder Scrolls V: Skyrim, which at least has a ton of snow and bearded men that look a little bit like Santa.

What are you going to be playing this Christmas? I’m struggling through Batman: Arkham Origins and about to embark on an adventure through The Stanley Parable, filling my quota for both hasty cash-ins and confusing cerebral fare.