You know that bit in an action movie where the hero is brawling with a gang and ducks a punch, causing one assailant to knock one of their allies out? Fights in Tight Spaces lets you do this and other similarly John Wick acts of graceful violence through the medium of a deck building turn-based tactics game. It’s a simple idea, executed perfectly.

You start with a basic deck of cards representing actions like blocking, attacking, and manoeuvring, enter a tiny level with several goons, and set to work battering them one by one in turn-based combat. Attack cards range from quick jabs and kicks to more elaborate moves like a wall-running kick, blocking is mostly about armouring up and adding counter damage, and manoeuvres help you maintain range and escape damage. Like in any card game, every card has an associated cost – dictated by Momentum rather than mana here – but because you start almost every turn in range of an enemy attack (or several) your priority is ending up in a safe and advantageous position rather than dishing out punishment.

Controlling the space is easy when you’re facing off against basic grunts who can only throw a tame, short-range punch: a push-kick or simple step will do the trick. However, in later levels you find yourself up against bodyguards with pistols who are working to set up crossfires, thugs who can push you a tile back, and bruisers whose punches sweep across every tile in front of them. Even at full health you’re only ever three or four unblocked attacks away from death, and with very few ways to heal your goal is always to make it to the next turn unscathed.

Fortunately, there are a ton of ways to turn a bad situation into a good one. You can shove enemies, kick them left or right, tackle them to the ground, suplex them, and drag them in front of you. Sometimes, the best use of a turn is to simply slip out of the way and watch on as your assailants beat each other to death. Nearly every turn starts with you facing a seemingly fatal barrage of attacks with no movement cards that can carry you to safety. However, there’s almost always a route out, whether that’s by blocking damage, moving your enemies around, or dishing out so much pain that you end up with one less incoming attack to survive. Oh, and if you manage to push an enemy out of the arena they’ll die instantly, which is a great equaliser for particularly sticky situations. 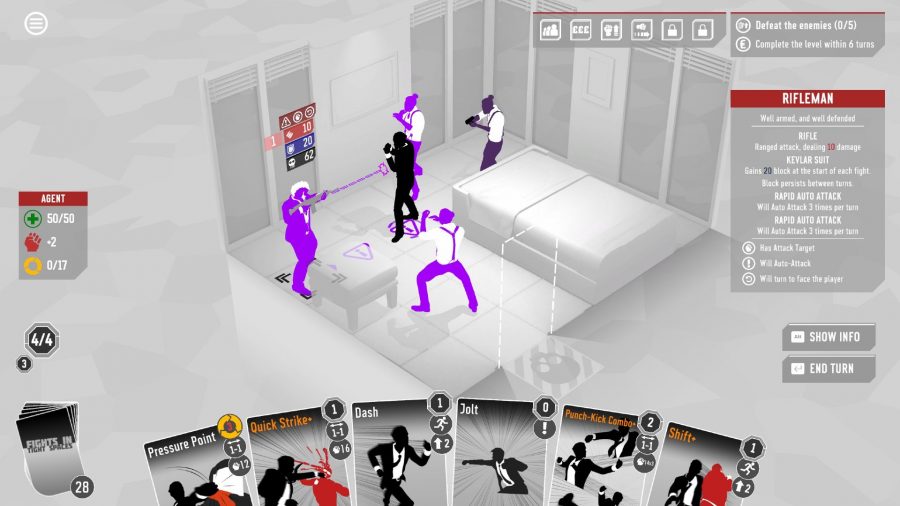 Deck building is where Fights in Tight Spaces loses me, and that’s largely because there’s not enough cash to really experiment with tuning your deck. As you fight through each chapter you pick up new cards and earn cash that you can spend on new cards, upgrading cards, and removing cards from your deck. Upgrading cards can sometimes double their damage, which is essential in later chapters, while removing a card at roughly the same cost never feels like a worthwhile investment. You can unlock different starting decks by reaching new milestones, letting you try out a counter-blocking or aggressive play style, but with no way to customise a deck before starting a new game there’s not much scope for experimentation here either.

Still, I find myself hopelessly addicted to Fights in Tight Spaces – I’m 20 hours deep and only just starting to crack the final chapter. Despite how tiny every arena is, each one is stuffed with choices you can pore over until you’ve exhausted every possible outcome. It’s a strategy game where you’re constantly on the backfoot, which makes it all the more satisfying when you beat the odds and finish the fight with a stylish roundhouse kick.

Fights in Tight Spaces has just released in Early Access on Steam, so if you’re curious you can check it out here.