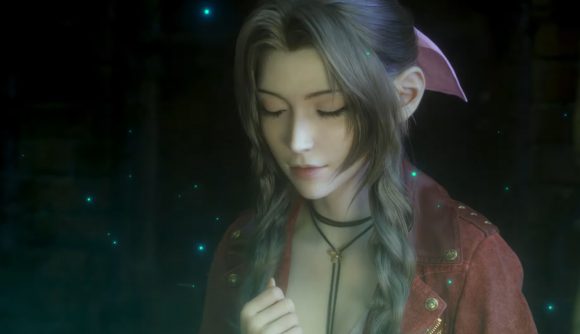 After a lengthy disappearance from the public eye, Square Enix showed off a brand-new trailer for the Final Fantasy VII remake during PlayStation’s State of Play stream this afternoon. It shows us a whole lot of new stuff, including much closer looks at much of the game’s core cast, and some quick glimpses of combat and other bits of general gameplay.

Folks like Cloud, Aerith, and Barret all play prominent roles in the trailer, and there’s even a fair amount of English voice acting on display – which might give us some hope that the release isn’t too far off. The combat looks to be pretty similar to the action-oriented battles of Final Fantasy XV, though it looks like you’ll have much more prominent control over multiple party members.

The trailer ends the only way an FF7 teaser can – with a quick hint of Sepiroth’s appearance. The video promises “more to come in June,” which likely means we’ll get a much better look at the FF7 remake at E3 – which, incidentally, Sony will not be attending.

So far, the new FF7 has only been confirmed for PlayStation 4, and it remains to be seen whether it will come to other platforms. Like most third-party publishers, Square Enix has been increasingly focused on multi-platform releases, and with Sony out of E3, that would be the time to announce which – if any – non-PlayStation platforms the game will come to.

Check out the trailer for yourself above.

In a Twitter message from the official account, Tetsuya Nomura says “most of the plans are already in place in the run up to launch, so please bear with us a little longer until we can release more information next month.”