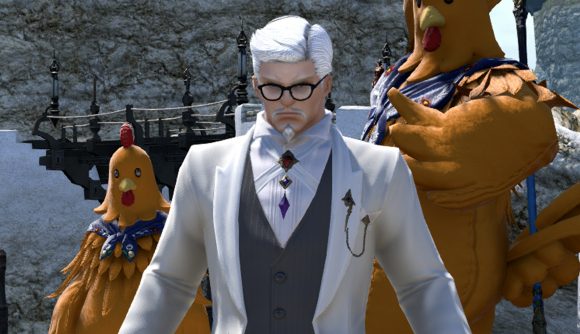 A couple of Final Fantasy XIV fans are dressing up as a giant chicken and Colonel Sanders in order to photobomb players, run amok, and offer people KFC’s delicious $5 fill-up box. This is why MMOs need to exist.

The main face behind these shenanigans is Reddit user _Vard_, who posts the various exploits of his FFXIV version of Colonel Sanders and the giant chicken man. Usually these two can’t be seen in the same place at the same time, but when they do the inevitable often happens.

We’ve seen some truly creative players getting into all sorts of hijinks in Final Fantasy XIV – such as the fan who dressed up as Todd Howard and handed out faded copies of Oblivion at a convention – and it’s always fun when something like this turns up, especially when they use FFXIV’s emotes to their advantage. Witness this amazing moment for example, where the giant chicken glitches into a wall and is thrown out as their arch-nemesis.

The game’s amusing character-spinning emote is made even more amusing when there’s a giant chicken cooking slowly over a fire, and they’ve even managed to photobomb other players with the same emote – as you can see below. _Vard_ happily buys into other characters asking the Colonel for chicken, too, going so far as to offer them a full KFC fill-up meal.

Got reminded of that one time i left myself spinning AFK, and i accidentally photo bombed some guy on twitter, my friend messaged me the next day "Was this you?" from ffxiv

If you’re lucky, you’ll see either Colonel Sanders or the giant chicken fighting somewhere in one of Eorzea’s major cities. We’re sure this won’t the last crazy stunt an FFXIV player pulls either – even if it’s as simple as eating 138,000 eggs in a single stream – and there’s sure to be an influx of players as we approach the release date of the Endwalker expansion next month.