With Final Fantasy XIV currently in its strongest position ever after two triumphant expansions, the days of its troubled launch are but a distant memory. This is no longer a story of an epic recovery, but one of building on its enviable position. The MMORPG’s third expansion, Shadowbringers, is that next big step – one which aims to kick off a massive new chapter in the game while sustaining its momentum.

How does Shadowbringers hope to do that? Well, by adding lots more stuff. It boasts the lengthy list of new features that we’ve come to expect from an MMO expansion. New jobs, new dungeons, new raids, and an entirely new storyline to play through. The additions are robust, to say the least, but the opportunity to wield the ludicrously improbable gunblade is chief among them.

The new Gunbreaker job is Final Fantasy XIV’s latest tank – a frontline fighter whose role is to protect allies and brush off the punishment of foes. The role makes a good fist of letting you live out your Squall Leonhart roleplaying fantasies, too. It’s a flashy and explosive job that has you completing ability combinations to load a cartridge into the gunblade, which can then be used to fire off a quick single-target or area-of-effect blast. You can also start a rapid volley of chain attacks – a bit like Squall’s Renzokuken limit break – while weaving in continuation moves for a huge damage combo. It’s a satisfying, aggressive gameplay loop.

On the defensive side, you get a cool self-heal that grants a temporary barrier, which you can share to give other party members some protection. Overall, though, long-term tank players won’t find too much that drastically changes the way they play. Still, it’s an exciting addition to the game, especially when the gunblade has been such an iconic part of Final Fantasy’s history. 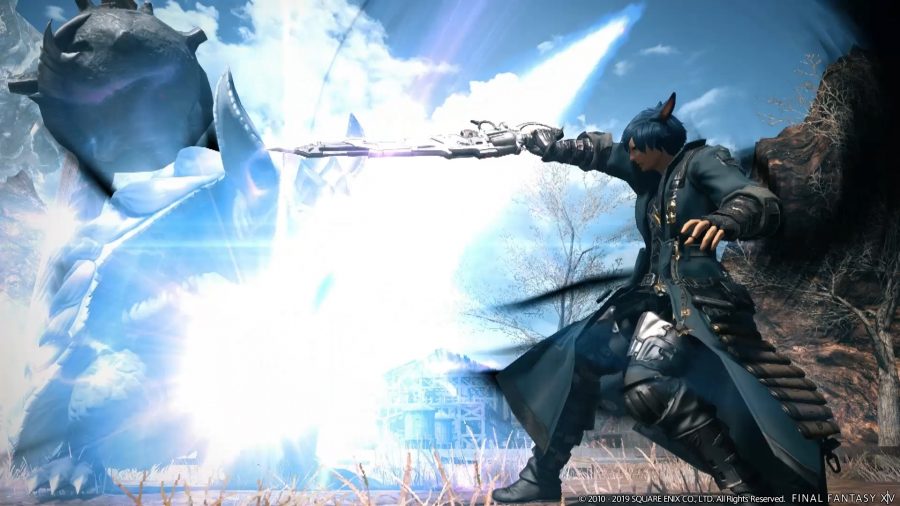 Though many expected the second job in Shadowbringers to be a healer, Dancer will instead join Bard and Machinist as the MMO’s third ranged DPS class. Even so, the job takes on more of a support role during group events, in that you’re able to buff, empower, and protect party members. It’s smartly designed and more mechanically interesting than Gunbreaker, mostly because of the rhythm action mini-game you get to play when bopping.

Once activated, four of your hotbar skills change into dance moves indicated by differing colours. You need to perform them in order according to on-screen prompts, much like Rock Band or Dance Dance Revolution. Hammer out that combo and hit your finishing move, and you’ll blast all surrounding enemies with a burst of damage while also putting yourself in a state called ‘Espirit’. This enables you to earn a resource to unleash further attacks. The challenge, then, is in maintaining this buff by busting some moves so you can continue pumping out damage from the backlines.

If you’re not quite seeing the support side of the role, you can share the Espirit status with a party member by assigning them as your dance partner, thus buffing their damage. When they land blows, they in turn will earn you further resources to spend on your bonus attacks, or you can apply yet more buffs to them. 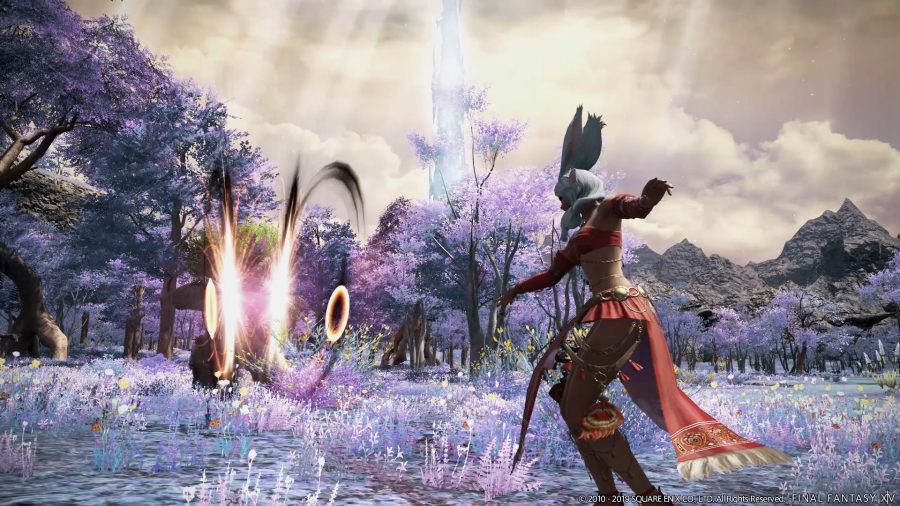 It’s a cute idea that adds another, nicely themed layer to playing the class, and it would have been interesting to see more commitment to this aspect of the Dancer job. Perhaps further ways to vary the buffs you can apply to allies – similar to the Astrologian’s card system – could have offered advanced players something more intricate to master. As it is, Dancer is still primarily a damage dealing role with some impressive area-of-effect abilities.

All characters in our hands-on session are either of the two new races: Hrothgar or Viera. The former looks a lot better in action compared to the short preview video released at FanFest, and it’s easy to envision many switching to the latter as an alternative to the cutesy cat-like Miqo'te.

Shadowbringers adds an entirely new world to explore called The First. Final Fantasy XIV has always astounded with its environmental design, and Shadowbringers doesn’t falter here. It’s fully on show in one of the expansion’s new dungeons, Dohn Mheg – a mysterious space that segues from floral gardens, to dense forest, to a decorative palace. Amid the standard trash mobs are a handful of boss fights that will test even long-time players on their first attempts, and mechanics that mix in new ideas to show how the dungeon team is still keeping things fresh.

The most interesting part of our Dohn Mheg run, though, was using the new NPC Trust System. It’s undoubtedly a cool idea, theoretically offering solo players a way to tackle dungeons alongside familiar characters under AI control. At the same time, it’s a risky proposition, as it also encourages players to be less social in a giant MMO world where, well, they’re supposed to be surrounded by real people. 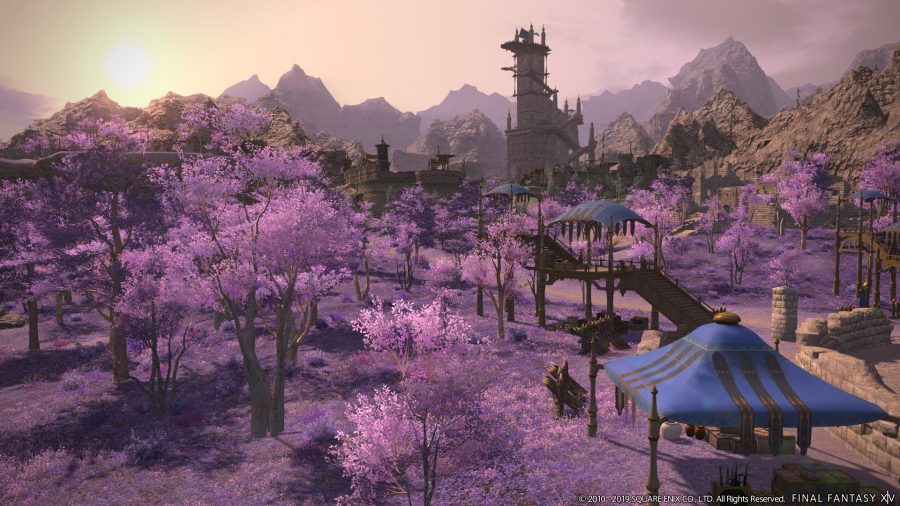 In practice, it’s a mixed bag. AI NPCs get a lot more to say and do than you might think, with the likes of Thancred and Minfilia bantering between each other as we progress, and barking during combat or after defeating enemies. In that sense, it’s pretty cool, giving the characters of the main scenario more of a connection to your adventures than before.

And yet, obviously, you’re taking a chance by putting your faith in the AI over the brain of another human. And while it can be surprisingly good at basic tasks such as tanking and healing, it does falter when it comes to some fight mechanics. In Dohn Mheg, for example, one boss releases spores when you reach him, which you’re required to block. One player must stand in front of each, but the AI’s decision-making can cause confusion and some punishing mistakes.

Shadowbringers brings with it a thorough rebalancing of healer jobs, allowing players to commit to a purer version of the role and feel less pressure to DPS during every break. The option hasn’t been removed, per se, but instead, ability gaps in the respective healer jobs have been patched up to make them equally capable. 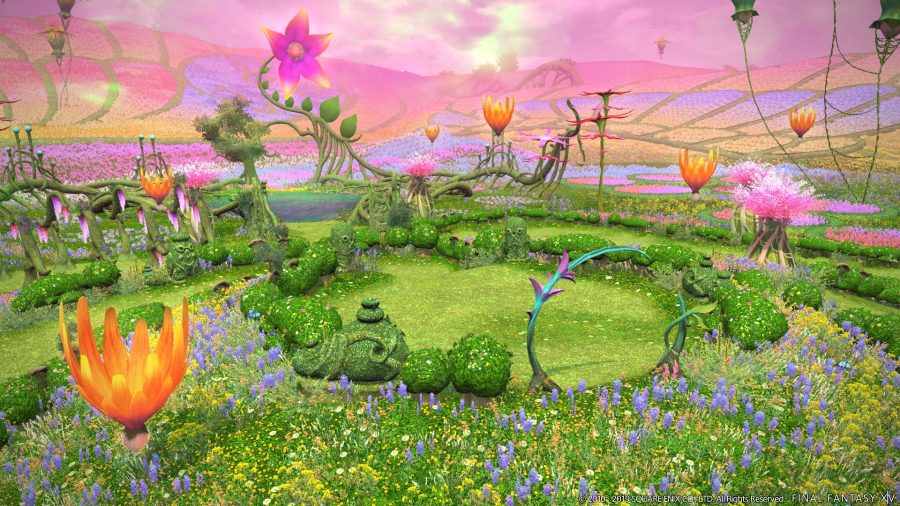 Essentially, there’s been a huge push for refinement, as is often the case when MMOs start to get bloated with big numbers and burgeoning spellbooks. All are in service to making a smoother, cleaner and more intuitive game, so while it’s easy to mourn the loss of some customisation options in an area such as role actions, it’s better than an overwhelming number of options, many of which are useless. A more clearly defined interrupt system for specific enemy attacks also makes for a much more readable and responsive combat system, in which you don’t waste stun and silence effects.

Read more: Waiting for the FFXIV Shadowbringers release date? Here’s everything we know

These all feel like very sensible decisions for a game that’s creeping up in age, though still feels as fresh as it did at relaunch, and as inventive as it did throughout Heavensward and Stormblood. Shadowbringers showed that there’s still plenty to look forward to for now, and for further ahead in the future of Final Fantasy XIV.