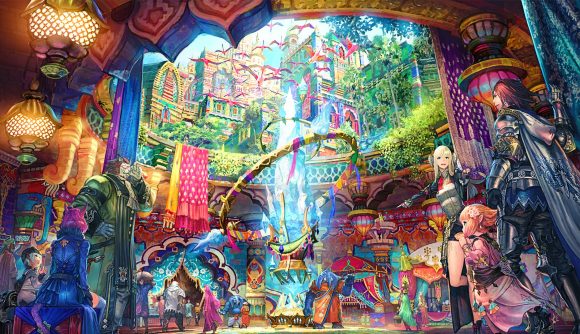 Over the past week, news of Russia’s ongoing invasion of Ukraine has dominated the global headlines. The situation is rapidly changing and details continue to be shaky, though plenty of people are fearful of the ramifications of the conflict. The war has also touched our industry, with various Ukrainian game developers taking to various social media platforms to ask fans for help. Now, though, players are taking to their favourite games to show solidarity with Ukraine, and Final Fantasy XIV is no exception.

Over the past couple of days, we’ve seen demonstrations on Lich, Shiva, Aether, and other servers. The gatherings all follow a similar theme, with people flocking to one of FFXIV’s social hubs while wearing clothing that’s dyed blue and yellow to match the Ukrainian flag.

The gatherings follow an online show of support for an FFXIV streamer called Jessica ‘Zepla’ St. John. The content creator caught the media’s attention in January when she uploaded a video updating her audience about the situation in Ukraine and how she might have to move. Following the video, she initially moved to the west of Ukraine from Kyiv before updating everyone on Twitter that she managed to make it to Poland.

Here are some pictures from the pro-Ukraine demonstrations in FFXIV:

Even people in #FFXIV #FinalFantasyXIV are giving their love and support for #Ukraine pic.twitter.com/4gyAbEIMQT

Russia’s military invasion of Ukraine has touched other entertainment areas, too. Over the weekend, Russian tennis pro Andrey Rublev wrote “no war please” on one camera following a match in the Dubai Tennis Championships. Various Premier League football teams were also allowed to show solidarity with Ukraine following a ruling from the Football Association.

If you would like to support Ukraine yourself, you can donate to UNICEF, Doctors Without Borders, and Voices of Children at those links.