Puns can be wonderful tools to spread humour and good cheer throughout the world, and I’ll hear nothing to the contrary. No, stop your groaning, because now puns are being used to save lives. At least, that’s how I interpret the Final Fantasy XIV Stormblood drive.

We say Final Fantasy XIV is one of the best MMOs on PC, and we said it before it started saving actual lives.

You see, the last expansion was called Stormblood, and now the developers have sponsored a blood drive and called it the Stormblood drive. Good stuff, right? Well, at the very least it’s good that the American Red Cross collected over 400 pints of blood in an FFXIV-themed bloodmobile. Yes, they actually call it a bloodmobile.

Alsovery good is this image of FFXIV director Naoki Yoshida presenting a novelty cheque for $50,000 to the Red Cross (I assume a real check was presented later). 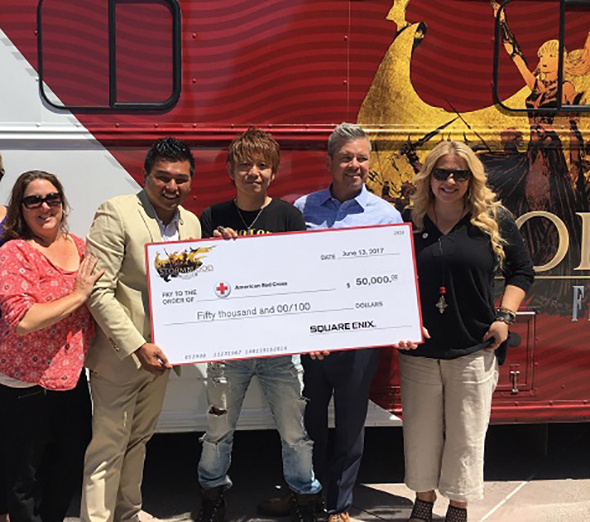 The Stormblood drive is over, but you don’t need to participate in a branded event to donate and help save lives. It’s easy, painless, and a very good deed. Check in with your local health organisations and do it.

Final Fantasy XIV itself is in store for some big updates, with the mind behind Final Fantasy Tactics back under Square Enix auspices in order to write a portion of the game’s Return to Ivalice. Also, if you haven’t seen it yet, that Dad of Light series which just hit Netflix is delightfully bizarre.