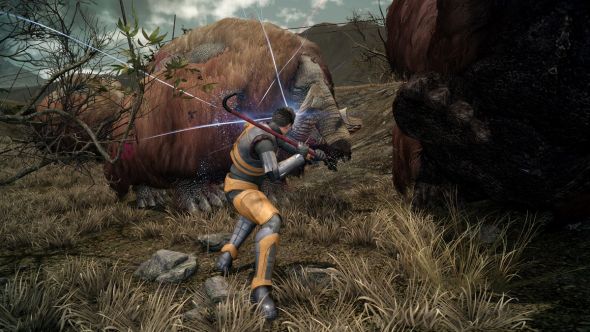 Finally, a new game where you can play in an orange and black armour suit with a Lamda symbol while wielding a crowbar. Sadly (obviously) this is not Half-Life 3, but Final Fantasy XV.

Here’s everything we know about Final Fantasy XV on PC.

For some reason, the wise folk at Valve and Square Enix have decided that Final Fantasy’s vibrant open-world would benefit from having a player-character who looks similar to, but not exactly like, Half-Life’s Gordon Freeman. The Final Fantasy XV Half Life Pack, which was announced this afternoon, contains an HEV Suit, Scientists Glasses, and, most crucially of all, a Crowbar that you can use as an in-game weapon.

A FREE PLAYABLE DEMO for #FFXV Windows Edition is coming next week (26th Feb)!
If you pre-purchase/purchase FFXV Windows Edition on @steam_games before 1st May you can also claim the Half-Life Pack via Steam Workshop!
https://t.co/ZRNh69BOQM pic.twitter.com/I9BsXzl7d5

Final Fantasy XV releases on PC on March 6, and includes the following all-new features for the Windows Edition: