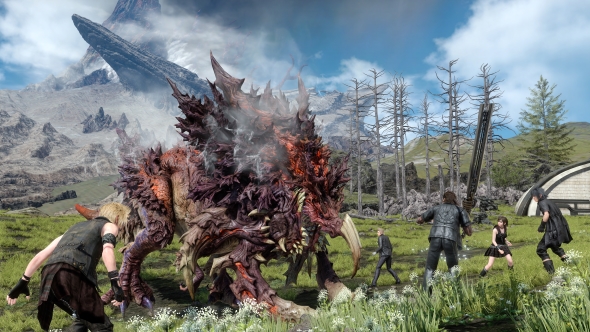 Final Fantasy XV is absolutely coming to PC. While we always thought it would, Square Enix have now confirmed that a super-powered version of the console JRPG will arrive on PC in 2018. The original had a lengthy and turbulent development process but was well received when it finally released. It has also gone on to be updated with several bold DLC packs that have transformed it from an interesting Final Fantasy title into a wonderfully strange online multiplayer game.

Maybe, if it’s good, Final Fantasy XV could bolster our list of the best RPGs on PC.

We’ll be getting all that and more on PC, so it’s certainly something you should have on your radar. Need to know more? Here’s everything we know about Final Fantasy XV Windows Edition (yup, that’s what they’re calling it). 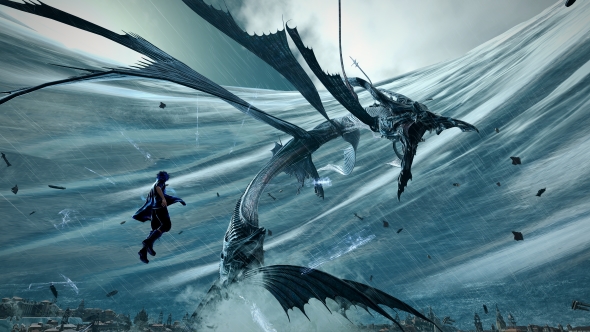 Final Fantasy XV will release for PC on March 6, 2018. That’s only (counts on fingers) more than 16 months since the console version launched. Better late than never, eh?

Square Enix have never been secretive about the fact that the port would be a lengthy process, though. Back in July 2016, the game’s co-director Hajime Tabata told Spanish website Vida Extra that “if we worked on a PC version what I have very clear is that we would work to provide a better version of what we have now on consoles… We could say that something like this would take us more than a year. We should work to adapt the engine, which is very laborious, and from there to develop its course.”

Earlier in 2017 we saw a tech demo of the game running on two GTX 1080s in SLI, which was shown off at GDC. Square refused to confirm that this meant the game was headed to PC, but Tabata commented in June that “We want to share some good information at Gamescom.” Naturally, that good news turned out to be a PC confirmation, and an early 2018 release window.

You can add it to your wishlist on Steam now, should you be interested.

With the game coming to PC, it’s exciting to think of what Final Fantasy XV mods there could be. Game director Hajime Tabata has confirmed that the PC version will have mod support, something he’s hoped to include for a very long time.

“I think one of the biggest things [PC] players can expect is mod support,” he told Rock, Paper, Shotgun at Gamescom. “We definitely want to do it. We haven’t actually managed to get our full modding policy or discussions on that finished but at the moment we do really want to do it. We’ll have the full details around autumn time.”

Square Enix have yet to confirm if mod support will arrive at launch or sometime later, noting that development progress will determine this.

But what mods could we see? Incredible new costumes and vehicles seem a given. As do… well… nude mods. But how about new characters? I give it six months before someone’s crowbarred the entire Final Fantasy VII cast into it.

Ok, so you’ve either been waiting an incredibly long time for FFXV on PC, or you played it on console and are considering buying it again. What extras does the PC version have? Well, naturally, it looks a hell of a lot prettier. It’ll run in both native 4K and 8K with HDR10, which is enough to make your Xbox One X or PS4 Pro erupt into pillars of blue flame. But the PC version also has several new graphic technologies bolted onto it, courtesy of Nvidia.

Nvidia Flow adds dynamic and combustible fluid, fire, and smoke, while HairWorks makes the games’ characters’ already amazing barnets look dynamic and life-like, and also spruces up any furry animals and monsters, too. ShadowWorks enables characters to cast shadows on themselves for a truer lighting simulation, and Turf Effects makes grass and plants look much more realistic. Finally, XVAO adds depth and realism based on the physics principles of shadows and light. In short, it’s monumentally pretty with all these switched on.

With all the Nvidia tech installed, it’ll come of no surprise to find that Final Fantasy XV also integrates with the GeForce Experience software to allow Ansel in-game 360-degree photos. It also uses ShadowPlay Highlights to automatically capture your coolest moments – Prompto has some competition. 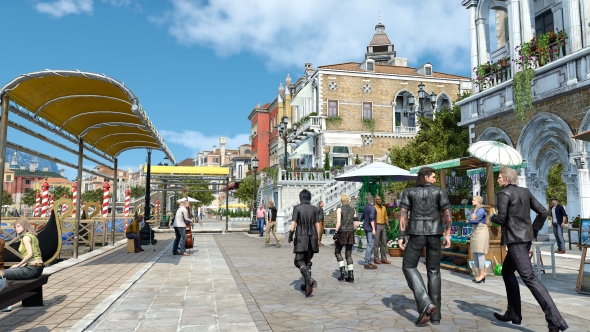 The PC version of FFXV will come with a “wealth of bonus content,” which is confirmed to include all of the content contained in free updates for the console versions as well as the paid-for Season Pass DLC. The whole of Final Fantasy XV will be included in the Windows Version, with no need to buy anything more (unless new DLC is released post-launch, of course).

That means the PC version will include all of the Final Fantasy XV Episodes – three short story chapters which each focus on one of your party members. Gladiolus, Ignis, and Prompto all get to be the stars of their own show with this, and there’s even a decent bit of variety: Prompto’s chapter, for example, plays a bit like a shooter, while Ignis’ has some grapple hook parkour action.

Then there’s the Comrades expansion pack, which introduces online co-op multiplayer. This allows you and some friends to band together as a Final Fantasy party and head into the open world of Eos. It’s by far and away the most experimental a single-player Final Fantasy game feature has ever been, and from what we’ve seen it’s actually looking pretty good.

Final Fantasy games are third-person RPGs and FFXV is no exception. The PC launch will change this, however, as Square Enix will add a first-person mode to the game. “Players can also explore the world of Eos through Noctis’s eyes in an all-new first-person mode” says the game’s Steam page. Quite how this will work with the ludicrously rapid combat system remains to be seen, but it’s an exciting new addition.

Can you run it? Check your PC against the Final Fantasy XV system requirements 2021 on PCGameBenchmark.

That’s everything we know so far about Final Fantasy XV’s PC release. We’ll update this as new information is made available, be that through Chocobo deliveries or the summoning or giant beasts with system requirements tattooed on their scales.