Reborn is the right word. Final Fantasy XIV has always been a difficult game; an MMO built for Final Fantasy fans and players, it was roundly kicked in the face by both critics and its community before being taken offline late last year. Square Enix promised to have a second try.

That second try is currently in development, but available to play via a heavily NDA’d beta. I’ve been playing the game during the beta, and at various events, and am happy to say there are good things coming. Final Fantasy XIV is getting better: much better. Here are some highlights from last weekend’s phase two beta.

All of the races now have both male and female options (giant and human races used to be men only, while cats were ladies), and it’s encouraging to see such trivial restrictions lifted. The swaggering, roguish tomcats are quite appealing, and a popular choice among beta testers; the elfish Elezen less so. God no. Those long necks are all too Slender. 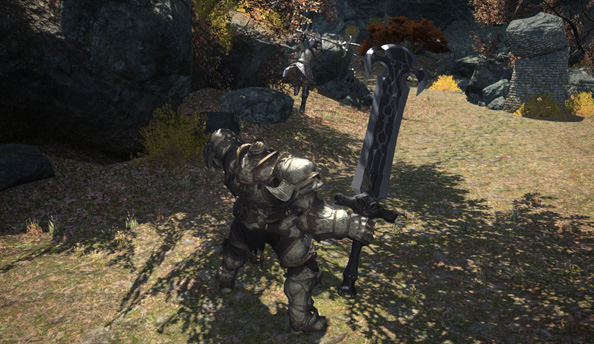 And you want to explore this new world

My new life in Eorzea started off pretty much as expected. Initial story quests were typically MMO, gently introducing you the world, guilds, shops, combat, character progression and – most important of all – emoting. Story specific cutscenes were left out of the beta, but the boss fights I experienced were exciting, often siding you with AI allies. Even during these scripted team ups, you can play however you choose (ie. tank, healer, Leroy). Killing started, as it so often does, with tiny squirrels and ladybugs, but swiftly progressed up the ranks to giant treants and golems. One thing that surprised me was how diverse the bestiary is: apart from two identical birds types, the majority of monsters were unique and incredibly detailed. It already feels like a place you want to explore. 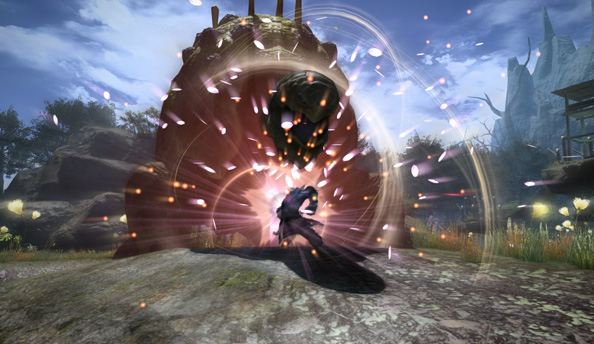 Chain kills are still present from vanilla FFXIV – meaning the more foes you down within a time limit, the more bonus EXP you’ll accrue. New to A Realm Reborn are FATEs (Full Active Time Events): public quests that pop up while you’re out and about, offering tiered rewards depending on your contribution to the battle. They’re a neat way to break up the monotony of grinding, and it’s pretty exhilarating to see players dive in when one crops up. The ones I participated in mostly revolved around killing rampaging herds of dinosaurs (in the brilliantly titled mission ‘Clever Girls’) and murdering monkeys.

Delicious EXP can also be accrued through Levequests. Think of them as side missions that reap mega-rewards, commensurate with the difficulty level you set for them beforehand. Levequests come in different categories – fighting, crafting and factions – meaning you can take a more passive path if you wanted to.

Phase Two’s available classes were limited to magic-wielding Conjurers, offensive Lancers and the shooty Archers. I went down the Conjurer path; he/she is a healer that can also fire off offensive magic. In order to learn more spells, I had to sign up with the Conjurer’s Guild, and carry out story missions every time I achieved level 5, 10, 15, etc. The story-based touch made me feel I’d earned my offensive spells and really progressed as a character. 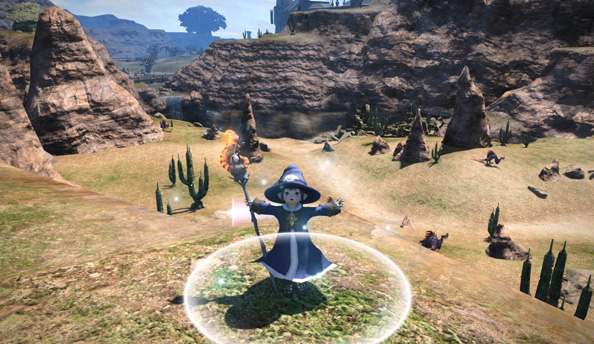 You can actually change your job class in FFXIV, meaning you no longer need to worry about getting bored of your character after spending hours in their chainmail boots. Once I reached level 15, I changed my job class to Gladiator – is that really a job? – and ran around gleefully stabbing monsters in the face. When I tired of the physical violence, I switched back to spellweaving by simply going through my Character menu. It’s a neat feature.

Now, I didn’t think I’d have much to say about what you wear, but clothing is a hot topic in world chat. Here’s why: subligars. Google them, just not at work. Final Fantasy XI veterans will know much of the subligar – ridiculous leather pants that were allegedly worn by Roman soldiers. They were very much in vogue during the beta period, much to the mirth of many participants who constantly squealed about their barely contained offal. It probably didn’t help that they were paired with leather harnesses on the upper body.

Final Fantasy’s clothing options are astonishing: they go from boob tubes and lacy panties (which, unbelievably, bestowed a higher defence stat than actual leather breeches) to hempen robes that resembled burlap sacks. There is no middle ground. Okay, the lacy look does suit the Mi’qote, but you cannot unsee a scantily clad Roegadyn giants, and the child-like Lalafells look downright wrong. It would be nice to see more clothing options that fill the void between Victoria’s Secret and potato carrier, if only to stop players shouting about how sexy they feel in their subligars.

Note that I can’t show you the worst offenders, as screenshots from the beta are strictly forbidden. These grabs were provided by Square Enix.

The crafting system in A Realm Reborn is quite an unusual beast. You can seemingly learn as many skills as you want at any one time. After visiting the relevant guilds on offer, I picked up the demented trio of leather making, botany and carpentry. But before gathering the necessary materials and getting stuck into making leather pants and wooden clogs, I needed to equip the right gear.

That’s right – I had to slip out of my armour and pick up my hobby’s necessary tool (a crafting knife, a hoe, a saw), each of which could be pre-loaded in Gear slots available through the Character menu. Once correctly dressed, synthesising was mapped to my hotbar with newer, item improving techniques unlocked as you level up. 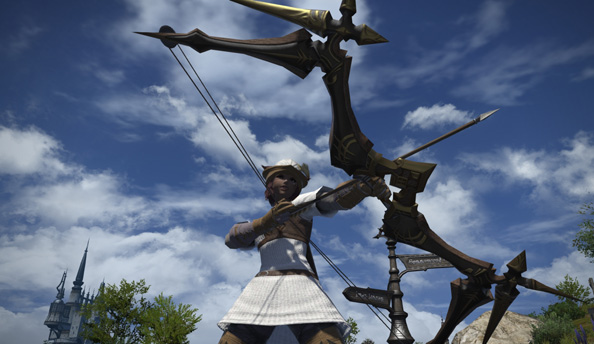 Changing outfits is a cute idea in theory, but in practise, most people can’t be arsed to spend precious monies on purchasing an entirely different outfit per talent, as evidenced by the amount of players sawing wood in the buff. There is a lot of nudity in this game.

Another minor niggle is that there’s no keybind option that allows you to quickly switch between gear sets. At the moment, you have to go into the Character menu, scroll through the drop down sets, check you’ve got the right one, then hit Equip. It’s irritatingly long-winded, but crafting itself is pretty fun, and with a separate levelling up system for each talent it becomes a game in itself. 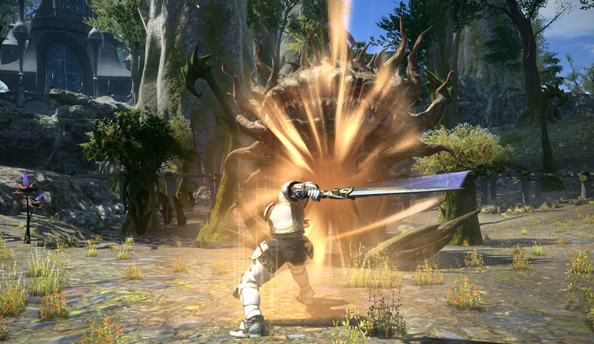 My time in Eorzea was short – two weekends worth of testing time – but I was left thoroughly impressed. The difference between A Realm Reborn and the original Final Fantasy XIV is astonishing. While the old game barely functioned, ARR feels natural, bringing in a few touches that should distinguish it within the crowded MMO market.

Players seem positive too. When I asked other players what they thought of the changes, my chat log was filled with people enthusing about how much better, smoother and smarter the game is.

Eorzea itself looks gorgeous. The leafy forests of The Central Shroud were lush and sun-dappled, while the quality and detail of the graphics are exceptional. Better still, this now feels like a Final Fantasy game. From the chocobo mounts to moogle postmen, red mage outfits to hi-potions, to the gorgeous sweeping music that accompanies you throughout…this feels more Final Fantasy than recent single-player FF titles could dream of being.

Yes, there are a few things that need ironing out. Things like a more detailed teleportation map, a pop-up explanation of character stats (essential when assigning attribute points), keybinds for gear changes, the ability to just type ‘/invite’ to bring someone into your party…small, but pertinent features that’ll ease and improve the MMO experience.

But look at what I’m saying. FFXIV had major problems that reduced the game to a broken, unplayable mess, whereas my complaints about FFXIV: A Realm Reborn concern the finer details that’ll make the difference between a good game, and a great game.

I’ve yet to see how larger features like the auction house, PvP and dungeon crawling pan out, but that this moment in time, I find myself playing other MMOs and wishing it was A Realm Reborn I was sinking my time into. Welcome back, Final Fantasy XIV. This is where you should’ve been three years ago.

There is currently a restriction in place preventing beta testers from talking about their experiences of the early testing phases of FINAL FANTASY XIV: A Realm Reborn. However, Square Enix has given us express permission to create this article in order to report on our initial impressions of the game, and the development progress so far.